{And the moon – We have determined for it phases, until it returns [appearing] like the old date stalk. (39) It is not allowable for the sun to reach the moon, nor does the night overtake the day, but each, in an orbit, is swimming. (40)} (Surat Yasin 36).

(Skywatchers all over the world will be able to see an extraordinary supermoon on November 14 at 00:00 UTC. The moon during this event will look 15% bigger and 16% brighter than a typical full moon because the peak of its full phase coincides with the peak of its perigee this month at a distance of 356 thousand kilometers from Earth.

Despite the fact that moon perigee takes place every month, but those that miss the 14th of November’s supermoon will have to wait until November 25, 2034, to see a supermoon appear this close and thus large again, according to NASA.

The Slooh Community Observatory will offer a live broadcast for November’s full moon. You can also watch it live on Space.com, courtesy of Slooh.

Full moons occur when the moon is behind the Earth opposite to the sun, and the three celestial bodies all line up.

The term supermoon describes a full moon that appears larger and brighter than normal because it’s closer to us. This occurs when the full moon falls on the same day as perigee, the point in the moon’s orbit when it is closest to the Earth, according to NASA. (Moon perigee can occur during other lunar phases too).

The moon’s orbit around the Earth isn’t a perfect circle, so during each orbit, the moon reaches perigee and a maximum distance that is called apogee.

The supermoon normally looks 14% larger than it does during apogee, and up to 30% brighter, NASA officials have said.

How  Is It Related to Tides?! 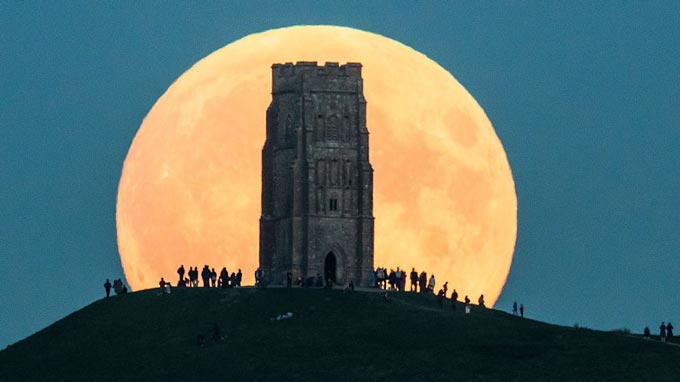 Tides will be a little higher on the perigee day. Those who live near the ocean will experience tides that are slightly larger than usual. Such occur when the moon is at new or full phase.

That’s because, at these times, the Earth, moon and sun are all aligned with each other, and the gravitational tugs of the latter two objects act in concert on Earth’s oceans.

Sky & Telescope Magazine suggests that the tides on the 14th of November 2016 will be about give five centimeters higher due to the presence of the supermoon. “The largest difference occurs in certain areas like Alaska coast, where the range of the tide may be increased by around 15 cm,” officials with the U.S. National Oceanic and Atmospheric Administration’s National Ocean Service wrote in a spring-tide explainer. “But considering that these areas have an average tidal range of more than nine meters, the increase is but a small percentage of the whole (less than a 2% increase).”

It is possible that the moon looks extra-large to you if you see it near the horizon. Yet, this is a different well-known effect and not an astronomical phenomenon that is called the “Moon Illusion.”

Scientists suggest it may result because viewers can easily compare the moon to nearby buildings, or because human brains just process objects on the horizon as larger than objects of similar size high in the sky.