Science always taught us to think outside the box, get out of templates, step out of the crowd and put restrictions aside. A couple of years ago, NASA’s Fermi Gamma Ray Space Telescope surprised the entire world with an unexpected finding: “Thunderstorms make antimatter,” a bombshell which hit the world and especially scientists. Fermi telescope observed that Gamma rays shot by lightning interact with atoms in the atmosphere to form electrons as well as positrons.

Antimatter is believed to be the opposite of the “matter”, with matter making up everything we see around us in the universe from rocks to the stars. It was first thought about during the last decades of the 19th century and the beginning of the 20th century, and theoretical thinking about it revolved around believing that antimatter became a non-existing form a few seconds after the start of the Big Bang.

Hence, only the remaining number of matter atoms and particles which didn’t find their opposite (positive counterparts) to collide with, succeeded in maintaining their continuous existence to form everything in the Universe as we know it.

Decades after the rise of this theoretical thought, it got modified. Physicists predicted antimatter could still be there in the high-energy regions of the universe. This was a revolutionary idea and European countries managed in 1954 to establish the Conseil Européen pour la Recherche Nucléaire (CERN) in Geneva, Switzerland with one of its aims to conduct experiments to understand the concept of antimatter and try to reproduce it artificially.

Scientists needed to invent scientific equipment which could artificially form a suitable surrounding for subatomic particles to interact, since such surrounding isn’t found in Earth’s natural environment. These devices are called Particles Accelerators (PAs) which are nicknamed “Atom Smashers”. 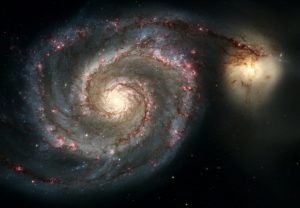 Through these accelerators scientists detected during the mid 1900s something positively charged with similar mass to the negatively-charged Electron, and gave them the name Positron (the antiparticle of negative charged electron).

The production of antiparticles in CERN laboratories hasn’t stopped ever since. However, such laboratory-made antiparticles didn’t answer the question of the absence of detectable remaining antimatter in universe.

Then came NASA’s announcement on January 11th which proved that antimatter is naturally found in the universe without any extraordinary artificial work from human beings. This latest finding by NASA means that antimatter is found daily over our heads in the sky somewhere around the world and lightning simply forms it.

Despite all our scientific achievements since the beginning of humanity and despite all the technological progresses we have reached, we weren’t able to note this phenomenon which occurs just a few kilometers away from us.

We still have a lot to learn as it is believed that we only observe 4% of the universe so far. God informs us in Qur’an: (And you are not given aught of knowledge but a little) (Al-Isra’: 85). This gives us a glimpse of our limited senses. Things that we can’t witness with our senses don’t mean that they don’t exist.

Isn’t it interesting how scientists could insist for decades or even centuries that something doesn’t exist based on the scientific proofs of their time, only to discover later that it existed all along? The Qur’an also says (We will soon show them Our signs in the Universe and in their own souls, until it will become quite clear to them that it is the truth. Is it not sufficient as regards your Lord that He is a witness over all things?) (Fussilat: 53) 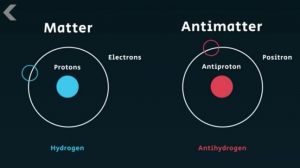 Studying antimatter could result it vital breakthroughs for humanity in fields like medicine, fuel, power supply and energy.

For instance, antimatter experiments developed the method of Positron Emission Tomography (PET), which detect cancer cells through the interaction between matter and antimatter.

Antimatter could also be used in military and weaponry applications. Since we know that mixing matter with antimatter leads to their annihilation, developing a weapon that emits antimatter to vanish matter particles could be possible.

When this weapon gets directed to shoot at an enemy soldier, aircraft, tank, or rocket (which are all forms of “matter”) it will lead to the extinction of that enemy target. My idea is to make an antimatter shield along with it to work as a repeller for antimatter particles while protecting the matter particles behind the antimatter weapon. Dr. Michio Kaku, a theoretical physicist and presenter of the Science Channel show “Sci Fi Science: Physics of the Impossible” also played around with the idea of antimatter as a weapon when pondering how to destroy the imaginary Star Wars enemy ship called the Death Star.