The requirements that God puts upon every Muslim are not overwhelming or overly burdensome.
aaa

I remember a conversation I recently had with my neighbor and friend who happens to be a non-Muslim.

As I had just returned from an Islamic conference, I mentioned that to her, she looked at me with worry and asked:

“No one advocates extremism at these sorts of things, do they?”

I almost laughed, but realizing the seriousness of the situation, and I reassured her that no, advocating extremism was definitely not on the agenda.

I was struck by the unfortunate irony that extremism is often associated with Islam when in fact, moderation is supposed to be one of the most fundamental aspects of the Muslim’s creed. The Quran clearly states:

Thus We made you a “wasat” (moderate) nation, that you might be witnesses for all of humanity, and the messenger a witness over yourselves. (2:143)

The word “wasat” in Arabic can be defined in several ways. It means just, balanced, moderate, and the best.

This verse clearly explains the view Muslims have that God wants them to be a balanced and moderate nation so that they may serve as a “witness” or model for the rest of humanity.

So what, exactly, does moderation in Islam look like?

The Opposite of Moderation

One of the best ways to understand something is to first study its opposite, so I’d like to begin with a brief explanation of extremism.

Extremism is a belief in ideas that are very far from what most people consider correct or reasonable. Whether too liberal or too harsh in their understanding of Islam, both kinds of “extremists” partake in things and hold opinions that are not in line with “normative” Islam. Needless to say, both greatly hurt the image of Islam in their own way.

A story about the Prophet Muhammad (peace be upon him) often comes to my mind. It tells of three men who asked the Prophet’s wives about his worship. When they vowed to pray all night, or fast every day or refuse to marry, the Prophet said:

By Allah, I fear Allah the most and among you I know Him the best; I fast but not every day, I pray at night but not all night, and I marry women; whoever does not wish to follow my way, he is not from me.  (Al-Bukhari and Muslim, 143)

The Prophet warned his companions against extremism and always advocated moderation in everything. When given two choices, he always chose the easiest, so long as it did not violate the rules of Islam.

Islam advocates a middle course in everything. This includes the way Muslims follow God’s commands, the way they think about God and the way they interact with and invite others to Islam.

Often, out of enthusiasm and ignorance, a Muslim may take on much more than he or she can handle in the way of acts of worship. To help us understand this, I’ve made up a short story about a young Muslim named Adam:

Adam has always tried his best to at least pray his obligatory prayers.

One Friday, he heard an amazing sermon about the commendable acts of worship the Prophet (peace be upon him) used to perform. He became extremely motivated and made a list of similar acts he wanted to do every day.

The list included: praying the additional twelve rakah (units of prayer) that accompanied the obligatory prayers, reading one juz’ (part) of Quran every day, fasting every Monday and Thursday, praying at least one hour in the last third of every night, and visiting a sick person or orphan every week.

He decided he would do all of these things, in addition to attending his normal university classes and working at his part time job. The first day he fulfilled everything on his list. And the second day, he had to work and so wasn’t able to read any Quran at all; he went to work feeling like a zombie.

The third day, again exhausted and feeling spiritually drained, he slept through fajr prayer, was late to university, and when he tried to fast, he felt weak and dizzy. In addition to that, he began feeling depressed and angry.

Why was Islam so demanding?

How was he supposed to function under all this stress?

Maybe he wasn’t cut out to be a good Muslim after all. That night he was miserable. He looked at his list and felt like a failure. And he decided he wasn’t even worthy of standing before Allah for the obligatory prayers. He even started to wonder how God could be the Most Merciful if what He was requiring of his servants was so difficult.

How many Muslims can relate, at least in part, to what our fictional friend Adam has gone through?

Enthusiasm coupled with ignorance caused Adam to take the advice of one sermon and abruptly change his entire lifestyle overnight. Not only did this wreak havoc on him physically, but it almost destroyed him spiritually. He felt like a failure, and even began to doubt in the mercy of God.

The Prophet (peace be upon him) said regarding Islam:

This religion is one of ease and not restrictions; no one tries to make it strict or difficult, but will be overcome [him]; therefore do what is right, and do what you are capable of, and be happy, and seek help by performing prayers. (Al Bukhari, 39) 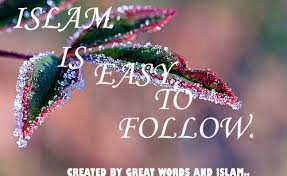 As in our fictional story, a person might make things so difficult for himself/herself that in the end, he/she is “overcome” and almost loses his/her faith.

One might compare this to someone who has only just jogged a few miles in his life trying to train himself for a marathon (a race the distance of 26.2 miles, or 40 kilometers) in just one week.

This person, regardless of his intentions, would definitely fail, and may even hurt himself so much physically in the process that he would be unable to jog or run again for years.

Running a marathon is challenging, sure, but it’s not impossible. However, even serious runners must train for months before successfully completing such a race.