Walking towards God, and throughout the process of building up and taming one’s soul, moderation and avoiding extremes should be practiced, as instructed by Prophet Muhammad
aaa

The capacity, power and aptitude of humans vary.

The Prophet (peace be upon him), considerate of and attentive to this fact of human nature in his education of recent converts, did not overburden them with duties, commands and prohibitions.

He did not distract them with virtues, supererogatory worship and recommended acts of piety and kindness.

Rather, he would direct the whole energy of a recent convert to the basic pillars of Islam – the shortest path leading to God, the Most Exalted:

“My servant approaches Me with nothing more beloved to Me than the religious duties I have enjoined upon him.” (Al- Bukhari)

A man came to ask Prophet Muhammad (peace be upon him) about Islam.  The Prophet said:

“(You have to perform) five prayers (throughout) every day and night.”

“Do I have to do anything else?”

“No, unless you do it voluntarily.”

“And (you have to observe) fasting the month of Ramadan.”

“Do I have to do anything else?”

He (peace be upon him) said: “No, unless you do it voluntarily.”

The Prophet (peace be upon him) told him about Zakah (obligatory charity).

The man asked: “Do I have to do anything else?”

“No, unless you do it voluntarily.”

The man went away, saying, “By God, I will do no more or less than this.”

“If he is true to his word, he will be successful (i.e. he will be granted Paradise)” (Al-Bukhari)

His first inculcation of Islam was restricted to the basic principles, and prohibitions of the absolutely forbidden, through which the Prophet (peace be upon him) brought recent converts to the threshold of a Paradise as wide as the heavens and earth.

“Any servant (of God) who (regularly) offers the five (obligatory daily) prayers, fasts the month of Ramadan, pays Zakah and avoids the seven grievous sins, will have the gates of Paradise opened for him, and will be told, ‘Enter in peace.’” (An- Nasa’i)

A man asked Prophet Muhammad (peace be upon him):

“O Messenger of God, tell me, if I pray the prescribed prayers, observe the fasting of Ramadan, treat the lawful as lawful and the forbidden as forbidden, and do nothing further, will I enter Paradise?”

He (peace be upon him) replied:“ 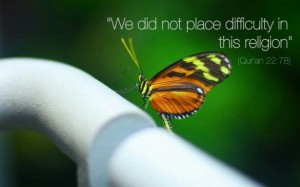 The foundation phase involves minimum obligations – performing only the five pillars of Islam and avoiding the seven grievous sins.

{If you avoid the major sins which you are forbidden, We (God) shall remit from you your sins, and admit you to a noble entrance (Paradise).} (4:31)

In this way, entry into Paradise is attained.

The phase of rushing and competing to attain the highest degrees therein depends on each person’s love and energy for acts of piety, obedience, remembrance, and drawing near to God:

{those who remember God, standing, sitting, or lying down on their sides, and think deeply about the creation of the heavens and the earth, (saying), “Our Lord, You have not created (all) this without purpose.”} (3:191)

Climbing continues, getting higher and higher, until the ardent seekers are uplifted to the soaring heights phase where life, all life, and death, are for the Sake of God.

Walking towards God, and throughout the process of building up and taming one’s soul, moderation and avoiding extremes should be practiced, as instructed by Prophet Muhammad (peace be upon him):

“The religion (of Islam) is easiness, and none would overdo religion without it overpowering him.”

Anything that may turn people away from their religion, make them feel burdened by its obligations, or put them into hardship, violates the merciful guidance of Prophet Muhammad (peace be upon him) so much that he supplicated:

A man complained to Prophet Muhammad (peace be upon him) about Mu‘adh prolonging the Fajr (Dawn) Prayer by reciting the Chapter of Al-Baqarah (286 verses) or Al-Nisa’ (176 verses).

This made the Prophet (peace be upon him) extremely angry and he reproached Mu‘adh, saying:

“O Mu‘adh! Are you putting people to trial? (He said this three times). Would that you prayed with (short Quranic chapters, such as Chapter of Al-A‘la) {Glorify the Name of your Lord, the Most High…}, or (Chapter of Al-Shams) {By the sun and its brightness…}, or (Chapter of Al-Layl) {By the night when it covers (the light…)}; for behind you pray the old, the weak, and those who have a need.” (An-Nasa’i)

His reproachful words “O Mu‘adh! Are you putting people to trial?” serve as a reminder of the prohibition which the Prophet (peace be upon him) lays on anyone who may turn away or overburden people, whether by words or deeds, and so obstruct them from God’s Path.