The Treaty of Umar allowed the Christians of Jerusalem religious freedom, as is dictated in the Quran and the sayings of Muhammad.
aaa

Jerusalem is a holy city to the three largest monotheistic faiths – Islam, Judaism, and Christianity.

Because of its history that spans thousands of years, it goes by many names: Jerusalem, al-Quds, Yerushaláyim, Aelia, and more, all reflecting its diverse heritage. It is a city that numerous Muslim prophets called home, from Suleiman and Dawud to Jesus (peace be upon them).

During the Prophet Muhammad’s life, he made a miraculous journey in one night from Makkah to Jerusalem and then from Jerusalem to Heaven – the Isra’ and Mi’raj. During his life, however, Jerusalem never came under Muslim political control. That would change during the caliphate of Umar ibn al-Khattab, the second caliph of Islam.

During Muhammad’s life, the Byzantine Empire made clear its desire to eliminate the new Muslim religion growing on its southern borders.

The Expedition of Tabuk thus commenced in October 630, with Muhammad leading an army of 30,000 people to the border with the Byzantine Empire. While no Byzantine army met the Muslims for a battle, the expedition marked the beginning of the Muslim-Byzantine Wars that would continue for decades.

During the rule of the caliph Abu Bakr from 632 to 634, no major offensives were taken into Byzantine land. It was during the caliphate of Umar ibn al-Khattab, that Muslims would begin to seriously expand northwards into the Byzantine realm. He sent some of the ablest Muslim generals, including Khalid ibn al-Walid and Amr ibn al-‘As to fight the Byzantines.

The decisive Battle of Yarmuk in 636 was a huge blow to Byzantine power in the region, leading to the fall of numerous cities throughout Syria such as Damascus.

In many cases, Muslim armies were welcomed by the local population – both Jews and Christians. The majority of the Christians of the region were Monophysites, who had a more monotheistic view of God that was similar to what the new Muslims were preaching. They welcomed Muslim rule over the area instead of the Byzantines, with whom they had many theological differences.

By 637, Muslim armies began to appear in the vicinity of Jerusalem. In charge of Jerusalem was Patriarch Sophronius, a representative of the Byzantine government, as well as a leader in the Christian Church. Although numerous Muslim armies under the command of Khalid ibn al-Walid and Amr ibn al-‘As began to surround the city, Sophronius refused to surrender the city unless Umar came to accept the surrender himself. 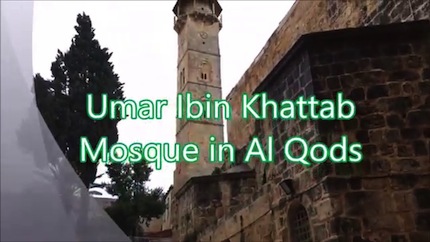 Having heard of such a condition, Umar ibn al-Khattab left Madinah, traveling alone with one donkey and one servant. When he arrived in Jerusalem, he was greeted by Sophronius, who undoubtedly must have been amazed that the caliph of the Muslims, one of the most powerful people in the world at that point, was dressed in no more than simple robes and was indistinguishable from his servant.

Umar was given a tour of the city, including the Church of the Holy Sepulchre. When the time for prayer came, Sophronius invited Umar to pray inside the Church, but Umar refused. He insisted that if he prayed there, later Muslims would use it as an excuse to convert it into a mosque – thereby depriving Christendom of one of its holiest sites. Instead, Umar prayed outside the Church, where a mosque (called Masjid Umar – the Mosque of Umar) was later built.

The Treaty of Umar

As they did with all other cities they conquered, the Muslims had to write up a treaty detailing the rights and privileges regarding the conquered people and the Muslims in Jerusalem. This treaty was signed by Umar and Patriarch Sophronius, along with some of the generals of the Muslim armies. The text of the treaty read:

“In the name of God, the Merciful, the Compassionate. This is the assurance of safety which the servant of God, Umar, the Commander of the Faithful, has given to the people of Jerusalem. He has given them an assurance of safety for themselves for their property, their churches, their crosses, the sick and healthy of the city and for all the rituals which belong to their religion.

Their churches will not be inhabited by Muslims and will not be destroyed. Neither they, nor the land on which they stand, nor their cross, nor their property will be damaged. They will not be forcibly converted. No Jew will live with them in Jerusalem.

The villagers may remain in the city if they wish but must pay taxes like the citizens. Those who wish may go with the Byzantines and those who wish may return to their families. Nothing is to be taken from them before their harvest is reaped.

If they pay their taxes according to their obligations, then the conditions laid out in this letter are under the covenant of God, are the responsibility of His Prophet, of the caliphs and of the faithful.” (Qtd in The Great Arab Conquests, from Tarikh Tabari)

The Treaty of Umar allowed the Christians of Jerusalem religious freedom, as is dictated in the Quran and the sayings of Muhammad. This was one of the first and most significant guarantees of religious freedom in history.

While there is a clause in the treaty regarding the banning of Jews from Jerusalem, its authenticity is debated. One of Umar’s guides in Jerusalem was a Jew named Kaab al-Ahbar. Umar further allowed Jews to worship on the Temple Mount and the Wailing Wall, while the Byzantines banned them from such activities. Thus, the authenticity of the clause regarding Jews is in question.

What is not in question, however, was the significance of such a progressive and equitable surrender treaty, which protected minority rights. The treaty became the standard for Muslim-Christian relations throughout the former Byzantine Empire, with rights of conquered people being protected in all situations, and forced conversions never being a sanctioned act.

Revitalization of the City

Umar immediately set about making the city an important Muslim landmark. He cleared the area of the Temple Mount, where Muhammad (peace be upon him) ascended to heaven from. The Christians had used the area as a garbage dump to offend the Jews, and Umar and his army (along with some Jews) personally cleaned it and built a mosque – Masjid al-Aqsa – there.

Throughout the remainder of Umar’s caliphate and into the Umayyad Empire’s reign over the city, Jerusalem became a major center of religious pilgrimage and trade. The Dome of the Rock was added to complement Masjid al-Aqsa in 691. Numerous other mosques and public institutions were soon established throughout the city.

The Muslim conquest of Jerusalem under the caliph Umar in 637 was clearly an important moment in the city’s history. For the next 462 years, it would be ruled by Muslims, with religious freedom for minorities protected according to the Treaty of Umar. Even in 2012, as fighting continues over the future status of the city, many Muslims, Christians, and Jews insist that the Treaty maintains legal standing and look to it to help solve Jerusalem’s current problems.