Abu Bakr had the honor of being amongst the first people to embrace Islam. He was, so to speak, there at the birth of Islam.
aaa

Just imagine for a moment that your neighbor and best friend drew you aside and told you in all seriousness that he was a messenger from God and that the message he had been entrusted with was amazing and terrifying.

How would you react?

What would you think?

To answer these questions you do have to suspend reality. It is not enough to say:

“Well that is not going to happen because Prophet Muhammad was the last prophet”.

You would feel a little bit strange wouldn’t you, actually you would probably wonder if friend had been working too hard or coming down with the latest flu bug going around.

This is the situation that Abu Bakr was in on the fateful day more than 1400 years ago.

Among the First Muslims

Let us try a little bit harder to really build up an image the events that occurred just prior to Abu Bakr accepting Islam.

According to reliable sources, when Abu Bakr returned from what we would today call a business trip, he was drawn aside by some in his circle of friends who whispered, probably anxiously, that Muhammad had declared himself a messenger of God.

Wisely, and wisdom is a trait that we have come to associate with Abu Bakr, he refrained from gossiping and made his way straight to his close friend to verify what he had heard.

Now that you have that image in your mind try imagining how you would act in a similar situation, can feel some of the shock waves that must have been overwhelming Abu Bakr?

What exactly do we know about this momentous event?

Abu Bakr had the honor of being amongst the first people to embrace Islam.

He was, so to speak, there at the birth of Islam.

He and Prophet Muhammad were distant relatives; both members of the same tribe, the Quraish.

It is believed by some scholars that they both traveled in the same caravan to Syria when Prophet Muhammad was 12 years old and Abu Bakr approximately 2 years younger.

They were childhood acquaintances who grew up to be reliable, honest traders and businessmen.

When Prophet Muhammad married his first wife Khadijah they lived next door to each other and became close friends.

They also recognized each other as kindred spirits; neither man had ever prostrated to an idol, both of them recognized that statues and idols were not worthy of worship.

Thus knowing what we do about the character of both men it is easy to imagine that instead of staying to waste his time gossiping about his best friend Abu Bakr went straight to Muhammad to hear what he had to say about the apparently momentous events that took place in his absence.

Perhaps the men who surrounded Abu Bakr at his return they were behaving a little bit like people of the 21st century, rolling their eyes at each other or snickering behind their hands.

It is hard for us to know what to say when people begin to gossip about your friends. Do you walk away, join in, or stick up for your friend. Apparently it was not hard for Abu Bakr, did none of those things. He then went straight to his friend to find out the truth of the matter.

When he arrived at Muhammad’s house he heard all the details about the experience in the cave with the angel Gabriel. He did not immediately try to find a more rational explanation for his friends experience rather he felt nothing but joy for his dear confidante. 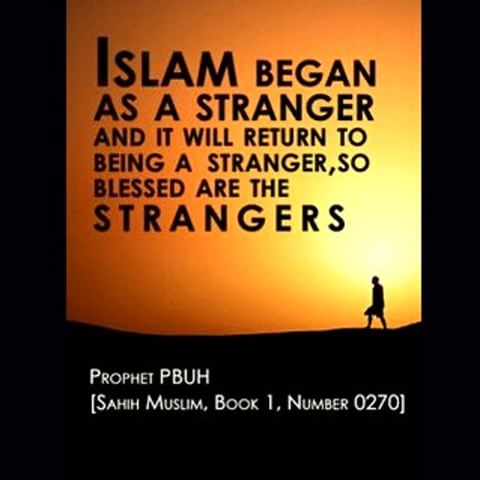 It is said that he stretched out his hand and asked Muhammad to invite him to your religion declaring that he really was a prophet of God.

When Abu Bakr heard the words there is nothing worthy of worship but God and that he (Muhammad) was the messenger of God, he accepted Islam without any reservations.

Years later Prophet Muhammad would remark that when he called people to Islam, everybody thought over it, at least for a little while, but this was not the case with Abu Bakr, he accepted it without hesitation. And this by anyone’s standards was a big deal.

Abu Bakr recognized the truth and accepted it quietly and without a fuss. His conversion bought many people to Islam because he made no secret of his acceptance of his friend’s message.

Abu Bakr was proud and honored to have been chosen, he was also proud and overjoyed that his friend had been honored by God.

Nowadays many people do not realize how amazing it is to be chosen by God. Yes chosen!

It is God alone that guides a person to Islam. Sometimes God is gently nudging us in the right direction for a very long time and for other people it happens all at once. Occasionally it is just a word, or a sound, or a written sentence sent by God for the one special, chosen person.

The birth of Islam meant the coming together of many different people. At this stage there were no children born into Islam everyone was a convert. Everyone experienced the same exhilaration that we feel today when we accept Islam.

It is said that around that time there were less than 50 Muslims. It was indeed a fledgling nation not yet ready to spread its wings, but Abu Bakr had other ideas. He wanted to shout it from the rooftops.

Try to slip back into your imagination and feel what Abu Bakr was feeling. Those of us who have chosen Islam have experienced that feeling of wanting to stop people and say, “Hey, I know this amazing thing and I want to tell you all about it”.

Abu Bakr wanted to tell everyone about Islam but Prophet Muhammad considered the number of Muslims too small to risk exposure.

But Abu Bakr kept insisting and when God ordered Prophet Muhammad to make his message public they went to the Ka’bah, the house of God, together. There Abu Bakr proclaimed in a loud voice that there was none worthy of worship but God, and that Muhammad was his slave and messenger.

It was a birth announcement of sorts, Abu Bakr was saying, this is Islam so join us in this celebration.