Uthman was there at the birth of Islam and over 1400 years ago he was facing the same dilemmas that some new converts face today.
aaa

The man who would be the third caliph (or leader) of the Muslim nation was born in approximately 574 CE.

His name was Uthman ibn Affan and like Prophet Muhammad, he was born into the tribe of Quraish.

Quraish was the dominant tribe in Mecca and Uthman and Prophet Muhammad each belonged to one of the two most prestigious clans.

Prophet Muhammad was born into the Banu (clan) Hashim. Their responsibility was to provide food and water to the pilgrims visiting the Ka’bah, the sacred house of God.

Uthman on the other hand was born into the clan that came to be called Banu Ummaya. They were the strongest and wealthiest clan in Mecca.

Uthman was the golden child of Banu Ummaya. He grew up to be the most beloved of their young men.

He could read and write, and was a very successful merchant and trader. Uthman had traveled widely and had a reputation for being kind, compassionate, generous and pious.

Prophet Muhammad was also a successful businessman, trader and merchant. He was known amongst the Quraish as a trustworthy and honest man.

In Muhammad’s fortieth year he was given the revelation and began to spread the message of Islam.

At that time the many Meccans lived lives of abundance and their wealth was fiercely protected. Islam threatened that wealth.

The leaders of Mecca considered it their duty to put a stop to Islam because it seemed likely to cause disunity and hamper economic growth. Therefore when Prophet Muhammad began preaching his message it was done so in great secrecy but nevertheless people began to convert to Islam.

Prophet Muhammad gathered a small but loyal band of followers. Uthman ibn Affan was among a group of physically fit and successful men who were introduced to Islam by Abu Bakr, himself a wealthy and influential person.

Uthman accepted Islam easily partly because of the dreamlike vision he had experienced whilst on a journey home from Syria.

While trying to fall asleep Uthman had heard a voice calling out, “O sleepers arise because Ahmad has emerged in Mecca” it said.

Until his return he had heard nothing about the new religion.

Uthman contacted Abu Bakr who told him that he had taken an oath of allegiance to Prophet Muhammad and had accepted the new religion. He then took Uthman to see Prophet Muhammad.

When Prophet Muhammad’s message became public it threw Mecca into a state of unrest.

Many of the leaders were fearful about a loss of income. The message of only One God meant that the flow of pilgrims coming to the Ka’bah to worship the many idols would now slow down or even stop altogether.

As the ranks of Prophet Muhammad’s followers began to swell, the Quraish began a campaign of persecution and harassment against the new Muslims.

The Quraish were prepared to fight in defense of their idols and also in defense of the economic and social lifestyle. The campaign swiftly escalated to violence and abuse and not even members of their own families were safe.

The acceptance of Islam by Uthman led to a violent reaction within his own family.

Uthman’s father was dead but his uncle took it upon himself to try to restrain Uthman. He bound his arms and legs and locked him in a cupboard.

Both his mother and uncle wanted him to recant his conversion to Islam but he refused. His reserve was strong and eventually they had to release him.

Uthman also faced tough choices in his marriage. His wives refused to accept Islam and although he tried to convince them of the beauty of Islam eventually he had to divorce them. 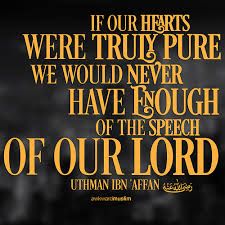 Uthman was there at the birth of Islam and over 1400 years ago he was facing the same dilemmas that some new converts face today.

His extended family was violently opposed to his choices; his close family refused to accept the changes in him and his lifestyle was severely disrupted.

Uthman faced many challenges and was confronted with trials and tribulations seemingly designed to test his faith and conviction. He remained steadfast and accepted that God would replace his once contented life style with something better.

Prophet Muhammad was impressed with Uthman’s conviction in the face of so much opposition.

He rewarded Uthman’s faith by allowing him to marry his own daughter Ruqayah. That was a cause for celebration but there was very little else to celebrate.

The relations between the new Muslims and the leaders of Mecca continued to deteriorate.

The weaker members of the Muslim community were subjected to torture and shocking abuse. And there seemed to be no end in sight. Prophet Muhammad then decided to send a small group of new Muslims to Abyssinia for their own protection.

Uthman and his new wife Ruqayah were among the group of 12 men and four women who made the first migration to Abyssinia. The King of Abyssinia was known to be a just man. Muslims lived easily under his patronage for approximately 12 months.

At that stage they heard rumors that all of Mecca had accepted Islam so they made the journey back only to find that that was far from the truth. The persecution had in fact escalated. Thus they had to return to Abyssinia this time taking many more new Muslims with them and many were the weaker members of the new religion.

From Abyssinia to Medina

When Uthman and the other migrants journeyed from Abyssinia to Medina, Uthman earned the nick name ‘the assistant’ because of the time he spent with Prophet Muhammad helping him to establish the new Muslim nation.

Uthman therefore understood the details of many Islamic rituals and thus was able to instruct others. He narrated 146 traditions directly from the Prophet himself.

It is said that he gave freely from his wealth and that every Friday Uthman would buy slaves for the purpose of setting them free.

Uthman Ibn Affan was a witness at the birth of Islam. He is a role model for those who convert to Islam today because of his actions and steadfastness in the face of constant harassment.