I grew up in a dysfunctional family setting in the atmosphere of alcoholism, physical and emotional abuse that came from my father. Without a positive father figure, I was basically developing antisocial behavior and an inclination to violence.

At 13, I fell into association with similar children, but because they weren’t as driven as I was, I quickly became bored with them. I began to hang out with the young adult type who welcomed my willingness to participate with no reservations in anything under the title of alcohol, drugs, crime, violence and racism.

The period of reform school (adolescent jail) began, and that environment also shaped me, refining crime inclination to a full time skill. After 3 years of this (reform period) I was released. I was a walking grenade.

Searching for a point of focus to release this rage I got associated with paramilitary racist group of young adults. I participated in regular assaults on people and engaged in various criminal activities. At 16, I found myself incarcerated serving a 6 1/2 year sentence in the California Youth Authority for robbery, assault and weapons charges. Immediately I feel in step with the gangs of “white supremacy” and cultivated my rage and anger into pure “hate” of all people who were not “Anglo Saxon.”

I began correspondence with the KKK, and upon my release on parole, I was a full-fledged card carrying hate-monger. For the next 3-4 years, my activities were heavily involved in Klan cross-burnings, media appearances, night raids of beatings, property desecrations, etc. My parole was violated for possession of weapons and suspicion of robberies.

This last violation of parole, at the age of 20, the search for peace began. In a haze of anger and rage, I found myself stripped naked in solitary confinement with not even a mattress. Only me and a styrofoam cup. I began to review my past and the negatives, which brought me to this point of reduction to the lowest terms.

While I was there my daughter was born. I began to assess my future. I thought of the many victims’ lives I had affected. I could see myself in prison for life if this past were to continue into the future. I said to myself, “Clint, you must make a choice between this evil or a future good.” It was clear to me there was no future (of longevity) in this evil. My family — mother, girlfriend, brothers — were afraid of me. I had become alienated from them. I began searching for a purity to purge the cancer of hate from inside me. I wanted to be loved and to love in a pure sense. I just didn’t want to “hate” anymore.

I moved to Montana and was arrested for burglary. I was sentenced and served 2 1/2 years of a 5-year sentence, and was then released on parole, which I successfully completed.

I became involved with human rights groups and I started my own human rights group, C.H.E.R.E. (Children Escaping Racist Environments). But I was still involved in crime. I took part in possession of explosives and was arrested by the federal government and sentenced to 35 months in federal prison. 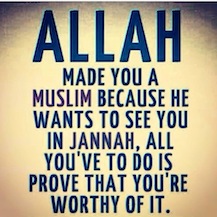 Here, an African American offered to assist me in my cosmetic needs. He said he was a Muslim. I asked this brother for some literature on Islam. I found out about the universality of it, how it transcends color, ethnicity and race. It sounded real and pure. It began to appeal to me.

This brother invited me to Jumah (Friday) service. I was given a Quran, and as I read the translation, I felt the purity and truth of it. There was no hocus-pocus, no spookism, no mysticism, just plain, simple understanding of the “Truth.” When I heard the Adhan (the call to prayer) I felt closeness to God that penetrated my heart and soul.

After some research and study of the Quran, I discovered its total infallibility, no contradictions in it. There are religions based on believing in certain sciences, multiple deities, the religion of 3 gods in one. I was a thinking man, and none of them made any logical sense to me.

Here was Islam, based on the belief in One God who created the creation itself out of nothing, and the fact that this book I was reading (Quran) had not one vowel or language changed in over 1,400 years was a miracle in itself. Thus, I was sold on the oneness of God and the unity of Islam.

Christianity has and is still undergoing changes, in the Bible and in the Christian doctrines, and cannot even claim originality of the Bible. There is only one God and one religion, and religion is “submission” to the one God. This is the meaning of Islam.

After years of falsehood, half-truths, following others on the road, and then, from within a place (prison) where more than one million people are cast away, the same environment that once honed my anger and hate to a razor sharpness was now the place where Islam greeted me and proceeded to change me into a “servant of (the Source of) peace.”

Islam filled the spiritual void by teaching me my beginning and end, has given contentment, a peace, a serenity to me these words cannot adequately describe. My purpose is clear, my direction is straight.

Islam has, through its truth, taught me humility and the true worship of God. I had learned that from God we came and to God we must return.

On the last day, it will not matter if I was black or white, rich or poor, powerful or weak in power, nor will it matter about all mankind. Rather it will be about one’s deeds good and bad that an individual is personally responsible for and will be punished and rewarded accordingly.

No one can die or be punished for my sins or be rewarded for the good I may do but me. I am responsible, I must answer when asked. I became aware of this truth and I declared openly, “There is no god but God and his last messenger is Prophet Muhammad-Ibn-Abdullah.”

I have found “truth” in God, Who has (many) names or attributes, one attribute is Salam (peace). The Creator, Originator of the very existence of peace. There is no peace but the peace of God (Whom all praise is due).