“Islam hates us.” Donald Trump, the Republican front runner for President of the United States of America, said in an interview with CNN.

To me this statement seems absolutely ridiculous, but let me explain for those who don’t feel the same.

When Trump says Islam hates us, it is like saying that Christianity hates The People’s Republic of China.

An idea or a system of belief cannot hate, or love, or have feeling at all. Belief systems are not people. They cannot love or hate. But what Trump is really saying, despite his lack of eloquence or understanding of belief systems, is that Muslims hate the US because of their faith. And while some Muslims have valid political complaints with the US, faith is NOT their basis of protest. It’s entirely political.

This is an entirely political issue and has nothing to do with the teachings of Islam.

Islam Does Not Hate America

Many Americans believe this line of thinking, that somehow Muslims hate America as a part of faith. But millions of Americans are Muslim who love their country and are happy to be called American. And have zero religious qualms about it.

“Negotiations on a formal treaty to establish ties between the two countries began in 1783. The Moroccan-American Treaty of Friendship was signed in 1786” (Source: http://www.embassyofmorocco.us/USMoroccorelationship.htm)

If Islam were against a country that is nearly 1100 years younger than it, why would so many American Muslims love their home? Why would a Muslim country be the first in recognizing its formation? Why would Allah say in the Quran: {We have created you from male and female and made you peoples and tribes that you may know one another} (49:13) if Muslims were meant to hate one particular nation and people?

Islam Does not Teach Hate of any Nation or Peoples

What’s more is that Islam does not target any country or peoples for hate. The Quran speaks about past people’s mistakes and transgressions toward Allah Almighty, as a lesson for future generation who are likely to go down the same path. But the religion of Islam does not advocate hate of anyone.

Allah sent Islam as a mercy to mankind. Allah says in the Quran:

And Muslims are instructed to treat all people with kindness, look out for their neighbor, and respect all people’s rights. The Prophet (peace be upon him) said:

“If anyone wrongs a non-Muslim, detracts from his rights, burdens him with more work than he is able to do or takes something from him without his consent, I will plead for him (the non-Muslim) on the Day of Resurrection.” (Abu Dawud)

Muslims are never taught to hate people, only evil actions, much like the Christian saying: “Don’t hate the sinner: hate the sin”.

Allah is the Creator of Love 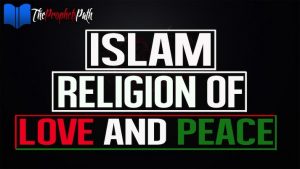 In Islam we know God, Allah, by His names that describe his perfect attributes. One of those names is Al- Wadood, the Most Loving, the owner and creator of love. Allah is not only the creator of love and humankind, but, Allah also wants us, his creation, to show loving kindness to all living things especially one another.

“Allah shows compassion only to those among His servants who are compassionate.” (Al-Bukhari and Muslim)

The Companions of the Prophet asked:

“Shall we be rewarded for showing kindness to the animals too?”

“A reward is given in connection for every living creature.'” (Al-Bukhari)

Islam advocates for tolerance, peace and compassion, but never hate.

Allah Almighty knows in His infinite wisdom that in dealing with people even between two Muslims, people’s feelings may be hurt. And we may even come to an emotional state where we hate each other. This is a part of the human experience.

But contrary to what people like Trump say, Islam does not promote these feelings. Allah recognizes that this will come up, and offers a remedy to hate in the Quran:

When differences arise, and we see each other doing evil, hard feelings are a natural consequence. But Allah in the above verse recommends each party to rid evil with that which is best, to extend an olive branch of good action.

It’s a simple solution: do good things for people who have done bad things to you and you will become close friends.

If we would just have the wisdom to heed our Creator’s directions, our world would be a much more loving place.