There was a quote that’s very famous and well-known now that when Malcolm X said that “I believe Islam is the only thing that can cure racism from the hearts of America.”
aaa

Interviewer: Our travel in the world of Islam had brought us to the United States of America, in Seattle, Washington, in the campus of the University of Washington.

We are being sponsored by the MSA here in the Islamic House.

And I’m joined by the director of the Islamic House, brother Ahmed James.

Interviewer: Thank you for inviting us and making this facility available for us to interview our young brothers and sisters who are studying here in the university.

But Ahmed as we begin, just tell us a bit about yourself and how you came to Islam.

Brother Ahmed: Well, I was born and raised here in Seattle, Washington. I was brought up in a roughly Christian background like many Americans.

My family wasn’t really practicing, and might go to church on special holidays a few times a year.

But other than that, I had no real religious upbringing until high school when I went to Catholic school and that’s when I started becoming interested in religion.

In more than just religion, I started becoming interested in, you know, those big questions that everyone has somewhere inside them: ”What happens when I die? What is the purpose of life?” And things like that.

So during high school I started reading about different religions. I took a comparative religions class that was actually offered at school, and I was taught about Buddhism, Hinduism, Islam, Darwinism and things like this, and I became very interested in no specific religion but just learning as much as I could about the different religions, and I guess Islam didn’t jump out of it at that point yet.

I think the first real expression or exposure to Islam that I had was in high school, I read the biography of Malcolm X, and it was a book that really changed my life, and it wasn’t like I wanted to be Muslim right away, but it just changed things for me.

Interviewer: But you know, I interviewed a lot of people and a lot of people said the same thing. Can you just expand a bit on about what was the impact of the book on you. When you first picked up the book, what did you expect? And when you finished it what was its impact on you?

Brother Ahmed: Well, I’ve also heard that. Every convert pretty much that I have ever met in my life or revert has said that if that book wasn’t the one thing that introduced them to Islam it was one of the major things, a very powerful book, amazing really.

But I mean for me, I grew up kind of in a hip-hop community and there was a music I liked to listen to, and stuff like that, and in fact the first time that I heard the word Allah was in hip-hop rap music!

Interviewer: But when you heard it, did you recognize it? 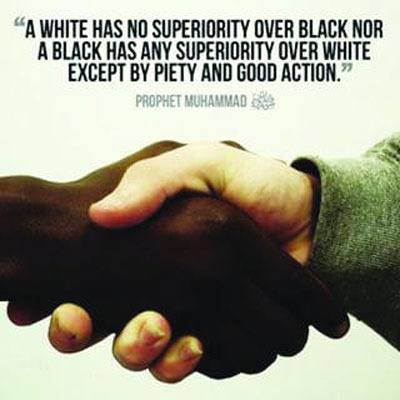 Brother Ahmed: Yeah, I mean it was kind of subconscious, you know, to me I was just bopping my head to the beat or something like that. It sounded good but it was like the seed was planted in me at that time, and you will hear a lot of it whether the rapper had proper understanding of Islam or not because there are a lot of Sunni Muslims in the African-American community that make the hip-hop music.

There is also Nation of Islam, Five Percent hip-hop known historically, and they would also talk about Malcolm X. A girlfriend of mine at the time actually was reading the book for school and I said “Yeah, I should read that. I want to know who this person is that people are talking about”. So I really didn’t know what I was getting myself into at the time.

But you know just as life, as a journey, made so reflective at that period of time in America, and also of today in America. America is a very racialized place, I mean racism is something we can’t escape from. And growing up in an inner city that is very multi-cultural, I could relate to many ways to Malcolm X’s journey. But when he went on the Hajj and he changed viewpoints a little bit, that’s when I was really impressed.

There was a quote that’s very famous and well-known now that when Malcolm X said that “I believe Islam is the only thing that can cure racism from the hearts of America.”

So that was my first exposure to Islam, but I was still searching for a path in life. I had some friends of mine in high school that died in car crashes and things like that, and actually I had a near death experience in a car crash also myself.

So I became more fed-up with the average high school life going to college as we see we’re here in the college campus there are beach parties held across the street where we have such parties everyday and something like that.

Interviewer: But not to get off track here, what’s it like being a Muslim and having this place in the midst of all the things which are around you?

Brother Ahmed: I think for me it’s a great reminder, because the Quran is a constant reminder of death and a constant reminder of the Afterlife, and you know this life is a test, and few people that are really engulfed at that and which that it is, it gives you a beautiful perspective and I think maybe a lot of people can be called to that. A lot of Muslims are drawn away from Islam by the allure of this dunya (life) really and the pleasures of dunya.

But I think when you come out of a place like this, when you come here and meet the brothers, and when you come here for a prayer, and you walk out amongst that, you have a different perspective, and you are not so sure in allure anymore. And being someone who was non-Muslim before, I think a lot of Muslim converts have a certain immunity to that because they know what it’s really like because they might have been at that party a few years ago and they know you might be in fond of it in a moment but the reality it’s not everlasting or eternal happiness.

Interviewer: But on the same point, how important would it be for a new student coming to a big university to make sure he comes to a group like the MSA, or associations that are affiliated with Muslims?

Brother Ahmed: I think you cannot put a price on how valuable that is. I mean the Prophet Muhammad (peace be upon him) said that you are the religion of your friends. I mean your heart is naturally drawn to like hearts and things like this, and being a minority in this environment in America in general and in the west is very hard to keep afloat without that.