If you look around, you can’t see any good people, start taking steps to improve the quality of your relationships.
aaa

In Part 1 of this article, the writer shed light on five types of useful friends mentioned in the Quran: a protective friend, a truthful and genuine friend, a companion, an insider who shares secrets and a close adviser.

In this second part, five more types of friends mentioned in the Quran are described and explained.

As a Khadhul, you are a very disappointing friend, a fair-weather friend. You act like a friend until the moment of truth and then you disappear out of sight when you are most needed.

None of us would like to think of us being this type of friend, but if we look at the best example of a Khadhul, Satan, and see some of the little things he does, insha Allah it will help you to avoid it.

And then, on the Day of Judgment, he will turn round and say that he only invited you to do all those things, but you were the one who chose to do them.

7- Khadn (Friend of the opposite gender you’re attracted to)

As a Khadn, you are placing yourself in a very dangerous situation, as you are dating and being intimate with someone. The Prophet (peace be upon him) said:

“Whenever two non-married people (of the opposite gender) are alone with each other, Satan becomes the third one between them.” (At-Tirmidhi)

And when Allah in the Quran is advising on the types of women to marry, He warns against the Khadn:

{So marry them with the permission of their people and give them their due compensation according to what is acceptable. [They should be] chaste, neither [of] those who commit unlawful intercourse randomly nor those who take lovers.} (4: 25)

If you find yourself slipping into a friendship with someone you’re attracted to, and you find yourself finding excuses to contact them, to have private conversations or meet them alone – even if this is under the pretext of inviting them to Islam or working on an Islamic project – check yourself to see if you are becoming a Khadn. It’s ok to be attracted to someone; Allah has placed this in our hearts, but you have to control it, as that is what Islam teaches.

As a Qarin, you have so much in common with your companion; you enjoy the same things and do everything together. You are known by others as your Qarin’s friend and asked about them if they aren’t with you. The thing about a Qarin is that you can have both good and bad Qarins. You can either lead each other to Paradise or you can lead each other into the Hell Fire!

{And whoever is blinded from remembrance of the Most Merciful – We appoint for him a devil, and he is to him a companion.} (43:36)

To get to Paradise, you may need to give up some of the Qarins that you used to have, although you can still keep in touch with them. You need to find the strength to pull away from them and look for Qarins who can help you and who you can help too.

9- Khalil (Friend who penetrates the heart)

As a Khalil, you think about your friends all the time and wish you were with them, because you feel that they have become part of you and you miss them when they’re not there. The more activities you do together, the more your bond of friendship strengthens.

This is the closest type of friendship that you can have Islamically and on the Day of Judgment they will be your only friends. This is the term that Allah used to describe Ibrahim. 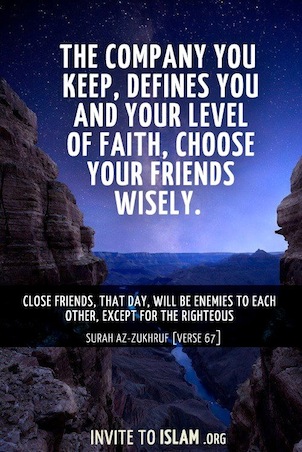 As a Rafiq, you help your friend to relax. In your company they feel comfortable and they don’t worry about what they say or do, as they trust and like you. They feel totally at ease in your company. They know that you are a good and a pious person and a great person to be around.

As a new Muslim you will recognize all these types of friendship, as they are seen the world over. Many of them overlapping and sometimes more than one type are present in a relationship. The difference now is that Allah gives His guidance to Muslims regarding their friendships and tells them which type of friendship is acceptable in His eyes and which will be rewarded and which punished.

It’s now up to you to look at your friends and work out whether they are people that will help you reach Paradise. And more importantly, it’s up to you to take a good look at yourself and assess what type of friend you are to others and whether what you are doing now will merit Allah sending you good companions.

If you look around, you can’t see any good people, start taking steps to improve the quality of your relationships. You don’t have to offer all the best types of friendship to everyone; as I mentioned above, some types of friendships are very rare. Just work on avoiding the ones Allah hates and work on developing the ones He loves, wisely.

As you turn to Allah, you will find that many of the people you thought of as friends will turn away from you and they may even eventually give up on you, as you begin to have little in common. But Allah has promised:

{And those who believe and do righteous deeds – We will surely admit them among the righteous.} (29: 9)

So have faith in Allah and His Plan for you, be the best you can be and seek out friends who will keep you on the Path to Paradise. And be wise in your relationships, choosing your friends carefully, and remember this powerful hadith from the Prophet (peace be upon him). He said:

“A person is on the religion of his friend, so look whom you befriend!” (At Tirmidhi and Abu Dawud)

Acknowledgements to Nouman Ali Khan whose talk this article is based on: http://www.youtube.com/watch?v=oo6_nJlFr0Q