God Almighty has ninety-nine beautiful names which we may know Him through. One of God’s Most Glorious names is Al-Hadi (The Guide).
aaa

{And that those who have been given knowledge, may know that it is the truth from your Lord, so that they may believe therein, and their hearts may find reassurance in it. And assuredly God guides those who believe to a straight path.} (Quran 22: 54)

Have you ever traveled to another city and gotten lost while driving to a destination?

The feelings of fear and anxiety soon overcome your senses as you try to navigate your way to safety.

You might pull out a map and try to determine another route to guide you to where you want to go. You might even stop to ask someone for directions or turn on your GPS to lead you back on the right track.

Regardless of the method used in charting your course, there are no guarantees that you will easily find a new path. Poor road directions, an outdated map or even a faulty GPS are just a few of the things that can go wrong when looking for guidance to take you from Point A to Point B.

There are so many other instances in life, besides driving, when we need some sort of guidance to help us find a solution to a problem or steer away from a precarious situation. For me, personally, getting to know my Lord was one of my biggest issues as a teenager. As I entered my teenage years, I found myself being bombarded with a host of negative situations and mass uncertainty.

As a Christian, my immediate family was not especially religious with the exception of paying lip service to their faith when they perceived it was being questioned. And despite the fact that at the age of sixteen years old I had very limited knowledge about the Islamic faith, and even less interest in exploring it, I still felt that there was a Divine Power steering me towards something that was much greater.

God Almighty has ninety-nine beautiful names which we may know Him through. One of God’s Most Glorious names is Al-Hadi (The Guide). All of God’s 99 Beautiful Names hold a special place in my heart; however Al-Hadi is the one that I have always relied upon even before I began my journey to Islam.

Looking back at certain intervals in my life when I was still a Christian, I can see how certain events “magically” turned in my favor and paved my way to the Islamic faith. It still baffles me even today that I emerged unscathed from the ambiguity of my early existence. Clearly God Al Hadi guided me out of the darkness into the light. There are three turning points that occurred prior to my conversion to Islam that, had it not been for God’s guidance, could have led me down a path to disbelief. 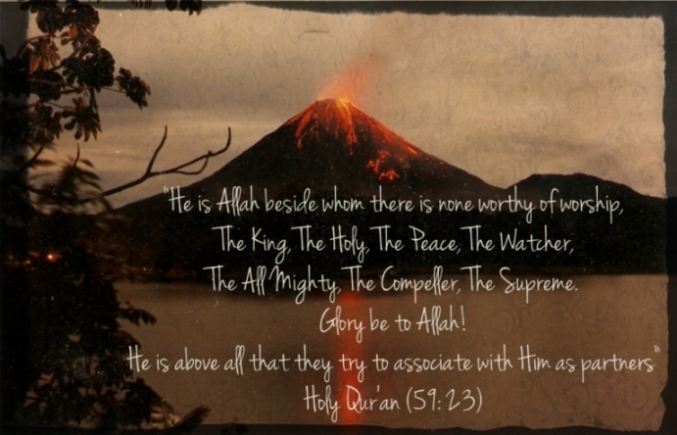 My parents met at a concert and soon got married. My mother was divorced twice before and already had two children from her previous marriages. During her marriage to my father, she gave birth to my older brother and me. By the time I was born, my father was no longer interested in being a parent and instead wanted to head out on a “Gold Rush” of his own making to the west coast of America.

He abandoned me when I was a newborn infant and my brother was only four years old. Growing up, we were both asked by caring teachers where our father was and why he never visited events at the school. My father’s absence never really bothered me. It hurt that I did not have a “dad” like other girls did, but I was somehow able to overcome it and had an innate drive to excel.

However, my brother was not as lucky. He had a severe abandonment issue that haunted him in every aspect of his life and led him down a road to ruin that was paved with human vice and degradation. My father’s abandonment, I feel, should have affected me the same way; but through God’s Guidance, it didn’t.

After graduating from high school, I set my sights on college. I would be the only female in my entire family to go to college and the only one of my mother’s children to earn a degree.

From the moment I entered the dormitory, I was inundated with a party atmosphere from most of my peers. All the girls could talk about was “hooking up” with so and so or sneaking into a bar for 25-cent drafts. One of my roommates, during my four years in college, was an alcoholic. I would often have to sleep in a room filled with the stench of alcohol and sometimes had to sleep on a sofa in the lobby.

For four years, I sat back and watched as my peers got “wasted” every other night and even found myself in situations where I was offered a whole range of intoxicants. Despite being in proximity to such vices, I was never interested in partaking in any of them. I was often ridiculed by my friends and humiliated for not being like them. I was an outcast and deemed a “nerd” for not partying like everyone else.

God Almighty raised me above my circumstances and guided my away from them. I thrived in college while participating in numerous campus activities and held down three jobs to earn extra money for necessities. It was God Almighty who guided me away from the negative influences and safeguarded me from the temptations that literally engulfed my peers.

Decision of a Lifetime

Even though God Almighty still guides every aspect of my life today, it was my decision to move to the Middle East over 16 years ago that was my greatest turning point.

The only things I had ever heard about Islamic countries were bad and yet here I was packing up my life to go to a place I knew nothing about. Some called me crazy and some said I was under the spell of my newly wedded husband.

Even today, I don’t have an answer as to why I decided to move thousands of miles away from the only country I ever knew. But what I do know is that within months of landing in a foreign land to live amongst strangers, it was God Almighty that guided me to the religion of Islam. It was through God’s guidance that I finally came to know about my Lord and become a believer in Islam.

Every inch of my being reverberates with the loving guidance that God Almighty bestows upon me every day, and I am so thankful to have been guided to the path that is straight.