This verse contains the glad tidings for a Muslim convert as well as the penitent who changed their whole lifestyle for the pleasure of God. All of the sins they did can become a mountain of riches with the Most High in heaven.
aaa

Have you ever offended someone so much that it seems as though they will never forgive you?

Have you felt like someone has done something that leaves you permanently scarred and unable to forgive them?

Wouldn’t it be great if there were a simple clear-cut method of earning someone’s complete and absolute forgiveness?

The fact is things don’t work that way with people, as all people are different and there are many who just cannot forgive others for certain things they have done. This is one example of our many imperfections.

The good news is that the only truly relevant forgiveness with major impact on us is the forgiveness of God who describes Himself as “Al-Tawwaab” or The Continual Accepter of Repentance.

Our Merciful, Loving and Forgiving Creator has outlined for us the simple steps to receive His absolute forgiveness and be of those who have earned His favor. It would be our own ignorance and arrogance that could lead us away from taking these steps.

This brings us to the next characteristics of the servants of The Merciful: returning to God in penitence, behavior refinement and persistence in righteousness. After mentioning how falling into the major sins and not preserving the major objectives of faith would put someone in danger of punishment in the hereafter (Quran, 25:68-69), God incites our hope and return to Him by saying,

Except those who repent, have faith and do righteous deeds for it is those whom God will replace their bad deeds with good deeds. God is continually Forgiving and Merciful. Whoever returns to God and does righteous deeds then he has truly turned to God in repentance. (Al-Furqan, 25:70-71)

Apparently, our scholars tell us that the repentance or what we call “tawbah” in Arabic is required from the major sins. As mentioned in the last article, the verses before these condemned those who commit major sins such as polytheistic worship, murder, and fornication with a grave punishment in the hereafter.

If these steps are taken then as the verses above indicate, that person’s life would improve and the sin(s) they committed would be replaced with good deeds. This is all the result of the blessing of God’s forgiveness. Even more spectacular is that we are supported with the following authentic hadith which shows that in addition to this worldly change, on the Day of Judgment all the sins that we repented from will be counted as good deeds in our account with God! It is narrated that:

“…a man is about to be judged for his major sins on the Day of Judgment and they are gone and [as] he was remembering what he had done, it is said to him, ‘Indeed you will have a good deed recorded for each bad deed’…” (Muslim)

This verse contains the glad tidings for a Muslim convert as well as the penitent who changed their whole lifestyle for the pleasure of God. All of the sins they did can become a mountain of riches with the Most High in heaven. Sadly, many hear this and do not change their ways, telling themselves that ‘one day I will embrace Islam fully and obtain these great blessings’. 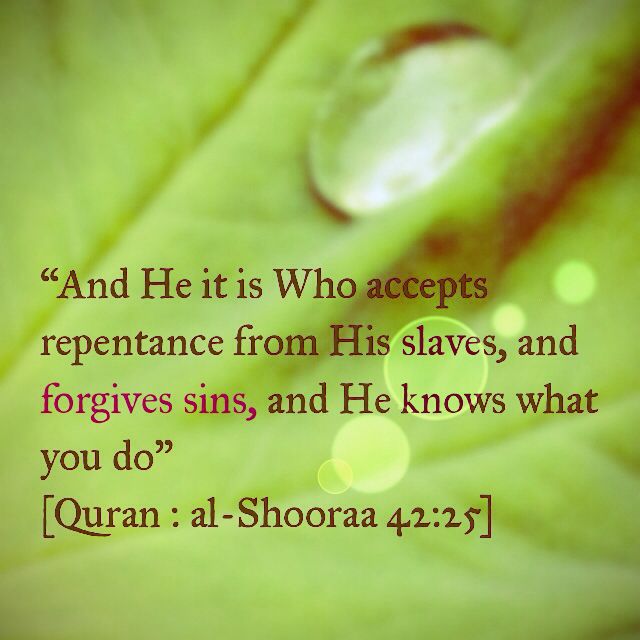 That is not a statement of real faith; such false claims will not bring forth the fruits of divine blessing. It may be that even if that person someday repents and embraces faith, God judges them for their false sincerity and all they did in the time they knew the truth but their desires held them back.

This is indeed the nature of the Forgiving, Merciful, Pardoning One who wipes out sins and replaces them with good deeds. In light of what we mentioned in the first part of this article, we need to take a moment to think about what it means to know God and His attributes.

There is an authentic hadith which says whoever “Ahsaa” (counts) the titles of God will go to heaven. According to some commentators this hadith does not mean whoever memorized God’s names, but whoever understood and was affected by their meanings. This understanding is supported by a statement of one of our early scholars, to “Embody the characteristics of God”. This means that we should be forgiving and merciful to others.

We shouldn’t allow what someone has done to completely turn us against them indefinitely. I mean, it is one thing if they announced their hatred for us and never changed. On the other hand if we expect God to forgive us, we should be fair and forgiving to any person coming to us asking our forgiveness. If this person is family we are obliged by the Almighty to show them respect and kindness to them until our last breath because they are from us, and we from them, and that is a relationship made by God and we must uphold it.

May God forgive us, accept our repentance and make us of those who forgive others thus making us of His true servants! Ameen.