“In the name of Allah, the most Merciful and the most Beneficent.”

Did you know that Allah starts every chapter in the Quran with “In the name of Allah, Most Gracious, Most Merciful.”, with the exception of Chapter 9 – Surat At-Tawbah, meaning “The Repentance”?

This introductory verse of every chapter serves as a reminder to all who read the Quran that He is Most Gracious, and the Most Merciful.

Sometimes we need that reminder when we are feeling down about something we’ve done, or something that we are going through.

He wants us to know that anything is possible through Him, if we just seek Him out for His help and forgiveness.

Do You Feel That Allah is Being Unfair with You?

Life is a test.

I’m sure you’ve heard this phrase a thousand times in the past, and it doesn’t always make you feel better, but let’s look at it from a different perspective.

Say for example that you are taking a test which you did not prepare for, and resorted to cheating on the test, and the teacher catches you in the act, yet forgives you and allows you to continue, you will pass the test, but you didn’t pass the test fairly. 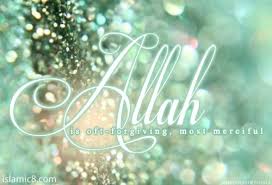 If Allah lets everything you do wrong slip through, and you don’t ask for forgiveness of those wrong doings, you will not pass the test of life. On the Day of Judgment when He asks you about your sins, what would you say to Him? Would you say:

“But Allah, you let me go through life without punishing me for it, so I thought You didn’t mind!”

But did you ask Him to forgive you for those acts?

If not, you will probably face the consequences in the Hereafter instead of during this life. Look at how we see some of the worse of humankind doing the worst sins, but live a glamorous lifestyle… it is because they will face their punishment in the Hereafter!

{And return [in repentance] to your Lord and submit to Him before the punishment comes upon you; then you will not be helped.} (Quran 39:54)

When would you rather face the consequences now or later?

So, if you feel that you are being punished, or living in misery in this life, say alhamdulillah because Allah was merciful with you to give it to you in this life, to avoid the consequences in the Hereafter. It seems more than fair if you look at it that way, right?

Why Am I Going through such Hard Times?

We face struggles all through our life, and if Allah wants to purify us, He will give us trials. If Allah loves us, He will put us through hardships according to the level of our faith. Be sure that if you have good in your heart, He will reward you with better than what was taken from you, or hardships you have faced.

Sometimes our hardships are from our own bad choices in life. We learn from experience. If we make a wrong choice, we can find ourselves in hardship, and then tend to blame Allah for our choice.

Even though it may seem that He is punishing you, He may actually be the one showing you the error of your ways to encourage you to change your ways, or to not make the same mistake again. He only wants what is best for you, and He will give you a solution when you least expect it, and from where you least expect it… so keep your faith in Allah, and never doubt His wisdom.

{And whoever fears Allah – He will make for him a way out, and will provide for him from where he does not expect. And whoever relies upon Allah – then He is sufficient for him. Indeed, Allah will accomplish His purpose. Allah has already set for everything a [decreed] extent.} (Quran 65:2-3)

Allah gives a wonderful reminder to us:

I Have Too Many Sins, will Allah Forgive Me?

Of course He will, as long as you are sincere in your repentance and do your best to avoid doing that sin again. Allah tells us:

Allah warns us though, that if we intentionally keep committing the same sins over and over, that it causes our moral sense to disintegrate, and that the sins will put black spots on our hearts, and will eventually consume it, resulting in the hearts becoming sealed, but sincere repentance can erase those black spots.

Warning Against Advertising Your Sins Publicly

How many times do you see people bragging about the sins they commit as if it is something to be proud of?

“All the sins of my followers will be forgiven except those of the Mujahirin (those who commit a sin openly or disclose their sins to the people). An example of such disclosure is that a person commits a sin at night and though Allah screens it from the public, then he comes in the morning, and says, ‘O so-and-so, I did such-and-such (evil) deed yesterday,’ though he spent his night screened by his Lord (none knowing about his sin) and in the morning he removes Allah’s screen from himself.” (Al-Bukhari)

Allah tells us that even committing shirk can be forgiven in Surat al-Furqan in verses 25:68-70, as long as the repentance is sincere and before death approaches. So, avoid advertising your sins, and repent for them to gain the love and mercy of Allah.

Allah Has No Limits 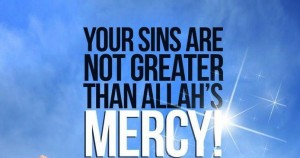 Allah is the Creator of the Earth, the Heavens, and the universe, so of course He is not restricted in anything. He is the knower of all things, seen and unseen. He causes life, and death, and when He decides upon something, all He has to say is “BE!”

So, don’t fall into despair, and don’t lose hope in Allah. Be confident that there is a solution out there for you, you just need to ask! Believing that Allah is not capable of fixing a situation can cause you to fall into disbelief – Be careful!

{And invoke Him in fear and aspiration. Indeed, the mercy of Allah is near to the doers of good.} (Quran 7:56)