The Prophet (peace be upon him) was extremely lenient towards children, forgiving their antics, and overlooking their co-called naughtiness
aaa

It is an era of stringently managed time, back-to-back activities, tight schedules, timed meetings, and the incessant fear of running late. Sadly, the lives of children have also become affected by this fast-paced life.

Whenever I inadvertently show harshness towards my own children, who are also rather spirited, I remind myself that, no matter what the havoc, chaos and chagrin their incessant “naughtiness” wreaks – their bad deeds and sins are not being recorded by the angelic scribes on their left shoulders, until they hit puberty.

On the other hand, as their Allah-appointed parent and guardian, if I am too harsh or strict in reprimanding or punishing them for their mischief, the alert, angelic scribe posited on my left shoulder will promptly and definitely record any injustice that I mete out to them as a sin, especially if I do not repent.

We need to pause and reflect upon the fact that our children are not the ‘evil protagonists’ in the bigger picture of modern-day living, i.e. they are not out to spoil and disrupt our adult lives and our well-organized, businesslike activities, because of which we have decided to ‘control’ and ‘limit’ their movement by isolating them inside school buildings, play areas, and daycare centers for most part of the week.

We should remember that, at the time of our Prophet Muhammad (peace be upon him), children were not put inside school buildings for most part of the day, 5 days a week.

Rather, children used to live by roaming about unrestricted all day inside homes, neighborhoods, markets, masajid and other places of social gatherings frequented by adults, side by side with their parents, relatives, foster-mothers, and other elders. This way, children learned knowledge, life skills and tricks of every trade from adults firsthand.

And the Prophet (peace be upon him) was extremely tolerant and lenient towards them, forgiving their antics, and overlooking their co-called naughtiness or mischief.

We do not find one Prophetic narration (hadith) in which it is implied that the Prophet and his companions shunned the company of children, or discouraged them from entering upon them.

In fact, one of the first reverts to Islam was the 10-year-old child Ali ibn Abi Talib, a protégé of the Prophet since the advent of Islam. And let us not forget that Aisha bint Abi Bakr was betrothed to the Prophet when she was also a ‘child’, according to modern standards.

In fact, she was a widow by the time she hit eighteen, an age in which “children” of modern-day parents are only beginning to ‘fly from the nest’ and leave behind their coddled, indulgent, and often spoon-fed, over-protected parental upbringing. 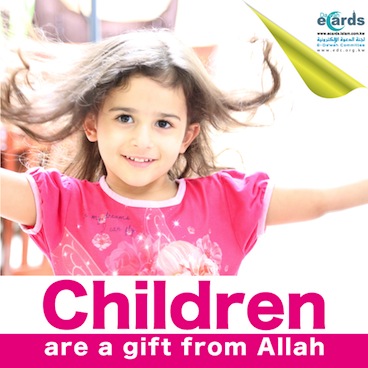 A Question For the Muslim Leaders of Today

Aisha narrated that during the days of Mina, on the day of Eid Al-Adha, two girls were with her, singing and playing on a duff (hand drum). The Prophet was present, listening to them with his head under a shawl. Abu Bakr then entered and scolded the girls. The Prophet, uncovering his face, told him:

“Let them be, Abu Bakr. These are the days of Eid.”  (Al-Bukhari and Muslim)

Let any Muslim man who occupies a position of authority today, look at himself introspectively and check whether minor children, especially delicate-natured little girls – who tend to be more sensitive and shy,- get scared of him or not, when he enters the place where they are playing games or singing poems.

How many imams today shorten the obligatory congregational prayers that they lead in the mosques because the infants who accompany the female attendees are crying?

And how many occasionally lead a congregational or Eid prayer whilst holding an infant or toddler in their arms?

How many keep prostrating on the ground during their prayer, because a small grandchild is sitting, playing, on their head?

It wasn’t just with children, but also with young adults, or anyone else who was younger than him in age, that Prophet Muhammad was mellow in conduct and demeanor.

He refrained from harsh snubs, long monologues of reprimand, giving advice in a monotonic, ‘lecturing’ style to chastise the youth for their misgivings, or tut-tutting them for their misdeeds.

Unlike some elders and figures of authority today, he refrained from speaking for too long, unless he was delivering a sermon to exhort the general congregation towards righteousness.

The majority of hadiths recorded about the Prophet consist of his actions, and the smallest percentage consist of his verbal commands and stern warnings.

Whilst many elders who occupy any kind of small- or large-scale leadership positions, whether in a household, organization, or state, are quick to correct, advise, and reprimand their younger subordinates, often making the mistake of doing so in public, Prophet Muhammad overlooked and ignored many actions or statements of people under his wing. And as the Prophet of Allah, the entire Muslim ummah at that time was under his wing!

Even if today’s authority figures are formal and guarded with strangers, most are still harsh and “uncensored” in front of their own offspring – their adult children and grandchildren.

Most grandparents today think nothing of scolding or telling off their adult son or daughter in front of their other children, the latter’s spouses, as well as their little grandchildren, allowing the latter to keenly observe their parents’ rights being undermined or downright trampled by the family patriarchs and matriarchs.

Imam Ahmad recorded that `Ali ibn Abi Talib said that the Messenger of Allah came to visit him and Fatimah, the daughter of Allah’s Messenger at night, and said:

“Are you not going to pray?”

“O Messenger of Allah, our souls are in the Hand of Allah. If He wills to wake us, He will wake us.”

When I said that, he went away without returning. Then I heard him as he was walking away, slapping his thigh and saying “But, man is ever more quarrelsome than anything (18:54).” (Al-Bukhari and Muslim)

In the above hadith, Allah’s Prophet visited his daughter and son-in-law, and enquired whether they pray qiyam al layl at night or not. Notice the correct priorities the Prophet displayed and instilled as a father and father-in-law: instead of asking about his offspring’s worldly ambitions (e.g., “When is your next job promotion expected? Why not move into a bigger home?”), he asked whether they both got up late at night to pray to Allah or not.

When he got a reply from Ali that was not in the affirmative, he could easily have rebuked him for being neglectful of the beneficial habit of praying qiyam at night, and could have ordered him to pray it, not just as the father of his wife and the grandfather of his children, but more importantly, as the Prophet of Allah. However, he did not say a word, but left, and did not return. Perhaps he did this to silently indicate his displeasure.

He then recited a part of the verse of the Quran that hints at the quarrelsome nature of man, in a voice loud enough for Ali and Fatimah to hear, and slapped his thigh whilst doing so, to send a meaningful and poignant message to his daughter and son-in-law regarding what he thought of their reply.

Note how the nature of the Prophet’s “rebuke” or “reprimand” was subtle, indirect and non-confrontational. It is truly a much more effective approach towards reprimanding adult offspring, than rebuffing them, or resorting to harsh scoldings in front of their spouses; an approach that doesn’t hurt their feelings, or cause them to feel insulted in front of their families (spouse and children).

Is it not amazing how much the Prophet took younger one’s self-respect and feelings into kind regard, despite his lofty status as the messenger of Allah, who was sent as a means of guidance and a mercy for all of mankind!

Isn’t the Prophet’s wise, patient, mellow and easygoing behavior and demeanor towards those younger than him, an eye-opening and thought-provoking example for the leaders and elders of Muslims and non-Muslims today?