Meting out absolute, ‘mathematical’ equality between children is just not possible for a parent, in terms of resources, time, money, and even feelings.
aaa

For most of us, the grass is almost always greener on the other side.

Whenever I come across someone who has just one child, I often hear them wish that they had more. I understand where they are coming from, but I am sure they don’t realize just how they have been spared from one of the toughest trials that Allah puts a parent of more than one child through: that of being absolutely just, fair, and undiscriminating between all their children.

It is not easy, to begin with. And it certainly doesn’t get any easier with time.

Difference between Equality and Justice

Before we begin to discuss how parents can and should be fair and just between their children, we should first try to understand the difference between equality and justice (known as `adl in Arabic). In the modern-day, there is a lot of talk about equality, which is good when understood in its proper context.

We can agree about one thing: that all creation are equal as human beings, and equal before Allah. No one is above the rest. The only inequality in status comes when Allah establishes lines of authority as part of human relationships, such as between a ruler and subject, a husband and wife, a teacher and student. All ethnicities, bloodlines, and races are, nevertheless, considered equal in principle.

Yet, Allah has Himself decreed so much disparity among His creation, as far as habitats, life-cycles, abilities, strengths, talents and weaknesses are concerned. The same applies to the children of the same parents. With time, it becomes outstandingly clear to the parents, that each one of their children is born with his or her own needs, preferences, personalities, and goals in life.

Even though these children shared the same womb, the same sperm, and the same dwelling at the start of their lives, they can be very different from the rest, in many ways. This adds to the challenge of treating all of them “equally”. 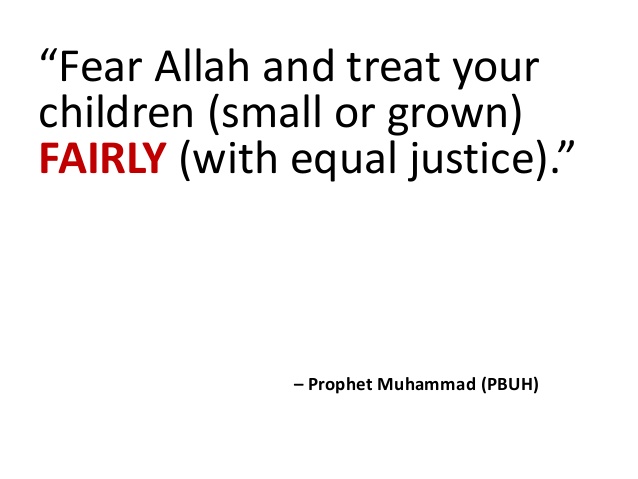 Hence, meting out absolute, ‘mathematical’ equality between children is just not possible for a parent, in terms of resources, time, money, and even feelings. What they have to do, is to be stringent about being fair and just.

It is forbidden for a parent to deliberately favor one child over another in terms of love, treatment, or other resources, for the sake of gaining any perceived personal benefit, or for other reasons. And not only will Allah know when a parent does any deliberate injustice, but He will also take them swiftly to account for it, if they die without repenting for it.

Each parent should remember that!

When children are under the age of 5-10, it is much easier to be just between them. Each little one gets equal amounts of the same thing, or chooses something they like within a budget. For example, they all get to bring a book of their choice, sit on their parent’s lap, and have it read out to them, in turns. Who goes first is balloted. Similarly, they all get to pick one item that they want at the grocery store or toy store, for the same cost. That is it. Everyone’s happy.

Things get more complicated, if not downright difficult, as they grow older and develop their own tastes, preferences, moods, and personality traits. As the mature adult inside them begins to grow and emerge, there are clashes with siblings and parents, which need to be sorted out with immense patience, tact, maturity, and wisdom on the part of the parents.

For example, a son or daughter might get along more easily with a father than with a mother, due to a natural personality clash, or a standoff of (strong) wills. This can create conflicts, especially if another sibling gets along well with the mother due to natural compatibility.

The gender factor also begins to play a greater role in conflicts at home regarding permissions, privileges, and perks. A child’s basic safety & security in some countries is a high-risk factor that varies according to gender after puberty, as is the disparity in the ease with which that child can fall into bad company. The same applies to some roles, errands, and responsibilities. I mean, most of us would unanimously decide whether a daughter or son should be mowing the backyard, right? It is not rocket science.

Similarly, one child’s benign, meek and demure nature can get them more compassion and protectiveness from a parent, whereas another’s strong-willed, confident, and go-getter attitude might make the same parent worry less for him or her. The same disparity in parents’ attitudes can emerge when one child possesses more maturity and responsibility than the others.

Whether it is a simple kiss or hug, or permission to drive the ‘special’ (i.e. more expensive) family car, it really can get extremely challenging for parents to be just between their children when the latter have grown up.

And that’s just for when they haven’t even flown the nest yet!

Conclusion: The Solution is to Fear Allah, Repent & Communicate

As my children grow older, I find myself with my head in my hands more often, as I rack my brain and pray to Allah about how to be 100% just and fair between them, especially when they come to me with yet another complain or demand. I know that, being human, it is just not possible for me to always make the right decision.

However, do you want to know what I do know? I know that Allah knows my intentions, and He knows that I am willing to accept my mistake, admit it, apologize for it, and make amends. I am willing to learn, and undo any damage.

As long as us parents can talk openly to our children about why we made a mistake in judgment, and what we can do to rectify it, there is hope for us all.