HOUSTON – Speakers at the Islamic Circle of North America’s South Central Convention held Nov. 24-26 in Houston, Texas, didn’t mince words when describing the state of Muslims living in America during the presidency of Donald Trump.

In a session entitled “The Trump Trap,” they warned of high racial tensions for Muslims of all colors and creeds and urged unity and compassion as a means of combating rising Islamophobia and intolerance.

“Our future is at stake,” warned Dr. Yasir Qadhi, a professor of religious studies at Rhodes College in Memphis, Tenn.

Qadhi said conditions surrounding American Muslims are worrisome and compared them to what happened to Jews in Nazi Germany leading up to the Holocaust. 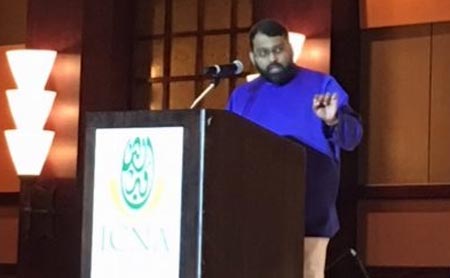 He made the comparison because Muslims make up less than 1 percent of the US population, are subjected to a systematic campaign to dehumanize them, and live in a society which oftentimes presents Muslims as an economic or political threat to America and Americans’ way of life.

Qadhi referenced the Sept. 11, 2001, terrorist attacks as a dividing line in America in terms of how Muslims are perceived.

“Before that, it was like living in a different country,” he said.

Dr. Qadhi is one of the prominent speakers at the Islamic Circle of North America’s South Central 2017 convention “Slaves of Allah, Servants of Humanity.”

To fight against these challenges, Qadhi urged Muslims to educate themselves on Islam and relevant aspects of history so that they might talk to non-Muslims in an intelligent way about what Islam is, particularly as a contrast to what is being presented in some American media, specifically the myth that American Muslims are looking to establish Shari`ah Law.

He also urged compassion, not hate, in dealing with those who might harbor bad feelings toward Muslims, who he argued are being sold Islamaphobia, which he called a money-making “industry.”

“These people have been brainwashed and they’re genuinely worried about their children,” Qadhi said. He advised Muslims to educate themselves and be “wise teachers” to their neighbors and coworkers and anyone else in their personal circle of influence.

Qadhi, who has taught at Rhodes for eight years, said he has experienced firsthand the powerful effect education can have even on those who have never met a Muslim in their lives.

“After taking my class everyone leaves with a positive view of Islam,” he said. 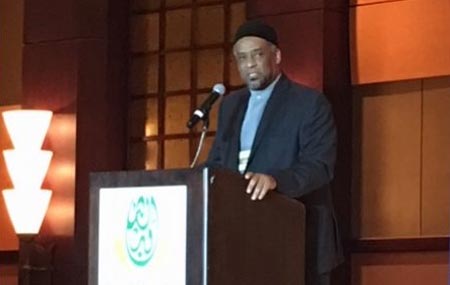 Basheer Wapata, a Native American convert to Islam, and Dr. Musa Dan Fodio, an African-American Muslim, were also among the speakers.

As a Native American, Wapata said he identified with both the religion of American Muslims and the cultural prejudice both groups have faced and continue to grapple with. He urged unity among Muslims of all backgrounds and races to come together to “defend against bullies.”

“What have the Muslims ever done to Native Americans?” Wapata asked. “Nothing.”

Fodio spoke about America’s history of “systematic slavery and oppression” of black people and, like Qadhi, urged Muslims to be well-versed in their country’s history.

He likened what’s going on today, in terms of Islamophobia and a culture of fear toward Muslims, to challenges African Americans have faced throughout the history of the United States.

“The persecution you see today is part of a process to control a people,” Fodio said.

The speakers referenced recent white supremacist rallies in Charlottesville, Virginia, and the recent reinvigoration of the Ku Klux Klan as evidence of a shifting social climate in America today.