DEARBORN, Michigan – About 2000 residents from across Michigan, Ohio, and Canada came together on October 13 in a day-long event organized by the American Midwest Leadership Council (AMLC) in partnership with MY-ICD (Muslim Youth of the Islamic Center of Detroit) as well as several faith centers, civic leaders, and youth organizations.

“We have over 600,000 Muslims in Michigan. We don’t have to go to Texas, or Chicago, or Toronto for a conference. We should be able to create our convention for our own community, and we proved that we could do that,” said Abdallah Sheik, President of AMLC, in a press release.

This year the conference focused on reconnecting Muslim youth, “through positive change.”

Hosting a galaxy of nationally and internationally renowned Muslim speakers, the conference aimed to inspire and mobilize the Detroit Muslim community by addressing pertinent and contemporary topics through lectures, discussions, and interactive workshops. 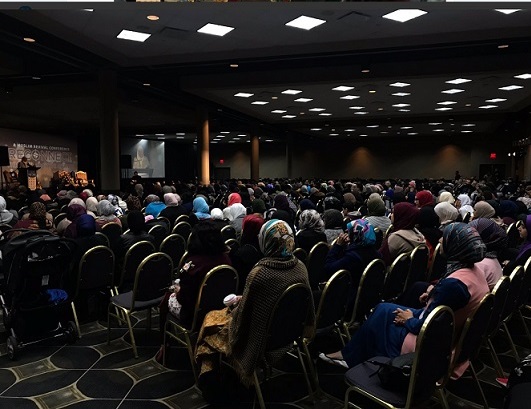 The conference is the first of its kind in the Detroit Metro area, and the collaborative effort took the initiative of bringing many of those speakers, to Detroit, so the community here can benefit from their knowledge and intellect.

The huge number of youth attending the conference was the most remarkable note, as the event organizers said they focused on reaching out to marginalized demographics within the Muslim community, specifically women and youth.

Many of the contemporary subjects discussed were framed by the violent socio-political environment American Muslims must navigate in their daily lives.

At a time where many Americans challenge or even oppose the existence of Muslims in this country, uncertainty and doubt run high amongst many Muslims. Speakers such as former gubernatorial candidate, Abdul El-Sayed helped shed light on some of those misgivings and offered solutions,

“Youth from Michigan & Ohio came together to organize a conference that addresses relationships that are most important to us faith, family and community,” said Khaled Saleh, director of Muslim Youth of ICD and head of the Reconnect Conference Committee.

“The feedback from our community was a clear sign the purpose of the conference was attained. We are looking forward to Reconnect 2019,” he added.

“We shouldn’t be living our lives revolving around anyone and anything but Allah (SWT).” @YasminMogahed #Reconnect pic.twitter.com/lLzkadbb7U

Do NOT miss the rest of this conference! Still some tickets left onsite!#Reconnect pic.twitter.com/5AA7dX5iEe

“How close to Allah do you want to be? Worship Him as though you see Him. Strive. Struggle. Worship.” @SirajWahhaj #Reconnect pic.twitter.com/8ZXzg3rq0K

“Stop sinning before your heart stops beating. If you do not feel remorse when you sin, then wake up.” -Imam Suleiman Hani #Reconnect pic.twitter.com/39ayZrioeo