NEW YORK – For many Muslim women living in the United States, wearing hijab comes with many challenges. The social vulnerability to discrimination and hate adversely affects numerous women donning the head covering.

Muslim women in hijab frequently encounter discrimination in the workplace. According to the ACLU Discrimination Against Muslim Women Fact Sheet:

“Muslim women have been prohibited from wearing their head coverings in a number of contexts. They have been harassed, fired from jobs, denied access to public places, and otherwise discriminated against because they wear hijab. Because of their visibility, Muslim women who wear hijab face particular exposure to discrimination and have increasingly been targets for harassment in the aftermath of September 11.”

Young Muslim women and girls are also exposed to discrimination in schools, with instances of teachers removing their hijabs, causing trauma.

In an attempt to empower women and girls, author, speaker and coach Halimah DeOliveira created the Not Without My Hijab project, which involves workshops and a play promoting confidence and positive self-esteem for Muslim women.

The Play’s the Thing

The play is currently on national tour, with the most recent staging at the Cramton Auditorium in Washington D.C.

Not Without My Hijab features Aneesah, a Muslim girl in a public school who struggles with bullying, acceptance, and self-confidence. She ultimately has to decide how important wearing hijab is to her, something numerous Muslim girls must think about as they navigate through American society.

DeOliveira explained what prompted the development of the workshops and play.

“The motivation behind creating the play stems from the overall purpose of the Not Without My Hijab platform which is to empower women and girls to embrace their religious identity in the current sociopolitical climate where a person’s outward expression of their religion is in most cases not tolerated.

As I traveled the US in 2016 speaking about girls and women’s empowerment, I noticed many were denouncing or diminishing their faith or beliefs to be successful in business or accepted in their communities.”

The workshops and play host both Muslims and non-Muslims. “30% -40% of our audience both at our workshops and at the play are Non-Muslims,” said DeOliveira. “The feedback from non-Muslims has been positive.

Local Muslim communities also welcome the play. “The support from the Muslim community has been steadily increasing with the popularity of the play,” DeOliveira told About Islam. 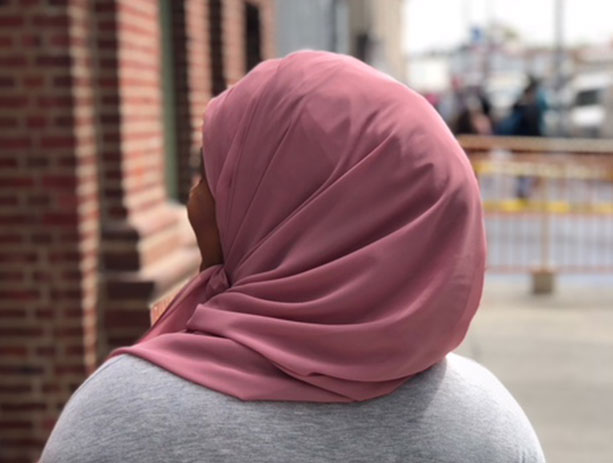 Fighting Stigmas and Being Unapologetic

The journey that Aneesah takes to embracing her religious identity reflects a lot of young Muslim lives. Much of American climate is hostile towards perceived and obvious Muslims.

“In a charged Islamophobic environment, the Muslim identity and, dare I say, more so the hijabi or covered Muslim identity is highly stigmatized,” said DeOliveira. “Covered Muslim women bear the burden of the entire religion on their heads because they choose to outwardly express their religion.

DeOliveira expressed the need for more awareness about and appreciation for the practice of covering in which Muslim women engage. “With an increase in the number of hijabis entering the workforce, the need to educate, embrace and empower them is becoming greater.”

DeOliveira offered advice to Muslim women interested in creating their own projects. “I would advise any aspiring Muslimah playwright to write about a topic she is highly passionate about.

The work behind putting on a play production begins after the play is written. I would ensure she has a team behind her with members just as passionate as she about bringing the production to fruition. I would raise the capital via grants etc. prior to starting the project.

You’ll want to quit every single day so be sure your “why” is solid. Have the best accountability partners and cheerleaders in your corner.  Also, surround yourself with people who are honest and tell you when your ideas stink. No one likes a “yes” man or woman.

Don’t waiver on your vision and be prepared to work your butt off.”

DeOliveira and her team continue to tour Not Without My Hijab across the nation.