Sameeha Ahmad (Right) with her friends at the University of Maryland(Photo: Waseem Abbasi/USA TODAY
aaa

WASHINGTON — In a time of increasing hate crimes and Islamophobia, Muslim women’s hijab is becoming a symbol of resistance and feminism, with women of different faiths donning it to express solidarity with Muslim women.

“The way you look at it from a religious perspective, it empowers you by strengthening your relationship with God. It’s a step you are taking to further yourself within your own religion.

“No one forced me to dress this way,” she added.

Since the election of President Donald Trump, the debate around hijab has evolved, after the outfit became a symbol of resistance to Islamophobia accompanying policies targeting Muslim immigrants.

Scores of non-Muslims have donned hijabs to express solidarity with Muslim women, overcoming an old misconception that hijab oppresses women.

“The ‘hijab oppresses women’ narrative is not only racist, it is also sexist,” Dalia Mogahed, director of research at the Institute for Social Policy and Understanding, a non-profit organization working to empower American Muslims, said.

To assume a woman’s hijab was forced without asking her is to presume she views Western styles as ideal, Mogahed said.

Citing Gallup surveys of 90% of the global Muslim population, Mogahed said that “hijab is a choice by the vast majority of women who wear it, especially in the US where there is great societal pressure to not wear it, rather than the reverse.”

“Oppression means the taking away of someone’s power, their agency. Yet a woman in a hijab is only covering her body and hair, not her voice or intellect,” said Mogahed, who wears a hijab.

“And a man dressed in a full robe and head cover, like many do in the Middle East, is not said to be oppressed. To say that hijab oppresses women is to say that the source of a woman’s power, but not a man’s, is her body, not her mind.” 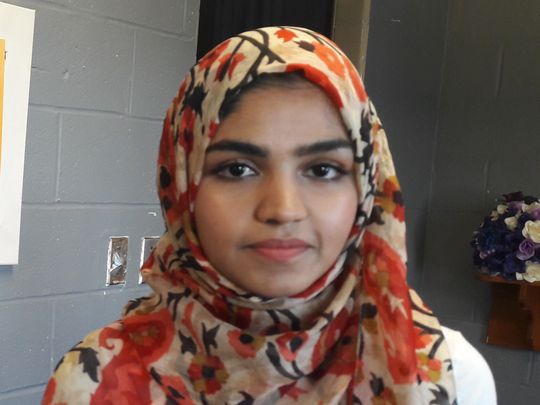 For Anam Khatib, a neurology major at the University of Maryland, donning a hijab is the most feminist statement that a woman can make in a society where consumerism and capitalism constantly tell women “what to wear and how to look like and what body we should have.”

In Islam, hijab is not “compulsion,” she said. “If it’s compulsion it’s not Islam. It’s completely my choice and no one has ever forced me.”

“By covering my body, I am able to limit how much someone can objectify me and instead have the power to only be judged for my intellect, abilities and personality rather than simply my appearance,” she said.

When Nike introduced the Pro Hijab earlier this month, Zahra Lari, the United Arab Emirates’ first international figure skater, shared an Instagram post of herself wearing one with the hashtag #girlpower.

She and her fellow athletes are “confident women,” she told Vogue Arabia.