The mosque was first opened in 1986 when Las Vegas was no longer known for its entertainment business.

Trying to change the status quo in the area, the mosque started purchasing some of the surrounding property and rent it out to families in need, creating the “Muslim Village.”

“One of the challenges we faced is that as long as we, other’s owned it, they could rent to whomever they wanted and it would take time to move them if they happen to be drug dealers or drug users or gang members,” Seifullah said.

“This four-plex, the white and green one, we own. It was the first one,” he said.

Despite its name, the property is not limited to Muslim residents only.

“So, we have seniors and college students and primarily women that live in this area,” Seifullah said. 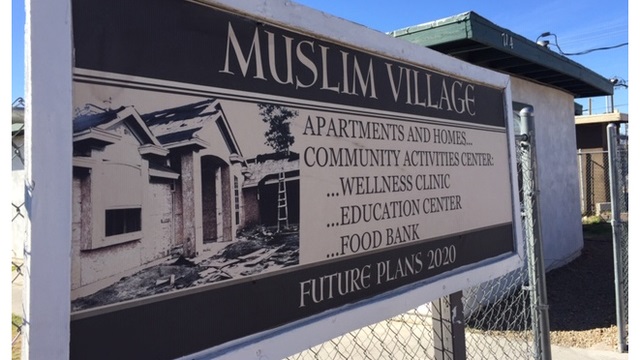 “I live directly behind this in the green and white building,” said Ahmad Ade, Muslim Village resident.

“Not necessarily the physical part of it, the property, but because of the neighborhood and relationships.”

The mosque has renovated a second four-plex in the area although they don’t own it yet.

Along with buying properties, the mosque plan to build three townhomes.

The city of Las Vegas has designated the area around the mosque a “crime and drug” free zone.

“The reward is in knowing we provided some services,” Seifullah said.

Islamberg is another Muslim community in rural New York, which was set up by the Pakistani Sufi cleric Mubarak Ali Gilani in the 1980s. Today, it has about 200 residents.

The community was meant to be a commune comprised of mostly African-American Muslims escaping inner New York City’s violence.