CHICAGO – As imams take the lead in voters’ registration across the US, a surge of anti-Islam rhetoric in this year’s election cycle has fueled additional efforts by American mosques to boost voter turnout and encourage Muslims to perform their civic duty.

“Every vote counts,” Imam Nazim Mangera, who occasionally incorporates “get out the vote” messages into his Friday sermons at Chicago’s Muslim Community Center, Chicago Tribune reported on Tuesday, August 30.

“When we take part in the political process, politicians, even if they don’t benefit us, at least at a minimum, won’t harm us.”

Though Mangera can’t vote himself, as a Canadian, he is doing everything he can to make sure Muslim voices are heard.

In addition to community leaders setting up voter registration tables in lobbies and booking buses to take people to the polls, imams in their weekly sermons are urging congregants to cast their ballots.

“They see the danger is in front of their own houses,” Mangera said.

“It’s unfortunate that we have these negative aspects in life to encourage people (to vote).”

According to the Institute for Social Policy and Understanding, a think tank that focuses on the American Muslim community, the number of Muslims registered to vote lags behind other faith traditions as well as the general population.

Only 60 percent of American Muslims are registered to vote, compared with at least 86 percent of Jews, 95 percent of Catholics and 94 percent of Protestants, a recent study showed.

Fourteen percent of Muslims who are eligible to vote for the next president say they won’t; the largest of any faith group.

For Dr. Zaher Sahloul, a longtime Muslim leader who came to Chicago from Syria nearly 30 years ago, it is hard to convince immigrants or first-generation Americans that their votes matter in a national election.

“Don’t forget many Muslim immigrants come from countries that have dictatorships — whether Pakistan, Egypt or Syria — and in these countries participating in civic life is not something everyone does.” 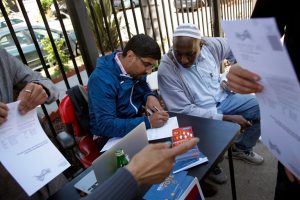 “If you are a good Muslim, you should participate in civic life,” he said.

He cited a recent sermon in which he shared a story from the Qur’an about how the Prophet Joseph sought a position safeguarding the nation’s treasury to protect it from abuse.

“I don’t know any scholar in any major Western country that discourages voting,” Mangera said.

Scholars in non-Western countries may “say positive things about the dictator or king because if they push for democracy in those countries they might be harmed in one way or another,” he added.

In fact, it was imams who were embracing the voting initiative, said Akhter Sadiq, 65, of Morton Grove, coordinator of interfaith outreach at the Muslim Community Center.

So far, mosque volunteers have registered nearly 100 members to vote in the fall election at tables set up after Friday prayers and during family festivals.

“The mosque is the center for just about anything,” said Sadiq, who oversaw a registration booth during a food and fun fair at the Muslim Education Center in Morton Grove on Sunday.