HAVANA – A small, but steadily growing Muslim community in Cuba is marking the end of the holy fasting month of Ramadan quietly in their small prayer hall, awaiting the construction of their promised mosque in Havana.

“Tourists often come through this street and they are so surprised when they realize they are looking at a mosque,” Ahmad Aguelo, who reverted to Islam 17 years ago and runs the prayer hall where some 200 worshippers gather for Friday prayers, told Agence France Presse (AFP) on Sunday, July 3.

“I am not officially an imam, as there is no training course here,” he said. “But I know the basics.”

There are as many as 10,000 Muslims in Cuba, making up less than 0.1 per cent of the island nation’s population.

According to experts, Islam was introduced to Cuba by Muslim students who came from countries such as Pakistan in the 1970s and 80s.

A few hundred meters away, a sign advertises the construction of a purpose-built mosque on a two-hectare piece of land. Turkish President Recep Tayyip Erdogan promised it to Cuba in February 2015.

In June 2015, the Cuban government gave the go-ahead for the inauguration of the prayer hall in the heart of Old Havana as “Cuba’s first mosque.”

“We write ‘mosque’ at the entrance because it works like one,” said Rigoberto Menendez, director of Arab House, which is behind the mosque project.

“A real mosque would have more space”, but “the main thing is for Muslims to be able to come together in one place.”

Cuba’s Muslims have been clamoring for their own house of worship for 25 years.

“We would meet in apartments around the city,” said Pedro Lazo Torres, who converted in 1988 and is considered Cuba’s first Muslim.

“I can practice my religion totally freely in Cuba.” 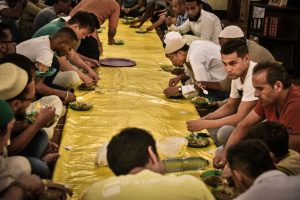 With almost no shops selling Islamic clothes or food, it can be difficult being an observant Muslim in Cuba during Ramadan.

Tradition holds that Muslims break their obligatory fast by eating dates, but in Cuba there aren’t any.

“Everything is imported. The Saudi embassy supplies us with dates, traditional garments, ‘halal’ meat. With the help of God, we get by,” said Lazo Torres, who goes by the name Yahya.

Yaquelin Diaz, who goes by the Islamic name Aisha, lived in Spain for eight years and it was there that she converted, thanks to a Pakistani brother-in-law.

“Because of our habits lots of people think we are foreigners. They cannot imagine that there are Muslims in their country. But Islam is expanding in Cuba.”

Aisha said the only thing missing in Cuba is a shop that sells religious garments.

“Our brothers from Saudi Arabia give them to us, but we cannot keep living off their charity. We need our own stores, in our own style. We must be able to promote Islam in Cuba.”

After the Cuban Revolution of 1959, Cuba became an officially atheist state and limited practice of all religions. But over time the restrictions eased.

Cuba became a secular state with a constitutional reform carried out in 1992, Menendez said.

“Everything can evolve over the course of a country’s history. Look, the United States killed thousands of blacks in the last century. And now it has a black president,” Ahmad, the imam, added.

As the time approaches to break the day’s fast, the prayer hall fills.

The man who distributes food is named Leonel Diaz, but he goes by Mohammad. He reverted to Islam at age 73.

“It is never too late to welcome a good thing,” he said.