MAKKAH – The residents of different districts in the holy city of Makkah compete daily to serve the pilgrims during Ramadan with water, yogurt, coffee, food, and guiding which they consider as their own duties.

“The old neighborhoods that surrounded the Makkan sanctuary contribute to the culture of sharing and cooperating and laid friendliness in a small geographical area, linking districts and population centers of different ethnicities and spectrums,” Fahad Al-Harbi, a neighborhood Mayor, told Arab News on May 28,

The houses in Makkah during the holy month were painted on the inside and outside, welcoming the Hijri month of fasting and its Umrah visitors.

Makkah is famous for being a vibrant city throughout the year. Its long Umrah season, followed by the Hajj season, makes it a rich place visited by all nationalities from around the world.

The holy city of Makkah conforms to its culture, identity, and profound heritage, especially during Ramadan. 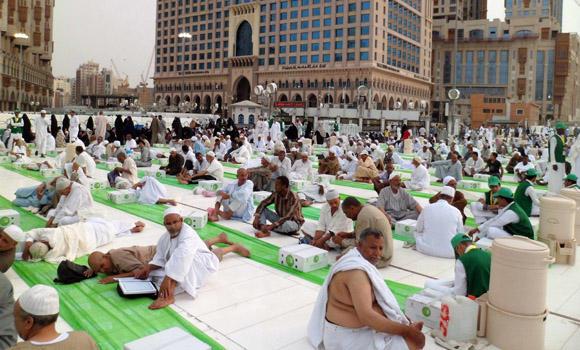 The Hijzai Adnanite city is wonderfully diverse with its citizens who hail from various Muslim nations, all were brought together by their love for Makkah, which they have chosen as a residence.

This diversity has characterized Makkah’s Hijzai Adnanite identity and satisfied its Arabized Semitic customs and social patterns, making it unique and different from Arab Qahtani cities in Saudi Arabia.

“Makkah witnesses an increased activity during Ramadan, one of the great occasions that reflect the cultures of this city’s citizens and how they create their own happiness,” Al-Harbi said.

“The making of ful, Sobia, Hijzai sweets and restaurants increases and their owners are friendly with people. All owners of specific food sell their products with pleasure and ease. They sing beautiful tunes they inherited while selling balilah,” the mayor continued.

Districts in Makkah get crowded with competing sports events like football and volleyball. Tournaments are held where the neighborhoods’ mayors give away trophies in the final games.

Makkah is located at the western part of the Arabian Peninsula which faces the Red Sea at a height of 277 m above sea level. Its resident population in 2012 was roughly 2 million, although visitors more than triple this number every year during the Ḥajj which occurs in the 12th Hijri month of Dhul-Ḥijjah.

According to 2005 records, more than 15 million Muslims visit Makkah annually, as a result, Makkah is one of the most cosmopolitan cities in the Islamic World.

The holiest city in Islam is the birthplace of Prophet Muhammad (PBUH), and the site of the Holy Qur’an revelation. Makkah is also the home to the Kaaba; the holiest site in Islam and the direction of Muslim prayers.