LINCOLN – Though as a British army veteran, he has a Union flag and the cross of St George flags hoisted in his front garden, Ian Durrant is not an anti-Muslim nationalist.

The former soldier, who served for 25 years in the army, is actually a pro-mosque activist who campaigned for the first mosque in Lincoln city in English East Midlands, The BBC reported on Monday, April 23.

Ian says the flags are there “because I’m a veteran and I’m proud to be English”. But he admits the flags sometimes give off the wrong impression.

“Someone came to talk to me, and he said, ‘Congratulations on flying the flag, what are you going to do about those bloody Muslims?’ I said, ‘Are you National Front?’ ‘Yes I am, brother,’ he said. So I advised him – using army language – to get out of my garden.”

Ian was not always a pro-mosque person. He actually was one of the most staunch opponents who formed a group to protest the mosque’s construction.

“There was no parking, there would have been nearly 90 cars, and the building only provided 12 parking spaces,” he said, adding that his reservations were related to traffic.

Things got worse when the site, where the mosque was planned to be built, burned down in unexplained circumstances. Three protests were also organized by groups including the English Defence League (EDL) and East Anglian Patriots marched through the city center.

“We had a letter campaign in the press against the EDL, asking people, ‘If you see them, turn your back on them and walk away.’ And they did,” he recalled. 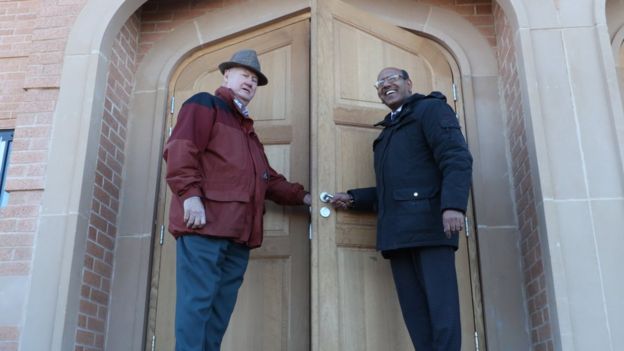 Things changed when the Muslim community decided to reach out to the community and address their fears with open doors and hearts.

“A lot of people welcomed us – but a few people were not happy. We were giving them leaflets, and they were throwing them straightaway into the bin,” Tanweer Ahmed, chairman of the Lincoln Islamic Association, said.

Knocking every door in the area, he said that even Muslims were afraid of his move.

“My wife was saying, ‘Why are you doing that?’, and my children were worried that someone could harm me. Some of my colleagues were also worried about safety. And there were some that just didn’t want to do it,” he said.

Tanweer also reached out to Ian, who knew nothing about Islam.

“I knew nothing about Islam, and someone sent me an email saying, ‘We’re running a series of talks – would you like to come?’ So I did. I sat in the front on my own and it was fascinating,” Ian said. 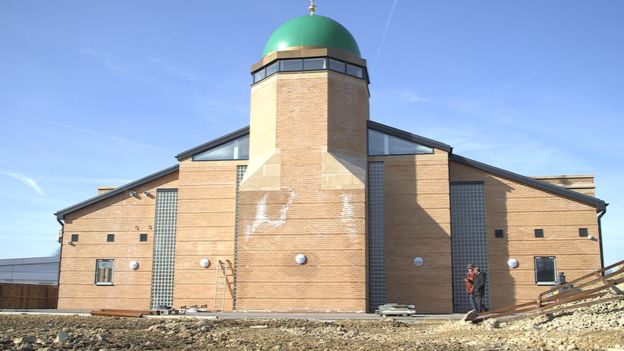 The new mosque can hold more than 500 worshippers

He’s attended so many events, including `Eid celebrations and mosque open days, that many worshippers recognize him on the street. But he’s raised eyebrows within his own community.

“I took pride in being friends with, and talking to, Muslim people. Other people would say, ‘Why the hell are you doing that?’ And I said, ‘They’re people,'” he said.

“If I look out of the window to the left, I can see the cathedral in its glory,” says Ian, as he draws a net curtain. “If I look right I see the mosque. East has met West in Lincoln.”

Ian is excited about the mosque’s opening ceremony and hopes to bring his friends along.

“My guys – apart from one – don’t mention Muslims anymore to me. I’d like to think they’re accepting my way of thinking. I don’t like prejudice,” he said.