PAISLEY – A Muslim shopkeeper from Paisley, Scotland has set up a charity fridge to offer free food to the needy, hoping the practice could assist food banks struggling with increasing demand.

“People in the community, no matter who they are, if they find themselves struggling, are able to take advantage of this fridge,” Rekz Afzal told the BBC.

“It will get them by until they are feeling more secure,” he added.

According to estimates released by the Trussell Trust, which runs 52 food banks in Scotland, demand for emergency parcels rose 20 percent in the first half of this year.

Rekz thinks community fridges could “take a lot of pressure off the food banks” or even shut them down. 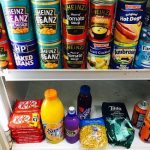 “People feel more comfortable about going to their local shop than a food bank. They might not want to make their situation known,” he says.

One of the main problems, Rezk mentioned, are the access hours of food banks. In Paisley, the food bank is only open three days a week.

Rezk says his vision is to “close the food banks, full stop. If food banks are only open for limited hours it’s not serving their purpose properly.”

Ramadan Charity Fridges Back in Dubai