DUBAI – Feeling for the poor during the holy month of Ramadan, residents of Dubai have set up a new project to share fridges across the city, stocking them with food and beverages that workers observing Ramadan can use to break their fast.

“Seeing people work hard in the heat outside, some of them while fasting, made me want to do something — no matter how small,” Sumayyah Sayed, a 29-year-old Australian woman living in Dubai, told HuffPost Arabi.

Sayed launched the project in early June as Muslims across the world started fasting the holy month of Ramadan.

The project expanded to spread in around 50 locations around the city, where people can drop off food for the needy.

Moreover, the idea spread across other emirates, including Sharjah and Abu Dhabi, reaching around 70 fridges around the United Arab Emirates.

According to Sayed, the fridges seek to serve gardeners, security guards and construction workers, many of whom work outdoors in temperatures exceeding 100 degrees Fahrenheit.

There are approximately 5 million low-paid migrant workers in the UAE, most of whom are South Asian, live in appalling conditions, and are subjected to rights violations.

“Everyone who works in our communities is welcome to it,” she said.

Ramadan is the holiest month in Islamic calendar. 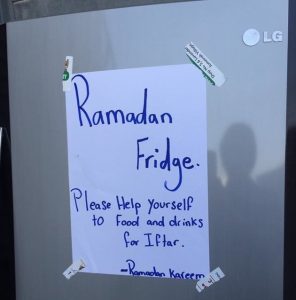 Sayed said the idea was inspired by Fikra Yel, another Dubai resident who has had a fridge set up outside her house for about three years.

She started a Sharing Fridges Facebook page to mobilize people around project, attracting nearly 15,000 members as of Thursday afternoon.

According to the project’s Facebook page, the most popular items donated have been fruits, vegetables, milk products and drinks.

“When the workers arrive at the fridge and they take what they like, the smile on their faces feels like a million dollars,” she said.

The community has responded enthusiastically to the initiative, Sayed said.

“The group has been amazing in that they’ll pinpoint an area and chip in to buy a fridge and set it up,” she said.

“It’s a very cohesive community spirit, and that’s what Ramadan is all about.”

Ahmed Abulhassan, a 27-year-old Egyptian man living in Dubai, told The WorldPost that he drove to one of the fridges and found it “beautifully stocked today with fruit yogurts, milk bottles, individually portioned fruit and vegetable packets and cold water.”

“I think it’s a really good-hearted and necessary initiative. And it comes from the unfortunate fact that people overproduce and overpurchase food during Ramadan,” Abulhassan said.

“But in reality, what they should do is keep this running all year.”