BERLIN – The Islamic Community Milli Görüs (ICMG) conference hall is full to capacity with some 3,000 Muslim women making the takbeer ‘Allahu Akbar.’ The intense ‘just-so’ perfection of the stage management is reminiscent of a Blairite shindig back in the day. Marching music underpinned by imperious humming, similar to Vangelis’ ‘Conquest of Paradise’ has a rising throb which makes you want to pluck the ICMG flag from your goody bag and give it a gusty wave.

This is how the Turkish expat community celebrates their considerable ability to build a grassroots Islamic movement: loudly and with confidence.

I am attending the 25th anniversary of the foundation of the Islamic Community of Milli Gurus (ICMG), women’s sector, based in Germany, arguably, the most influential Turkish Diaspora movement, worldwide.

Since the organizations first branch opened in Germany in the 1970s, it has flourished and now boasts over 87,000 subscription-paying members in Europe alone. That generates an annual income running into millions of euros.

And the success doesn’t end there. The religious movement runs 514 mosques and cultural centers in eleven European countries, all of whom sent female delegates to attend the conference. 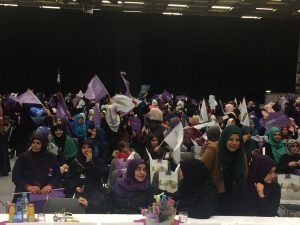 As increasingly hardline right wing rhetoric gains traction in parliaments in the West, Muslims are divided on how to move forward as minority communities. Being quiet and invisible is an option preferred by some, whilst assimilation is demanded by parties such as Marine Le Penn’s Front Nationale, in France.

Chairman of ICMG, Kemal Ergun, makes the pragmatic call to adapt not merely to survive, but to build for the future. He explained the ICMG approach to AboutIslam.net: “If a Muslim lives in Helsinki or any other European City he should not be living with the longing to go to Turkey or Pakistan. He should aim to protect his values in the country he lives without losing them.”

The organization’s mosque building program has been prodigious. In Germany alone, an estimated 300,000 Muslims will attend Friday prayers and khutbah (lectures) in a mosque affiliated to ICMG each week. 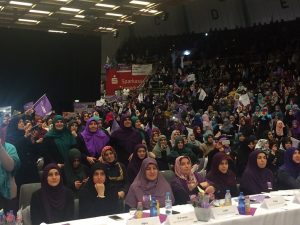 The confusion of identity apparent in many sectors of Muslim society in Europe is addressed in a no nonsense way by the movement’s leadership.

“As Muslims living in (for example) Berlin, we should add to Berlin’s cleanliness, the practical responsibilities of being a citizen must be fulfilled,” Kemal Ergun explained.

“Living within the legal framework we must build institutions, mosques, schools, women’s institutions, and spaces for all members of society including non-Muslims. We must not have a ghettoized way of thinking.”

ICMG has a tried and tested formula for growth and success which should interest the many other Muslim organizations with shrinking youth involvement and poor financial management.

Milli Gorus has a practical approach to maintaining youth interest.

“We keep everyone so busy they are never bored and have no time to leave,” laughs the President of the Women’s Section, Hatice Sahnin. She isn’t joking.

Toddlers attend ICMG Kindergarten from 3-6 years old. They then progress to primary level establishments and even if in the educational mainstream they have the option of a weekend school. 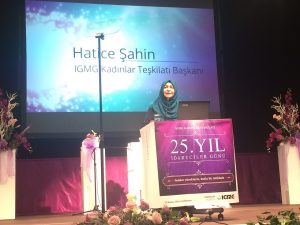 Some 51,000 students attend these establishments. From 14 years onwards the girls and boys are separated into their own organizations and empowered to contribute to the constant cycle of events which need organizing.

At this point there is a dropping off of membership of 50 per cent. This is seen as dire. Yet, for other Muslim communities in the West, maintaining the interest of half the youth in faith-based activities would be hailed a great success. ICMG aims high in all things.

“Our structure is well established. We work uniquely for Allah, that is the first pillar. And through this we must help the people. Three words govern our actions: sincerity, perseverance and steadfastness,” Hatice Sahnin explained.

ICMG keeps the work flowing. It members look forward to each new task and event as something dynamic and with purpose. Study of Quran takes place from childhood well into university and is encouraged into parenthood.

Classes and mothers groups abound for this purpose. At this point, all adult members are expected to contribute time and finances to building and maintaining ICMG structure and institutions.

All of which can seem a bit cult-like. So, are its members cut then off from mainstream society? Hatice Sahnin says this is not the case:

“We are here to work for the good of the country where we live. I live in Germany I have a duty to Germany. I am European and citizen of the world. Our duty is for the good of humanity. We must dialogue and we must contribute.” 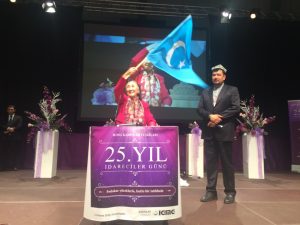 Back in the hall, thousands of women are silenced by the speech of the main guest. Rabiya Kadeer, has dedicated 50 years of her life to the Uyghurs’ cause. At 70 she is tiny yet robust, with striking grey plaits ending near her waist.

In the 90s, Kadeer, was the seventh richest person in China. Her wealth was taken by the state and she was put into jail for six years. Since being released in 2005 on medical grounds she has campaigned against the increasing destruction of her people.

The Chinese regime enforces policies that aim to systematically eradicate Uyghur culture and its Muslim heritage.

The flags droop. The hall is silent. Tears are shed. 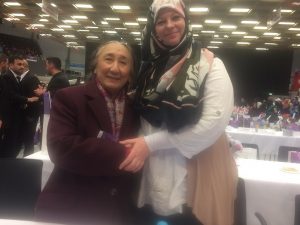 But like her hosts at ICMG, Rabiya Kadeer is not one to focus on losses. She raises the flag of Uyghurs to immense cheers.

The music picks up again, a triumphant atmosphere returns. They have much to be pleased about.  ICMG is successfully adapting itself, from an inward looking organization to an outward reaching movement.

Here in Germany, at least there are a section of Muslims united and making steady plans for the challenges ahead.