Ronaldo told Syrian children that amidst a war entering its sixth year they are the “true heroes.”
aaa

MADRID – Cristiano Ronaldo, 2016’s best football player, offered the children of Syria a message of hope on Friday, December 23, telling them that they are the true heroes in the sixth year of a bitter war, and making a generous donation to provide immediate life-saving relief to children and families in Syria.

”This is for the children of Syria. We know that you have been suffering a lot. I am a very famous player – but you are the true heroes. Don’t lose your hope. The world is with you. We care about you. I am with you,” said Ronaldo in the message shared on social media.

Ronaldo, a Save the Children Global Artist Ambassador since 2013, told them that amidst a war entering its sixth year they are the “true heroes.”

“With our partners in Syria, we have been helping children in Aleppo and are supporting the thousands of families who have now fled their homes,” said Nick Finney, Save the Children’s North-West Syria Country Director.

“Our partners are distributing food baskets and emergency supplies, and are providing medical assistance in the areas where people leaving Aleppo are arriving to, often with nothing but the clothes on their backs. And we run dozens of health centers and schools in the region. After some of the most intense violence and brutal siege we have seen in Syria’s conflict, families urgently need our help. 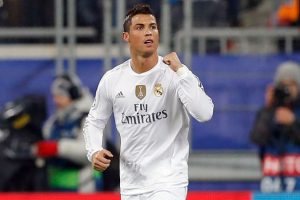 Ronaldo told Syrian children that amidst a war entering its sixth year they are the “true heroes.”

The donation will help Save the Children provide much-needed food, clothing, emergency medical care and psychosocial support to vulnerable children and families who have been living for years under siege and under constant bombardment.

“Cristiano Ronaldo’s generous donation will help us to support children from Aleppo and across Syria, who have suffered things children should never have to live through,” Finney said.

“We are tremendously grateful for his life-changing support. Ronaldo is not only one of the world’s most iconic sports figures, but he also has become a beacon of hope for millions of boys and girls worldwide – and hope is something that Syria’s children need now more than ever,” he added.