THE HAGUE – In a key defeat to the wave of populism, anti-Islam, far-right Party for Freedom (PVV) was easily defeated in Netherlands, as exit polls suggested Prime Minister Mark Rutte’s liberal party has won the Dutch elections.

“This is a night for the Netherlands,” Rutte told crowds of supporters after the exit polls were released, CNN reported on Wednesday, March 15.

“After Brexit, after the US election, we said ‘stop it, stop it’ to the wrong kind of populism.”

Exit polls showed Rutte’s VVD party gaining 31 of the 150 seats in the lower house of parliament, compared to 19 seats for 3 other parties, including Geert Wilders’ PVV.

The result is far poorer than expected for Wilders, who had promised to “de-Islamize” the Netherlands.

The left-wing environmentalist GroenLinks (Green Left) party also appears likely to make big gains, while the PVDA (Labour) party, Rutte’s outgoing partners in a coalition, were on course for a historic defeat.

“Social democracy will come back. We will start building today.”

Turnout was 81 per cent, a NOS exit poll said, the highest for three decades.

Wilders tweeted: “PVV voters thanks. We won seats, first victory is in. Rutte hasn’t got rid of me yet.” 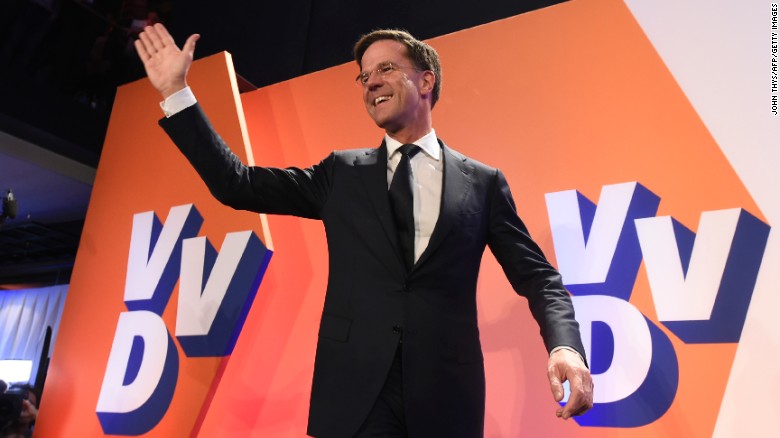 The vote was the first of three elections this year in Europe in which populist, right-wing candidates were hoping for mainstream electoral breakthroughs.

In April’s French presidential election, National Front leader Marine le Pen is expected to make it to the runoff vote.

In German elections in September the euroskeptic, anti-immigrant Alternative für Deutschland party is expected to win its first seats in the federal parliament.

The Dutch result has been met with a mainstream relief from European neighboring governments.

Italian Foreign Minister Paolo Gentilioni tweeted his approval: “The anti-EU right has lost the election in the Netherlands. All together for change and revive the (European) Union.”

“Congratulations to the Dutch for preventing the rise of the far right,” French Foreign Minister Jean-Marc Ayrault said on Twitter.