MANCHESTER – Christina Longden is a descendant of a 19th-century tea merchant and Alderman Robert Stanley.

Stanley’s successful projects in the 1870s are well documented, as he played a key role in the building of the market hall and the establishment of local parks in Stalybridge, near Manchester, during two tenures as mayor.

What was unknown, until recently, is that in 1888 Robert Stanley became Brother Robert ‘Reschid’.

As Vice-Chair of the UK’s first mosque, Reschid Stanley contributed to the housing and education of poor children and orphans. He remained loyal to his family and friends in Stalybridge. However, after his death in 1911, the facts of his conversion were covered up.

Fast forward a hundred years and a member of Reschid Stanley’s family also turned to Islam oblivious to the religious connection.

As part of an ongoing series into the contributions to society made by Muslims of western heritage, Lauren Booth speaks to Christina Longden about Reschid Stanley and his hidden faith.

AI: Tell us about your famous ancestor 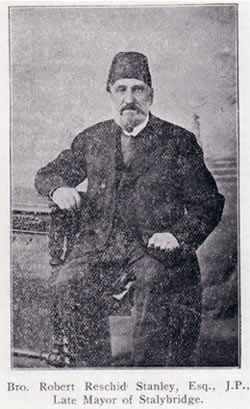 CL: Robert ‘Reschid’ Stanley is my Gx3 grandfather. He was one of the first converts to Islam of the Victorian era. He was friends with Shaykh Abdullah Quilliam. He did an awful lot to help the local community, getting the reservoirs going, parks that sort of thing. But when he became Muslim he threw himself into the community through the Liverpool mosque. He relocated to Manchester and was a prominent member of trying to get more people to come to Islam. He had a pretty phenomenal life.

AI: It was your father, Brian and his determined research which has uncovered so much history. What piqued his curiosity?

CL: Somebody from the council gave my dad a fez and a little tiny pin with rubies set in it in the shape of a crescent and a star. They were presented in a box. And we thought: ’what on earth are these about?’ Plus, we were given a couple of crumbling magazines called ‘The Crescent’ which featured an interview with Robert Reschid Stanley. At the time we knew nothing about the Liverpool mosque, the magazine, or Muslims in England. That began our journey of trying to find out more about Victorian Islam.

AI: How did your family react to the previously hidden Muslim connection?

CL: Previous generations had basically covered it up, kept it quiet, didn’t want the fact he had become a Muslim talked about. For us, as a family, the discovery was minor compared to finding out my brother had accepted Islam! That was the big ‘shocker’ and we had already gotten over that! My mum and I were practicing Christians and went to church. My brother had always been very serious in matters of faith. For some outside the family, his conversion was seen as a betrayal, I guess. Perhaps there was an idea that he’d turned his back on everything he’d been taught growing up. But had he? In fact, he had chosen fantastic guiding principles in life and still to this day is a devout Muslim. In a way, my brother had given the key, for his great great great grandfathers life to be returned to again.

AI: Tell us about the commemorative celebration you are planning. 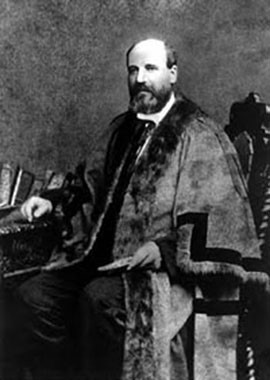 CL: We found out that April 22, 2018, is exactly 120 years since Robert ‘Reschid’ Stanley because of Muslim. We know this because Quilliam recorded it and published it in The Crescent. The British Muslim Heritage Centre has agreed to put on an afternoon where we are going to have free tickets. We want to invite everyone around Manchester to come on down and hear about this man. We want this to be for Muslims and non-Muslims. It’s about him being part of Islam and part of caring about the world community. Because he cared so much about the horrific things that were happening to Muslims at that time.

AI: Despite his good works Reschid Stanley became a ‘person of interest’ to the authorities when his views on international and current affairs differed from those of the British Government at the time. He faced the question Muslims are challenged with now; Is it possible to be both Muslim and a good citizen in the West?

CL; Absolutely! Its almost going back to the Norman Tebbit ‘cricket test’ isn’t it? Why can’t you support two teams? Since when have we the right to say ‘if you are not with us you’re against us’? We are a mixture of everything and must be in order to discover and to be interested. The duty on us now is to get our children to challenge us as well.

AI: And now you’re writing a book about his life.

CL: Yes, we’ve set up a LaunchGood crowd fundraiser to help with research

AI: Do you have a message for others who may have a relative who had converted and who may have concerns about having Islam in their immediate family.

CL: Put down the newspapers! Stop watching the television, go and talk to some people! Go and ask questions and listen, listen, listen.

To support the research into the life of Britain’s first Muslim mayor go to: (https://www.launchgood.com/project/a_victorian_secret_muslim_revealed#!/)

To attend the event on April 22 in Manchester you can reserve here: https://www.eventbrite.co.uk/e/120-years-conversion-to-islam-a-family-secret-robert-reschid-stanley-tickets-44388843225