William Henry Quilliam, a Liverpool solicitor and resident embraced Islam in 1887 (aged 31), taking the name Abdullah. His community work for the poor and his ability to communicate Islam to a western audience earned him the title: Shaykhul Islam of the British Isles.

In 2014, The Abdullah Quilliam Society, Brougham Terrace, reopened the original site of the mosque and orphanage. In March 2018 the Department for Digital, Culture, Media and Sport upgraded 8 Brougham Terrace to Grade II*, reserved for “particularly important buildings of more than special interest” thanks to the renovation work.

AboutIslam: In 2002, you entered the mosque for the first time. Describe how that felt.

Mumin Khan: The first day we went in it was cold and like it was haunted, empty. Inside the masjid was dark and bleak. It had been used as a records office so there were shelves where marriage and birth certificates had been kept. The rest of the building was partitioned off as office space.

AboutIslam: How did the once beautiful and functional Islamic center fall into disrepair?

Mumin Khan: When the building was vacated in 1999, the council left it empty. Thieves stole the lead guttering, pipes and old roof slates. The torrential rain in 2005 got inside. Humidity grew and everything bubbled up.

AboutIslam: What is the significance of the Abdullah Quilliam Society ?

Mumin Khan: This is the birthplace of Islam in England. Preserving this heritage in the 21st century is an honor both in the religious and the humanitarian context. Shaykh Abdullah Quilliam was really serving humanity at that time. Probably the very first person to introduce legal aid to the UK. There were a lot of illegitimate children in those days. He would chase the paternity order from the fathers so the mothers could received upkeep for the children. And he wouldn’t charge a penny for that. He was Gods servant any way you look at it. To preserve this history, as a Muslim, is a very important thing.

AboutIslam: How much has been invested so fair and how much more is required?

Mumin Khan: 1.4 million pounds has been spent on the building because of the heritage it has. It has a Grade ll listing, therefore everything you touch costs money. The heavy Victorian cornices are very ornamental and decorative. These cost around £4,000 per room. Equally the plaster is not the ordinary plaster. It is lime plaster mixed with horse hair which takes 3 coats per room. The material used to revive the original character of the building is expensive.

AboutIslam: What is your long-term vision and who will benefit from the return of the first mosque in England?

Mumin Khan: To complete the renovation (across all floors) will cost around £700,000 and this will bring it to absolute glory. We will have a library focusing on the work of Abdullah Quilliam who wrote hundreds of books digitized by the British library. The other two rooms will be a heritage museum, where we will feature artefacts related to Abdullah Quilliam. He used to have an organ in the masjid, he had a printing press for all hits materials and we will replicate those. On the other side there will be a pictorial history of Islam especially for school visits. We have a lot requests from schools sometimes we have to say no for health and safety reasons…

AboutIslam: The property now has a functioning masjid, student accommodation upstairs and small wudhu area. It also has two kitchens. Any plans for those?

Mumin Khan: We have two Victorian kitchens which are half destroyed. With one, we want to replicate how the Victorian kitchen was in 1800’s. We want children to see how the Victorians lived and cooked, it’s a great learning tool. We are dedicated to preserving heritage and history for Muslim and British indigenous people in general. In the basement we are creating a commercial kitchen and there will be a cafeteria on the ground floor. 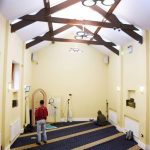 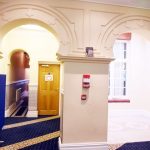 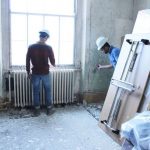 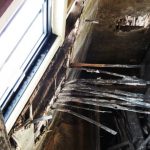 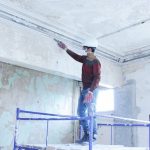 AboutIslam: In 2017 a Liverpool MP told Parliament almost 40% of children in his constituency are growing up in poverty. Will this center help local people?

Mumin Khan: It’s a shame to say but in an advanced country like Britain we have people who do not have daily food on their plate. Every day Abdullah Quilliam fed very poor local people and 500 children who were being educated there. We are going to feed the homeless and poor every week from the commercial kitchen. The masjid will provide food following the path of the Prophet (SAWS).

AboutIslam: Seems your organization has a long-term vision beyond bricks and mortar.

Mumin Khan: Liverpool communities have health issues related to stress, poverty and loneliness. We want to develop the attached building on Brougham Terrace into a health, well-being and woman’s center. On the two floors above there will be hotel apartments (without alcohol) to generate income for the masjid.

AboutIslam: Sounds impressive. Anything else?

Mumin Khan: If we can own the land opposite, we will establish a GP referral center and open a chemist. At the same time we are looking at creating a Middle Eastern souq [market] and shopping center. So the area becomes an ‘Abdullah Quilliam Quarter’. Visitors would have a mosque, a well-being center, a place to stay, to live, to eat and medical facilities.

AboutIslam: Do you have a message for Muslims around the world about this opportunity to revive a piece of our history?

Mumin Khan: Abdullah Quilliam Society is looking for business partners and investors for the next stage. Please come and see England’s first mosque. Allah SWT has given us the will to do good work come and join this masjid and make it a beacon of light in Great Britain.

To find out more about the history of England’s first mosque and support the work of the Abdullah Quilliam Society go to: http://www.abdullahquilliam.org/