“It’s history making, the first Muslim rom-com, so it’s going to hopefully pave the way for many other similar stories,” Osamah Sami, the movie writer, told AAP on Monday, October 31.

“Not just from the Muslim community but from other communities and minorities in our society.”

The movie, Ali’s Wedding, is based on the true story of Sami, who also plays Ali, the Melbourne-based son of a Muslim scholar who tells a lie that sets off a cringe-worthy chain of events.

It discusses Ali’s arranged marriage which lasted for less than two hours.

Finding it hard to describe how it feels to see his life on the screen, Sami is eager to see how others respond.

Sami previously told Fairfax Media that his “affectionate and poignant story of love” was about casting a more positive light on Muslim-Australian life.

“A couple of Muslims stopped us and asked, ‘Is this bringing a bad name to Muslims again?’,” says Sami.

“That just shows how much they are fed up with the negative stereotype that we consume in the media.”

The film came about after director Tony Ayres overheard Sami telling Claudia Karvan about his arranged marriage that lasted just one hour and 40 minutes while they were shooting the telemovie Saved in 2009.

It has been co-written by Andrew Knight, and it’s the first to be directed by Jeffrey Walker, who has also directed TV shows like Modern Family and Jack Irish.

Funded by the Adelaide Film Festival, it had its world premiere in Adelaide on Friday and will be in cinemas early in 2017. 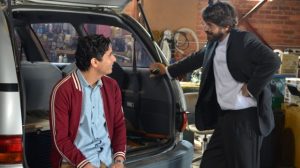 The movie co-star, actress Helena Sawires, said she hopes the film will break down misconceptions about the Muslim community.

Playing Ali’s love interest Dianne, she said her Egyptian heritage helped her connect with some of the film’s gags immediately.

“I think it’s good for people to get insight into how it all is,” Sawires, who is not a Muslim, said.

“You know there’s so much, for lack of a better word, demonizing of this sort of world.

“This film is such a perfect example of showing, we’re humans, we live life just like everyone else does.” 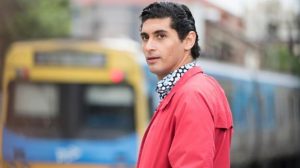 Offspring and East West 101 star Don Hany plays Ali’s father, who he said was part of a movement of Muslims finding their identity in Australia.

Falling in love with the movie since the outset, Hany described the movie as so funny and full of meaning.

“I literally couldn’t put it down. It’s something that I guess happens every now and then but it’s more rare than not,” he said.