JAKARTA – Muslim charities have launched relief campaigns to help those affected by the 7.0 magnitude earthquake which killed over 90 people on the Indonesian island of Lombok and injured hundreds more.

“Many areas are inaccessible so the death toll will, unfortunately, be much higher than is currently being reported. There are thousands of people who have not received any aid at all,” Islamic Relief’s Country Director in Indonesia, Nanang Dirja, said in a statement on the charity’s website.

Thousands of people have been displaced after a 7.0-magnitude earthquake struck the Indonesian island of Lombok and nearby Bali on Sunday, August 5.

Two days after the quake destroyed thousands of buildings and left at least 105 dead and over 230 seriously injured, rescuers are searching for survivors in the rubble.

In the appeal launched by Islamic Relief UK, Dirja detailed urgent needs on the ground.

“There are massive needs on the ground; mainly clean water, food, shelter and mosquito nets. Many houses have collapsed and people are sleeping in the open air. Thankfully it’s not raining, but it will be soon and that will be a massive problem for all those who have lost their homes, and for the aid efforts,” he said.

He added: “I have just received reports and a video about a collapsed mosque in North Lombok, where it is stated that 40 bodies are trapped inside.”

Another British Muslim charity, Muslim Hands, has also launched an appeal to help those affected by the disastrous earthquake. 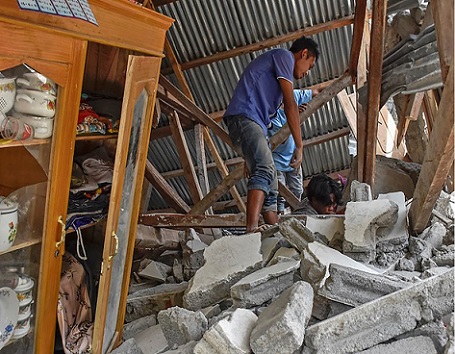 “There is an urgent need for essentials such as food. Muslim Hands teams have established a community kitchen serving victims with daily cooked food including rice, beef, and vegetables,” the charity said on its website.

Though its field office has been damaged in the earthquake, Muslim Aid, another British Muslim charity, said they were working on the group to provide help, urging people to donate and support their mission.

“Our field office has been damaged but our staff continue to help save lives. We need your support more than ever to rescue those trapped in the area,” the charity wrote in the appeal published on its website.

“This is a race against time. Your donation can help save lives,” it added.