Allah has shown me that true Muslims do care about American Muslims of color.
aaa

Do American Muslims of Color Even Matter?

In fact, the racism I’ve personally experienced was often so blatant that I recently said to an American Muslim friend, “Being around Muslims from other countries has made me grateful for the racism I experienced from non-Muslim Americans. At least as a culture, Americans recognize the need to be ashamed of what they’re doing.”

Though I continue to be inspired by my parents’ message of “living love,” it is often difficult to reconcile what I learned about Islam from my parents with what is being taught about Islam through the actions of other Muslims. My experience in American Muslim communities populated mostly by immigrants from predominately Muslim countries suggests that the racial hatred and injustices that necessitated the Civil Rights Movement and the ultimate recognition of Black History Month are being perpetuated in the homes and communities of Muslims every day.

How was it that I sat through MSA meeting after MSA meeting, listening to Muslim students implore everyone to give time and money to events aimed at raising awareness about the suffering in Palestine and Kashmir, but the mere idea of talking about something that would raise awareness about Islam itself was dismissed solely because the topic included Black Americans?

How was it that I sat in the women’s area of a masjid awaiting the start of prayer, and I heard children of the imam discussing the ugliness of brown skin? How was it that my White friend who recently became Muslim was confronted in the masjid and asked, “Why would you marry a Black man?”

Yet these same Muslims complained about Islamophobia and the racial profiling of Muslims post 9-11. Ironically, the very civil rights that Muslim American immigrants are so passionate about securing for themselves exist largely due to the sacrifices and efforts of the very race of people that they feel “nobody” cares about.

My parents grew up Christian, and as adults, they were part of the African-American generation that spearheaded the Civil Rights Movement in America. They witnessed powerful personalities like Malcolm X and Martin Luther King, Jr., and they lived through the tragic assassinations of these remarkable men. They lived through the infamous separate-but-unequal Jim Crow laws, where people of color had to use water fountains and restrooms that were separate from White people, and they were allowed to shop, dine, and attend school at only certain places distinguished as open to “colored” people.

In the mid-1960s, my parents were introduced to the Nation of Islam, then headed by its original leader, the late Elijah Muhammad. Like the journey of Malcolm X detailed in his book The Autobiography of Malcolm X, my parents were intrigued by the organization’s message of Black dignity and superiority in a world that was designed to erase the strength and pride from this powerful race of people. 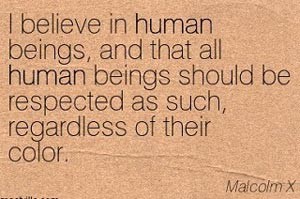 Like most American Christians, my parents’ first introduction to the concept of God was through the church. At that time, most American churches depicted a White, blond-hair blue-eyed man nailed to a cross who was said to be Christians’ Lord and Savior, Jesus Christ.

The culture of the church offered much social and emotional stability for my parents and other African-Americans, but the depiction of God as both human and a member of the very race responsible for their persecution was difficult to reconcile with what their hearts believed about their Creator. So when they heard about the NOI’s concept of Black divinity, it made much more sense than worshiping their oppressor.

However, in 1975 as he neared death, Elijah Muhammad dismantled the NOI and appointed his son Warith Deen Mohammed as the leader of the African-American organization for the purpose of teaching them orthodox Islam. By Allah’s mercy, my parents were amongst the pioneers who left the teachings of Black divinity and embraced the belief in Allah and Prophet Muhammad, peace be upon him—and I was born this year.

When I first arrived in Saudi Arabia and felt alone and out of place, I went to the masjid and stood next to an Arab woman, whose first words to me were, “Are you American? Welcome.” And when my family was in need, a Saudi family helped us without question or hesitation though we had never met before then.Though I have had many discouraging and hurtful encounters with Muslims from predominately Muslim countries, I have also had many inspirational and supportive experiences with Arabs, Pakistanis, and Muslims from all over the world; and it is these experiences that give me hope that Muslims can represent “living love” to themselves and the world.

After I got married and moved to a new city in America, my first friends were two Pakistani-American women who introduced me to other Muslims and drove me to Islamic classes and events. My first Qur’an teacher was an amazing Canadian woman whose family was from Pakistan and whose Egyptian-born husband started a now famous Islamic learning institute whose classes were so inspirational that I was often moved to tears; and both of them remain amongst the most thoughtful, kind neighbors I’ve ever had.

And closest to my heart is my beloved friend who is a scholar of Qur’an from Sudan with three ijaaza’s (certificates of authentic memorization and recitation), who has tirelessly dedicated her time to assisting me in my desire to obtain an ijaaza of Qur’an myself. And she refuses to accept a single payment from me though she is one of the most sought after Qur’an teachers in Egypt and Saudi Arabia.

So yes, Allah has shown me that true Muslims do care about American Muslims of color, because they care about all Muslims regardless of the color of their skin. And despite the inevitable faults and sins of Muslims from every culture, including American Muslims of color, there remain Muslims from all over the world who “man up” to their responsibilities and thus share with the world what it means to spread Islam’s message of “living love.”