Families are falling apart left and right, and it’s no secret that the most popular assumption always puts the wife at fault.
aaa

“Hello, welcome to the ‘Single Moms’ club, how can I help?

No, I’m sorry, there are no support groups or training courses available at the moment.

No, I’m afraid there’s no monetary compensation either. No social life, no holidays, no bonuses and no extra perks are included in our package.

What’s the upside you ask? Hmmmm we are still trying to figure that out. But on the bright side, we do get a lot of criticism, judgmental looks and some down right humiliating sympathy! Would you like to fill an application to join the club?

I remember as a little girl, the word ‘divorce’ caused more of a shock than finding out tooth fairies don’t exist! But at this day and age, marriages reaching a sudden halt are as common as car crashes on highways; we hear about it one minute and go back to munching on chips the next.

Families are falling apart left and right, and it’s no secret that the most popular assumption always puts the wife at fault. That’s exactly the moment when these divorced single mothers start feeling like they’re ‘alone’ alone, suddenly left to pick up the pieces, and walk the walk of shame amongst a society that mostly tends to assume these women must have done something horrible to deserve such a gloomy fate.

The Start of An Inevitable Ending

Ending it all is hardly ever an easy decision. A husband and wife don’t just wake up on a beautiful morning and say, “You know what sounds like so much fun? A divorce!”. In fact it’s a gruesomely difficult step that leaves them both scarred for a long time. No one is excited about failing, but sometimes you’re left with no other option than to let go and walk away.

And as much as a wife is expected to stuff her feelings down her throat and suffer silently for the sake of the kids, sometimes she just can’t do it. Sometimes the divorce isn’t even her choice to start with! No one knows the battles and struggles that happen behind closed doors except for God, the husband and the wife.

And maybe the mother in law.

And yes probably the best friends, too.

The neighbors also since they stick their ears to the doors and listen to the fights.

But other than that no one really knows.

It’s so NOT a joking matter. Being a single mom myself, I know how people treat and judge divorced women. They’re practically viewed as outcasts, vultures trying to steal husbands or just vulnerable easy targets. The news sets off a danger sign flashing on their foreheads, as if they’ve become a different species ready to attack planet Earth!

But does anyone really understand what these women have been through before it all happened? Is there perhaps a book named “The Upside Of Divorce’ that we can learn the rules from? Whether it’s because the husband is abusive or because the wife can’t cook or the families don’t get along, who are we to judge if the reasons are valid or not? In one instance, our beloved Prophet himself did not even ask questions….

Narrated by Ibn `Abbas: The wife of Thabit bin Qais came to the Prophet (PBUH) and said, “O Allah’s Messenger! I do not blame Thabit for defects in his character or his religion, but I, being a Muslim, dislike to behave in un-Islamic manner (if I remain with him).” On that Allah’s Messenger (PBUH) said (to her), “Will you give back the garden which your husband has given you (as Mahr)?” She said, “Yes.” Then the Prophet (PBUH) said to Thabit, “O Thabit! Accept your garden, and divorce her once.” (Sahih al-Bukhari 5273)

So am I saying every unhappy woman should ask for a divorce and feel good about it? No! ABSOLUTELY NOT! Divorce is permissible in Islam but you know what else? It’s ‘detestable’ and for very good reasons, too.

It’s the kids who pay the price, and the grandparents who drown in sorrow and the mother who is left with an even bigger burden to carry. She is faced with the ugly truth that no one could portray except those who have been down that same path; the realization that facing the world alone with a family to take care of is no walk in the park. It’s excruciatingly difficult in a way that’s just indescribable. 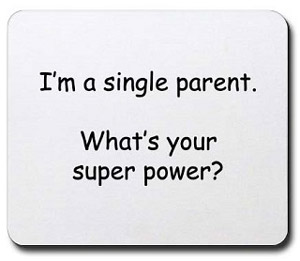 A woman feels lost and unshielded, even if she has her family’s support. She is expected to be both the ‘strict dad’ and the ‘soft mom’ at the same time, which really confuses the kids. She spends her mornings anxious to make ends meet, her evenings listening to the kids’ demands and complaints, ‘mom, mommy, mommmm, mommy’ and then spends most of her nights scared something bad might happen or just exhausted from playing too many roles at once. It takes unimaginable strength to be able to survive that without breaking down.

Try living in the West and explaining to the handyman it’s un-Islamic to be alone with him while he’s doing his job. We aren’t allowed to date potential grooms, let alone the mess caused by anxious parents, ex-husbands and ex-wives. All the options are downright agonizing:
1- Raise the kids alone.

2- Marry someone else and hope the kids won’t resent him.

3- Go back to the ‘Ex’ and risk failing again

A part of me hopes this article would deter anyone contemplating divorce. Another part wishes that people would see the truth; single moms did not call the quits to find ‘happiness’, many of them just wanted to escape the ‘unhappiness’. Let’s stop digging for dirt and offer a helping hand instead.

It’s high time for Muslims all around the world to start embracing their sisters who didn’t ‘fail’ but rather faced downfalls like everyone else. It’s time for fathers to step out of their ‘honorary guest’ roles of either spoiling the kids out of guilt or moving on and forgetting they exist all together. Things need to change. Let’s stop punishing each other for our choices and misfortunes, and be there for one another, the way God intended us to….

To all the members of the ‘Single Moms’ club, I’m sorry you had to join….

We don’t compare ourselves to these blessed women but we certainly find hope in their stories. So stand tall and stay on the right path. Raise devout Muslim kids who respect their fathers and understand just how Merciful Islam is. Take care of your loved ones’ hearts and don’t worry… Allah will take care of yours…