With Trump’s xenophobia and the presidential elections, American Muslim organizations train youth to be politically active in their communities.

“Of course, I want to run for a public office. It is my long term goal. This is my calling!” said Saif Hamideh, a resident of Florida, with enthusiasm.

Hamideh, who is in his early twenties, represents a new wave of American Muslims who aim to change the country in a time-honored fashion: by engaging with it. He got the bug to be elected by working with Emerge USA, an organization founded in 2009 and currently directed by a former civil servant, who wanted to change the perceptions of Muslim Americans who are seen as aloof from their communities, and he sees his group a quintessence to counterattack growing Islamophobia.

“Islamophobia is not something happening to us; we are contributing to it,” Tamim Chowdhry, the Emerge USA Executive Director noted. “The quicker we define civically engaged American Muslim, and the quicker we build our own narrative as Americans; the quicker the Islamophobes will stop.”

Hamideh, whose parents are from Jordan, testified in opposition to the foreign law in front of Florida’s Senate 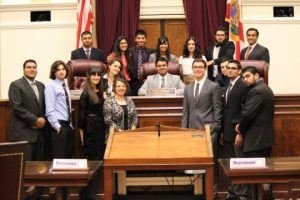 Government Oversight and Accountability Committee. When he was 15 years old, Hamideh first learned about Emerge USA through its fundraising dinner. Since that night, Emerge USA revamped his life that he switched his college major from economics to political science. Moreover, with Emerge USA’s help he joined an internship as a liaison between Obama’s “Organizing for America” campaign and Florida mosques convincing Muslims to vote.

By increasing the Muslim voters, Emerge USA intends to remedy a seeming lack of political engagement in the Muslim American community. Chowdhry justified that a large part of the Muslim community does not vote probably because the majority may have emigrated from countries that do not have democracy.

Consequently, Emerge USA Leaders program teaches crucial skills, such as public speaking, community organizing, advocacy, and how to communicate with elected officials. By internships and jobs across the state, the program graduates gain hands-on experience. Surprisingly, Chowdhry assured that Emerge USA accepts non-Muslims as well. By the end of 2016, it will have branches in Florida, Texas, Virginia, and Pennsylvania.

Hamidah advises Muslims to attend the public meetings or the city-commission meetings. “Find a local community candidate for city commissioner or mayor on a local scale who you like. Volunteer in their campaign, hold signs, ring bells, and make phone calls for them,” he explained.

Not only Emerge USA which aims to shape a new generation of Muslim leaders, but also other grassroots organizations like Council on American–Islamic Relations (CAIR) and the Islamic Civic Association (ICA). However, ICA focuses on the non-political civic services which the Muslims usually prefer.

“The youth need to receive training in faith activism. Not just in activism, but also in their faith,” Zahra Billoo, CAIR-California Director added. She proposed training the youth on the boards of non-profit organizations or mosques.

Similar to ICA, many mosques lean not to be involved politically. For example, Masjid Al Noor, a mosque in New York, organizes food and blood drives, clothes donations, and contributions to the March of Dimes. Also, its youth group organizes campaigns for distributing Christmas gifts in orphanages and elderly nursing homes.

“The society sees us as monsters because of the media,” said Deena Mansour, one of Masjid Al Noor teachers dreadfully.

Accused of belonging first to Al Qaeda and then to ISIS, one of the masjid’s youth group girls was bullied at her school because she wears hijab.

Hamideh said that Muslim girls can definitely learn through Emerge USA how to combat hijab discrimination. Excited to help in organizing a campaign or a march for hijab, he said that he can help; however, one of those girls has to lead the movement.

“Such campaigns will work and have an impact. This is how change in America happens: peaceful movements,” Hamideh concluded.

This is article first published at http://us.blastingnews.com/