aaa
Q I am considering Islam but I have not converted yet. I am still reading about Islam and Muslims. I want to go the mosque to learn more. I am not sure about people's reaction to this. So I am not sure if I will be welcome in a mosque if I am not Muslims. Please advise. Have any converts had the same concern before their conversion?

Short Answer: You are most welcome to visit a mosque if your intention is good and you have respect for the place. If you enter with respect, taking off your shoes, your presence should not cause any problem. In my case, after venturing into the mosque for the first time, I became used to the people and the place and, over time, got to know many of the Muslims there.

It is a delight for me to answer it if this may help you in a small way to come closer to accepting Islam in your life.

In fact, it would be better to say that you are most welcome to visit a mosque if your intention is good and you have respect for the place and for the worship that takes place there.

The only people who would not be welcome to visit would be those whose intentions were to show disrespect to the place or to Islam.

Of course, if anyone plans to cause harm to those present, he is not welcome.

I think this is quite reasonable and that it would be true of all religious places, wouldn’t it?

Your visit would be very interesting, because I am sure you would be surprised about many things.

The first reason you will probably be surprised will be by the place itself.

Whilst many mosques seem grand and splendid from the outside, there is, in fact, very little to see inside a mosque.

The prayer hall, where public worship takes place five times a day, is actually very plain, because of the nature of Islam itself.

You will find no statues, nor paintings, nor depictive stained glass. There is no altar, nor elaborate robes, nor candlesticks.

The prayer space will be carpeted and clean, since people will be putting their foreheads on the ground in worship of their Creator.

In some of the grander mosques, these carpets may be works of art in themselves, but most mosques just have a simple carpet of one color, with horizontal lines showing the places for the rows of prayer.

Key Features of the Mosque

The direction of Makkah, in which all Muslims have been commanded to pray by Allah Almighty, will be obvious by the mihrab, which is usually a small niche in the wall, indicating the direction of prayer.

At one time, Muslims used to pray in the direction of Jerusalem, but Allah Almighty revealed to Prophet Muhammad (peace be upon him) when he was taken by night to Al-Aqsa Mosque, that the prayer direction from that moment on would be the Kaabah in Makkah.

By the way, Muslims don’t worship the Kaabah.

It can do them neither good nor harm but, as the first house built on earth in worship of Allah, it is the unified direction in which Muslims pray.

The other feature in the mosque will be the minbar, or pulpit, from which the sermon is given on a Friday.

This can be elaborate or simple, but its function is simply to allow the preacher to be seen and heard when he gives his sermon.

The Simplicity of Worship

The second reason I think you will be surprised will be because of the simplicity of the worship that takes place in a mosque.

In a mosque, Muslims pray together in worship of their Creator. It is a pure worship, not needing popes or priests or intermediaries of any kind.

The one who leads the prayers will be a simple man from among the congregation, chosen by them because of his knowledge of Islam and the Quran, and because of the assumed uprightness of his life.

His duty is simply to lead the prayers, which all those present will say in exactly the same way when they are in their homes.

There are no hymns or hymn sheets, nor Orders of Service. In fact, the prayer is quite brief, but individual Muslims may choose to stay on to make their own private prayers or to recite verses from the Quran.

The third reason I think you may be surprised is by how unlike a church or a temple the mosque actually is, in terms of how people behave.

People do not speak to one another in hushed tones, nor put on gloves or fancy hats.

As well as a place of prayer, the mosque is a meeting place and a place of rest.

You may find people talking there, sitting together in groups, or even lying on the floor asleep.

The mosque is a living place, not a museum or a relic.

So, your question need not cause you to fear.

Muslims Should Welcome You In The Mosque

It is true, however, that many Muslims may be unused to seeing non-Muslims in their midst in the mosque, and they may wonder what you are doing there.

In the current climate of distrust and suspicion which exists between many people in the world, some of the Muslims might even think you are there to cause trouble. 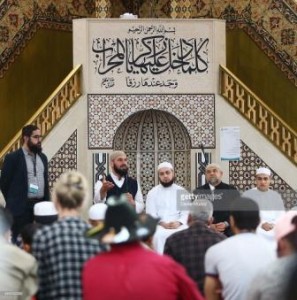 As I have said, though, if you enter with respect, taking off your shoes so as not to dirty the place where people will be praying, your presence should not cause any problem.

If the people there speak your language (I am assuming you will visit a mosque in your own country), you might even approach someone to explain what you are doing there.

On the other hand, for your first visit, you might prefer just to be quiet and watch what is going on.

Many before you have had the same curiosity, only to find that they have been warmly received and have returned time and time again.

This was certainly the case in my own experience.

After venturing into the mosque for the first time, I became used to the people and the place and, over time, got to know many of the Muslims there.

It was in that same mosque that I eventually declared my own Shahadah and became Muslim.

I hope, then, that this has allayed some of your fears and will encourage you to visit a mosque soon. This will be another step on your journey to Islam.

(From Ask About Islam’s archives. Br. Tawfiq passed away in 2016. May Allah show him mercy and grant him the highest level of paradise, Ameen!)

The 7 Roles of the Mosque