"Every day I ask Allah to make me a better Muslim." Being religious is neither weird nor extremist nor fanatic; it is about trying to help those around us, about having peace and tranquility in our hearts.
aaa

“The sweet, beautiful, and gentle message of Islam touched my heart and we should allow it to touch all our hearts and make us sweet to others.”

This was the message of British former Roman Catholic priest Idris Tawfiq to a packed lecture hall at Manchester University earlier this year.

His talk was part of a program of events for Islam Awareness Week, an annual event organized by the University of Manchester Islamic Society.

Tawfiq interwove the tale of how he became Muslim with beautiful descriptions of the love, peace, and joy he found in Egypt living among the Muslims who were in soothing contrast to the normal images of Islam and Muslims seen in the media. He acknowledged the climate of suspicion:

“I have been told that in every speech on Islam given in Britain, there is a policeman. So be very nice to your neighbor. He may take the Shahadah and become Muslim later.”

But he emphasized that “Islam has nothing to hide. Muslims have nothing to fear.” There are no Muslim terrorists, just as there are no Roman Catholic terrorists. Even when Muslims are under attack and suspicion around the world, there is no reason to fear or worry, because we know that Allah is in control of all things.

Tawfiq spoke with affection of his past as a Roman Catholic priest that shaped the person he is today, and his audience with Pope John Paul II where he held onto his hand so hard that he pulled his papal ring off!

He described Pope John Paul II as a man of integrity and justice who spoke for the oppressed and who was beloved of the Muslims living in Rome. He told the audience that they should not be afraid of the goodness in others, which comes from Allah, but be at the forefront of talking to all people, of goodwill or ill will.

His encounter with Islam came after he had left the priesthood and gone on holiday to Egypt. He had gone to Egypt simply because it was a cheap holiday, but during the week he spent in Cairo, he met Muslims for the first time in his life and found them, contrary to the stereotype, to be sweet and gentle people, and he was amazed by the widespread religious devotion, which he had never met before in his life.

Everyone in the railway station prayed when the Adhan (call to Prayer) sounded, and on Friday, the coffee shop completely emptied, including the staff who went to pray in the mosque over the road and left him alone in the unlocked shop. He was impressed by the love and affection he saw in people, their contentment and happiness, and the way in which religious phrases sprinkled their speech, bringing continual reminders of Allah throughout the day.

When he returned to England he taught religious education in a state comprehensive school. He had to teach about all faiths, including Islam, and he had to learn about the religion before he could teach it. The more he learned the more he liked it, and after a while he found himself being overcome with emotion when he mentioned the beloved Prophet Muhammad.

He was drawn further into Islam when the Muslim pupils at the school wanted to use his room for prayers in Ramadan and the head master instructed him to “keep an eye on them.” Soon, he was fasting to keep them company, and during prayers at an iftar party on Laylat Al-Qadr, he felt a peace that was “as if an angel had walked into the room.”

Soon he was going to Regents Park Mosque for study circles, which he liked very much. After one talk given by Yusuf Islam, Tawfiq approached him and asked, just out of curiosity, not because he wanted to take that step, how to become Muslim.

So Islam asked him a few questions and ascertained that he believed in Allah and that he had been fasting and knew the prayers in Arabic. He turned to him and said, “Brother, who are you trying to fool?”

Then the Adhan came for Maghrib Prayers, and when the brothers prayed, Tawfiq sat at the back and wept. Allah had touched his heart and he repeated the Shahadah — La ilaha illa Allah, Muhammadan `abduhu wa rasuluh — (There is no true God but Allah and Muhammad is His servant and messenger.) At that moment he found happiness, peace, calmness, joy, and community such as he never found before.

Turning to the subject of Islam in Britain, Tawfiq commented that Islam is no threat to Britain but can make Britain better. He stressed the need for Muslims to show a good example to those around them: “When we forget about the beauty of Islam, others are not impressed.”

Muslims must exemplify brotherhood and gentleness, and place Allah at the center of their lives: “Every day I ask Allah to make me a better Muslim.” Being religious is neither weird nor extremist nor fanatic; it is about trying to help those around us, about having peace and tranquility in our hearts.

He asked Muslims to be gentle with new Muslims, as with all people, describing them as newborn babies. We can best teach people by example, not words. He talked about his puzzlement when, in his early days as a Muslim, he was given some advice by different groups of Muslims. He stressed we must not divide ourselves into groups. We are all just Muslim. 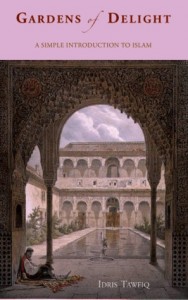 Turning to the outpouring of love and affection for Diana, Princess of Wales, after her sudden, tragic death in a car accident, Tawfiq argued that people identified with her as a friend, even though they never met her, because they knew of her from the media as a kind and warm-hearted woman with a tragic history, and that they mourned not so much her death but the death of goodness and the values “that in their hearts they wanted to see in Britain.”

As a priest, Tawfiq had presided over numerous funerals, and he commented that never had anyone said about the deceased “he had seventeen pairs of shoes” or “he had a really good job and went on holiday three times a year.” Rather, people remembered the dead person as a loving father, or an honest worker, or a kind person.

The goal of Muslims in life is to carry on through the harsh realities of life to become good people, and their hope and prayer is that when their time on earth is over, they will look back on a life well lived, hoping to hear, as it says in the Quran: