Short Answer:  The real answer to your question lies in what we accept as the real revelation. The Quran and the four chosen Gospels do disagree on some points. Muslims see the Quran as the final revelation of Almighty Allah to mankind. It confirms and corrects all that had gone before. The Quran calls mankind to the worship of the One God, without partner or equal.

Many thanks for your question and for contacting Ask About Islam.

It is interesting because you rightly say there are some big differences between what the Gospel says and what the Quran says about both Jesus and Muhammad (peace be upon them both).

Your question assumes, of course, that what the Gospel says is true.

We need to address this first of all in order to answer your question properly.

What the Gospels Say

Of the many Gospels which were written, the early Christian Church chose four which best represented what it believed about Jesus.

Of these four, only two mention Jesus’ birth.

Matthew’s Gospel says that the birth of Jesus was announced to Wise Men from the East, who traveled to Bethlehem with gifts of Gold, Frankincense and Myrhh.

Luke’s Gospel account, on the other hand, talks of angels announcing the birth of Jesus to some shepherds “abiding in the fields, keeping watch over their flocks by night.”

In his account, the announcement of Jesus birth is made to Mary by the angel Gabriel (who, by the way, is seen only by Mary).

What do Muslims make of this, then?

Well, Muslims reverence and honor Jesus (peace be upon him) as a Prophet, sent by God to tell people how to live and how to worship.

They believe that God (Allah, in Arabic) sent such messengers throughout the course of human history.

To one of these messengers, Moses (peace be upon him), a book was written, which detailed the message. In the same way, the message revealed to Jesus was written down.

Muslims believe, though, that these books have been so translated over the centuries, and even deliberately altered by religious people, that they now differ greatly from what was originally revealed.

Muslims believe, though, that the Quran was intended for all people and for all time.

The original Quran has never been translated, and thus was never altered, over time (altered translations of the meaning of the words have been made for those who do not understand Arabic).

In proof of this there are countless copies of the Quran from different centuries and different parts of the globe. They are all exactly the same.

Muslims depend on the Quran, then, for the accurate account of things that happened. If things in the existing Gospels agree with the Quran then Muslims accept them as true.

If they differ from the Quran then Muslims reject them as false. Where there are things in the Gospels of which the Quran says nothing, Muslims have no way of knowing if they are true or not.

For Muslims, then, what the Quran says about Jesus and Muhammad (peace be upon them both) is believed to be the revelation of God.

What other books, such as the four chosen Gospels, have to say is rejected by Muslims if it contradicts what the Quran says.

In saying that the Gospels and the Quran “deviate so much upon what Jesus said and what Muhammad said” you are summing up this difference, since Muslims believe that the Gospels have indeed deviated over time what was originally revealed.

In the Quran, the birth of Jesus is announced to Mary by “angels.” Gabriel is not mentioned by name.

Jesus’ birth is recognized by Muslims as extraordinary and it is fitting that such a birth be announced in such a way.

Muhammad’s birth, whilst foretold long before, is a normal birth of two parents.

In this translation of the meaning of the words, the Quran tells us that the coming of Muhammad is actually foretold by Jesus:

{And remember, Jesus, the son of Mary, said: “O Children of Israel! I am the messenger of Allah sent to you, confirming the Torah, and giving glad tidings of a messenger to come after me, whose name shall be Ahmed.} (As-Saff 61:6)

In Arabic, the names Ahmad and Muhammad mean the same thing, “the Praised One.” Muslims see this as Jesus foretelling the coming of Muhammad.

As you know, John’s Gospel talks about the coming of the Comforter/ the Paraclete, which the Christian Church has chosen to interpret as the Holy Spirit.

As for why, no one else saw the Angel Gabriel when he appeared countless times to Muhammad, God only knows. 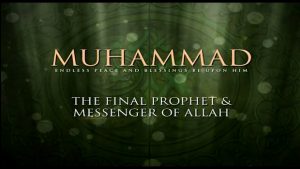 There are, of course, many accounts by those who were with Muhammad when he was receiving revelations. They describe the extraordinary way he was overcome and how he looked and behaved. However, none of these people actually saw the angel.

It is, in fact, one of the remarkable things about Muhammad’s life that he was able to converse so freely with the angel (Jibreel in Arabic).

So, in short, the real answer to your question lies in what we accept as the real revelation.

The Quran and the four chosen Gospels do disagree on some points.

Muslims see the Quran as the final revelation of Almighty Allah to mankind. We believe it confirms and corrects all that had gone before. The Quran calls mankind to the worship of the One God, without partner or equal.

Just as a final comment, we also need to remember that Muslims and Christians do agree on so many things. This should never be forgotten.

We both agree that Jesus was a truly great man, who brought a message from God.

Whilst we can agree to differ on what separates us, we should never forget what unites us. People of faith have more in common with each other than we often realize.

Story of Mary – The Striking Similarity in Bible and Quran

Loving Jesus or Muhammad – Can I Have Both?