I knew I could grow to love Muhammad at least as much as I loved and will always love Jesus.
aaa

Many Christians who were raised in a Christian home and nurtured with the love of Jesus by their parents or the Christian community, may find it very difficult to leave this spiritual affection and sense of belonging with anything or anyone else.

It is through his love that Christians embody kindness, compassion and religious devotion.

In fact Jesus is the center of their lives and all else fall under his umbrella. This is a great sense of security many feel in Christian faith.

In my years of practicing Christianity, I also felt this love, compassion and peace through loving Jesus. But unlike my Christian friends, I was unable to pray to him and ask him for my needs. It just did not feel right for me.

Learning about his life and teaching really made me a much better person. I wanted to embody all the good things he taught his followers.

I decided to even memorize many of his sayings and repeated them often.

But I kept my relationship with God, my creator separate. My supplications went to God who sent a human role model for me to follow. That was my limit.

Unable to solve the Trinity puzzle I moved on to Islam, which gave me the thumbs up that my time with Christianity was not in vein, and how I perceived Jesus and God was correct. So, I continued loving my beloved Jesus while I was getting to know Prophet Muhammad (peace be upon them both).

To my amazement, I found that the core principals of Muhammad’s teachings were so similar to that of Jesus. I thought if 3.5 years of Jesus ministry on earth cultivated so much love in my heart for him, how about the 23 years of Muhammad ministry during his prophethood?

I did not have to struggle to find out which one to love more. Allah gave me the answer by stating in numerous places that Muslims have to believe in all the Prophets and messengers of God, equally, without distinction, regardless of where or when they appeared.

{We make no distinction between them (the prophets)}.

Allah also is most Wise and urges us to put our focus on the message of the Prophets. Coming to understand that the core of their message was all the same: “You shall worship only one God,” the personal relationship of a worshiper with his/her Prophet should not go beyond human element and at no point this love should compel us to exalt our Prophets to level of divinity.

Understanding that the Quran was the only Holy Scripture that was unchanged, I had to take to heart every word in it – especially the words of Jesus who is reported to have said to his disciples in various verses:

So, I knew I could grow to love Muhammad at least as much as I loved and will always love Jesus.

My love for Muhammad grew as I got to know his actions, personality, loving kindness, forgiving heart and bravery. It was as if he completed what was left out in my mission of searching for closeness to my Creator.

Can I Have Both? 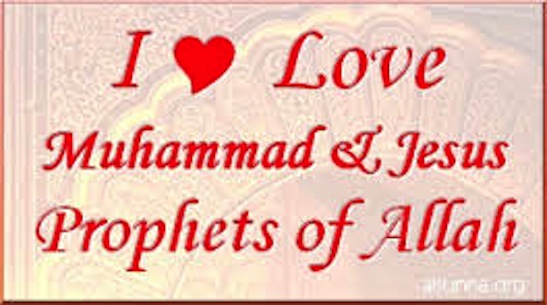 Many Christians have found that Quran fills the gap of missing answers that was not fulfilled until they discovered Islam. Yet, their affection and attachment to Jesus may hinder them to take a step toward a more permanent commitment to another religion.

As for my own case, I never felt I had to abandon loving Jesus exchange for following Muhammad. I could have both.

In fact I had the best of both worlds: loving Jesus, while following Muhammad’s teachings without assigning divinity to either. I felt I was a winner!

Having understood that the message of all the Prophets was to direct the worshippers toward only one Creator, I could easily see that the Quran followed the pattern and also told the stories of people of the past who shun the messages of their Prophets and worshiped whatever and whoever they liked.

In fact Jesus had confirmed that he had come to confirm what was given before him and had come as a sign from God.

And [I have come] confirming what was before me of the Torah and to make lawful for you some of what was forbidden to you. And I have come to you with a sign from your Lord, so fear Allah and obey me. (3:50)

I had to sneak into my Bible and check again to see what Jesus said. When his disciples asked him who to worship, Jesus replied:

“The Scriptures say, ‘You must worship the LORD your God and serve only him.'” (Luke 4:8)

Case closed. I was in Islam both feet without losing my love for Jesus.

I was very sad to make a shift from wanting to be around my Christian friends to needing to be around people who strengthen me in believing and following a very straight forward monotheistic religion without struggling with the confusing doctrine of three gods in one. This group was non but Muslims.

Twenty five years since I made my commitment to follow Islam and adhere to its tenets, I am still in communication with some of my Christian friends from long time past. We do not try to convert one another, but have respect for each other’s path. This also includes some of my own family members.

At the beginning, I had a very hard time to stop studying the Bible even after I returned to Islam. It had become a habit for me.

Upon consulting a Muslim scholar, he suggested to focus on the Quran in order not to get confused. “Once you are firmly grounded in your religion of Islam, you can then refer to other scriptures for the purpose of comparison and dialogue with adherents,” he said.

I also found that understanding a deeper science of the Quran and all the wisdom behind it takes time and commitment. One reaps the fruits of their harvest according to quality time they spend nurturing the crop.

It was clear that in order to achieve my goal I had to be very critical of my reading selection. I had to stay focused and learn. This enabled me to also teach others and encourage them to arrange their lives around the Divine Book of Allah instead of the other way around.

My search mission was completed when I realized I had found the perfect religion.

…This day have I perfected for you your religion and completed my favor on you and chosen for you Islam as a religion… (Quran 5:3)