Before any decision we have to make, we hear a voice that shows us the way and directs us toward what is right. From the moment we wake up in the morning, wherever we may go and whatever we may do, this voice accompanies us.

Nobody else can hear it but that voice speaks to us of justice, moral virtue, humility, honesty and sincerity; in short everything that is good.

This internal voice that shows us the way and commands us to do what is right is the voice of the conscience. In one verse of the Quran, Allah speaks of “the two paths.” (Quran, 90:10) In other words, in addition to a voice calling one to goodness, there is another calling one to evil. Knowingly or otherwise, people either follow the path of our Lord, their consciences, or else that of corruption, satan.

Allah also reveals in the Quran that He reveals depravity and the means of protection against it: And the self and what proportioned it and inspired it with depravity or piety. (91:7-8)

The word “depravity” means “sin and rebellion, unbelief, mendacity, the abandonment of the truth, moral collapse and the opposite of piety. In other words, the concept of depravity includes all the negative attributes of the lower self. In essence, it is the exact opposite of conscience.

Inspiration of the Heart is a Blessing from Allah

The voice of the conscience is in fact Allah’s inspiration to everyone, a form of revelation, in other words: In that sense, everyone, and even every living thing, receives revelation, although that revelation is not a verbal one, of course. In contrast to the revelation that came to the prophets, this is inspired in the heart.

Allah says in the Quran that he sends revelation to some living things:

{Your Lord revealed to the bees: ‘Build dwellings in the mountains and the trees, and also in the structures.} (16: 68)

Through revelation, Allah inspires bees how to build their hives and where to find food. He reveals to ants how to live as a colony, how to raise their young and how to build magnificent ant cities. As revealed in the verse, all living things act and know what to do through Allah’s inspiration.

One of the verses of the Quran on this subject concerns the mother of the Prophet Moses (peace be upon him):

{We revealed to Moses’ mother, ‘Suckle him and then when you fear for him cast him into the sea. Do not fear or grieve; We will return him to you and make him one of the Messengers’.} (28:7)

{…and when I inspired the Disciples to have faith in Me and in My Messenger, they said, “We have faith. Bear witness that we are Muslims’.} (5:111)

A Blessing that Distinguishes between Right and Wrong

Inspiration from Allah is a blessing that leads the believers to goodness and permits them to distinguish between righteousness evil.

Since the conscience is inspired by Allah, it is common to all people and by means of the conscience, Allah reveals to everyone the finest and best behavior that is most pleasing to Him. Yet some people are weak and overcome by their lower selves, and end up following the path of satan. These people have some surprising characteristics in common. For example, they dislike anything that is legitimate. 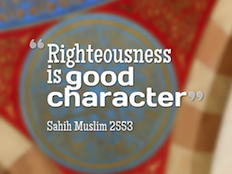 They prefer unlawful earnings to lawful ones, obtain food and drink through theft rather than legitimately and run red lights rather than stopping at them. Acting in violation of the laws bestows an explicable delight on people who choose not to heed the voice of their consciences. Yet Allah loves those who live legally, who heed their consciences in other words.

People who live illegally, in opposition to the voice of their consciences, carry the grubby signs of not living in a clean and honest manner, and their immorality is reflected as a darkness in their faces. Such people’s minds and foresight are inevitably shrouded, their behavior is unbalanced and they can never find happiness.

If someone is honest and sincere and abides by his conscience, then he will also be a balanced person.

Someone who acts in line with his conscience will know how to avoid evil and thus always act correctly. However, the commands of one’s conscience may sometimes conflict with one’s own interests; a person of deep faith will resolve that conflict by heeding his conscience. Those who follow the prompting of their lower selves, however, come up with all sorts of excuses to avoid heeding their conscience, even though they know that this is the best and proper course.

One can often see instances of this. For example, someone who does not use his conscience may well decide against running to help the injured if he witnesses a road accident, fearing that he may be held responsible for it and may end up being arrested.

Yet someone with a lofty conscience will face any risks to try to get to those people and help them, and will never invent any excuses not to.

Someone knows in his heart, or conscience, that if he fails to help those people when he has the opportunity to do so, he will be responsible for their deaths.

From the moment he becomes conscious, everyone is responsible for making the best use of this blessing that Allah inspires in his heart. Someone who starts to understand events going on around him, and who acquires the power of judgment, also possesses the ability to distinguish between the lower self and the conscience and the will to heed that conscience.

Let us not forget that we are all responsible for our decisions, actions and words, that we will all be questioned on the Day of Reckoning, that those people who heeded their conscience, the revelation in their hearts in other words, will be worthy of His eternal paradise.