A day after its launch, the Egyptian SunBank was described by the famous online reviewing website TechNIBLogic as the “world’s smartest solar portable charger”.

Newcomers to any market must focus on gaining a competitive advantage over their contenders. SunBank’s Egyptian inventor and CEO of Happiana, Mahmoud Saied, informed Aboutislam.net that SunBank is the first solar charger that can wirelessly charge up to two devices simultaneously by means of a smart sticker placed on their backs.

Charging happens quickly by means of its custom-designed and aesthetically appealing solar panels. SunBank is a smart device that includes a mobile application that helps users with any common problems they face with their chargers and devices. 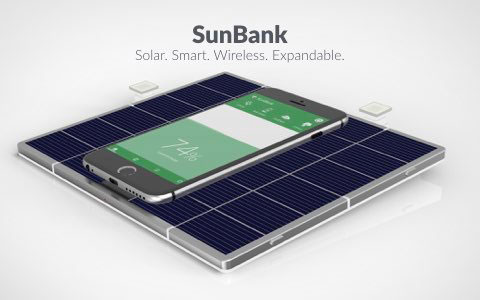 “Happiana’s market survey showed that people often forget their chargers at home,” says Saied. By connecting phones to SunBank via Bluetooth, the application periodically checks whether the user is carrying his SunBank.

It also notifies the user when the battery’s charge reaches a critical level. Egyptian designers are also working on synchronizing the application with the phone’s calendar to notify the user to charge his SunBank if he is going out after sunset.

The power bank is composed of a main panel with a battery capacity of 6,400 milliamp Hours (mAH) and two solar cells with a power of 4.5Watts (W).

The main panel comes with magnets, to which more 2.5W panels can be added for extra power.

SunBank also includes cooling material to protect it from over-heating. It also helps it charge 10-15% times faster than other power banks.

Another interesting feature of SunBank is its ability to stick to any surface by means of sticky pads, so as to avoid falling on the ground or forgetting it somewhere. It can be stuck to your backpack, for example. 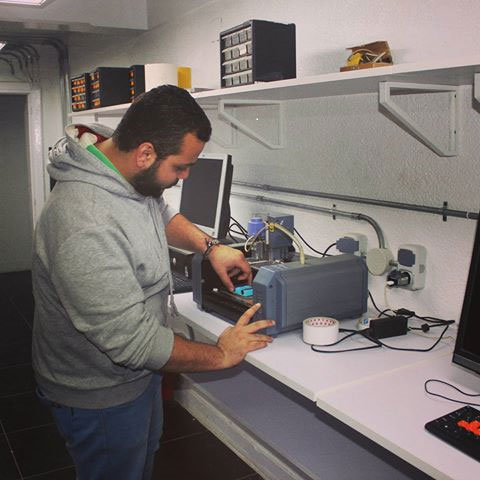 Saied knew early on that he wanted to be an entrepreneur. His bachelor’s degree is in the polluting field of petroleum engineering, but he has a genuine interest in clean energy.

Saied wondered why the use of solar energy was sweeping Europe, while in Egypt this plentiful source of energy remained largely underused.

The use of solar energy in oil-rich countries like the UAE is also on the rise. This made him realize that “solar energy isn’t the future; it is the present.” Most importantly, Saied believed that solar energy could be an inexpensive alternative to electricity in Egypt.

As Steve Jobs has put it a few years ago, “If you are working on something exciting that you really care about, you don’t have to be pushed. The vision pulls you.”

Indeed, Happiana’s vision of transforming world energy production to clean sources is what pulled Saeid to immediately start forming his team the very next day after returning to Egypt last June.

Within weeks, the team was complete and now consists of two petroleum engineers, two applications developers, one mechanical engineer, and one marketer, all working towards the shared mission of integrating solar and wearable technology to create smart products.

Saeid says solar chargers currently sold in Egypt are of poor quality. “I actually went out and purchased every solar power bank available on the Egyptian market and discovered that they all need a minimum of eight to ten hours to charge a mobile device,” he says.

In August 2016, SunBank’s team proceeded to design their solar charger. They wanted the power bank to wirelessly charge devices with the same speed as that of wall chargers. They also wanted it to be chargeable through wall outlets as well as with solar energy. And they wanted to develop a mobile application that would provide helpful information to users.

Happiana is currently relying on crowd-funding. Orders for SunBank are now being received via Indiegogo.com. Happiana must hit a target of 200 monthly orders to proceed with SunBank’s manufacture and assembly. The Egyptian team plans to build a factory to manufacture their product once they receive 2,000 orders.

SunBank can now charge phones, tablets, cameras and smart watches. The next development will be SunBank Pro, which will charge laptops with the same speed as that of electrical outlets.

Happiana is also considering developing the SunBag: a bag that can charge any device placed inside it, without compromising safety or emitting electricity.

Powered with passion and innovation, Egyptian SunBank seems off to a good start in the market of portable solar power banks.