It is only a matter of time when all of us will have a free internet access throughout the entire globe.

Imagine not paying for your internet, being able to access it from anywhere without having to worry about the cost and accessibility; sounds unreal?

The day is not far.

According to their official website, “Access to knowledge and information is a human right, and Outernet will guarantee this right by taking a practical approach to information delivery. Lack of an Internet connection should not prevent anyone from learning about current events, trending topics and innovative ideas.”

Outernet aims to launch hundreds of cubes miniature satellites known as Cubesats into the Earth’s lower orbit. Developing the idea, the company has paired with Oneweb, which will be launching 18 satellites by 2018.

Simply put, the Outernet project seeks to provide everyone with access to broadcasted information by worldwide accessible network through hundreds of cube satellite constellations in low earth orbit.

The idea behind this seemingly noble cause is that each satellite will broadcast the Internet to phones and computers giving anyone across the globe free online access but there is a catch.

Outernet’s immediate goal is to provide the entire world with broadcast data much like a cable TV and not complete access to the web; i.e. users will have access only to certain websites; data would flow one-way from feeders to the satellites which in turn would broadcast to everyone (on any Wi-Fi-enabled device) below including communication updates during natural disaster and emergency situations with the help of hundreds of cubesats launched in the sky.

The clients can only chose from the selections offered by Outernet most of which include news and educational content and not the websites one wants to browse.

The Outernet’s official websites explains this as, “It’s the modern version of shortwave radio, or BitTorrent from space.”

Having said that, their long-term vision is to provide interactive, two-way Internet access and free usage to everyone as and when funds become available.

According to the project group at Outernet, 40% of the world’s population does not have access to the internet; that includes remote islands and villages in remote regions.

For communist countries like China and North Korea, the idea is to provide unrestricted access and circumvent all forms of censorship by providing free and unrestricted internet access as opposed to their current cyberspace laws.

The number of satellites needed to get the project on the road is over hundreds and with tens of millions of dollars being pumped into this project. According to Syed Karim, the Muslim MDIF’s Director of Innovation, “We want to stay as small as possible, because size and weight are directly related to dollar.”

The calculated cost to send a 10x10x10 centimeter satellite into orbit is about $100,000. For the project to be operational, at least a few hundred satellites are required thus, multiplying the cost of each cube satellite into the numbers and the added manufacturing cost.

Per Karim, “Outernet is the modern version of shortwave radio. It uses leading-edge technology to address a deep social problem. As the world moves towards a global knowledge-driven economy, more than 3 billion people are excluded by cost, geography or jurisdiction.

Outernet will increase opportunities for everyone to access digital news and information, allowing greater access to opportunity and education than anything that currently exists.”

Given Outernet’s similarity to Google’s Project Loon, the road towards a successful operational launch seems difficult though not impossible. With Google, Facebook and Outernet, all working towards providing free internet globally in different forms, the motive behind these projects appears more than just a humanitarian effort depending on who will emerge victorious in this gigantic effort. 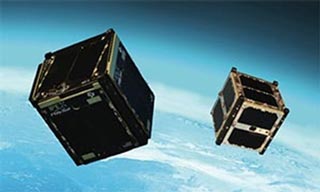 Google’s Project Loon is essentially no different from Outernet. While the Outernet will use cube like satellites to broadcast data, Project Loon aims to use a network of balloons to beam wireless Internet.

Google’s Loon and Facebook’s Internet.org projects not only threaten Outernet with their sheer size but also their offering of free internet over Outernet’s controlled broadcasted data.

Project Loon is a network of balloons that will float in the stratosphere and move along the blowing wind to where they’re needed by rising or descending.

Facebook, on the other hand looks at realizing the “free internet” dream with a fleet of drones to provide internet access worldwide with the acquisition of Ascenta, a UK-based aerospace company.

It is only a matter of time when we’ll know which one of these ‘philanthropic efforts’ will emerge victorious and who will provide what they had originally set out to; free internet access to everyone.

This article was first published in 2014 and is currently republished for its relevance.