Online conspiracy theories are warning of a catastrophic collision this weekend. While the awaited asteroid exists, there is no evidence that it forms a threat.

Dubious corners in the Internet insist that America’s National Aeronautics and Space Administration (NASA) is lying about the nature of the asteroid and its “apocalyptic trajectory”.

In late 2016, rumors began spreading about a recently spotted large asteroid, named 2016 WF9, smashing into Earth by the end of February 2017, triggering a tsunami and destroying megacities.

The asteroid is indeed passing through our Solar System, “traveling from Jupiter through the orbit of Mars on a path to Earth,” according to James Bauer, deputy principal investigator at the Jet Propulsion Laboratory (JPL) in California.

2016 WF9 is a ‘potentially hazardous object’ (PHO), with potential to make a close approach to the earth and a size large enough to cause significant regional damage in the event of an impact.

2016 WF9 was first observed on November 27, 2016 by NASA’s NEOWISE: the asteroid-and-comet-hunting portion of the Wide-Field Infrared Survey Explorer (WISE) mission.

NASA’s Sentry automatic impact monitoring system analyzes the trajectories of all known near-earth objects over a period of 100 years. Although 2016 WF9 was formerly listed on the Sentry Risk Table, indicating a possible risk of impact, it was, as is often the case, soon removed when new observations became available.

“This pass won’t bring it particularly close. The trajectory of 2016 WF9 is well understood, and the object isn’t a threat to Earth for the foreseeable future,” NASA announced last December. 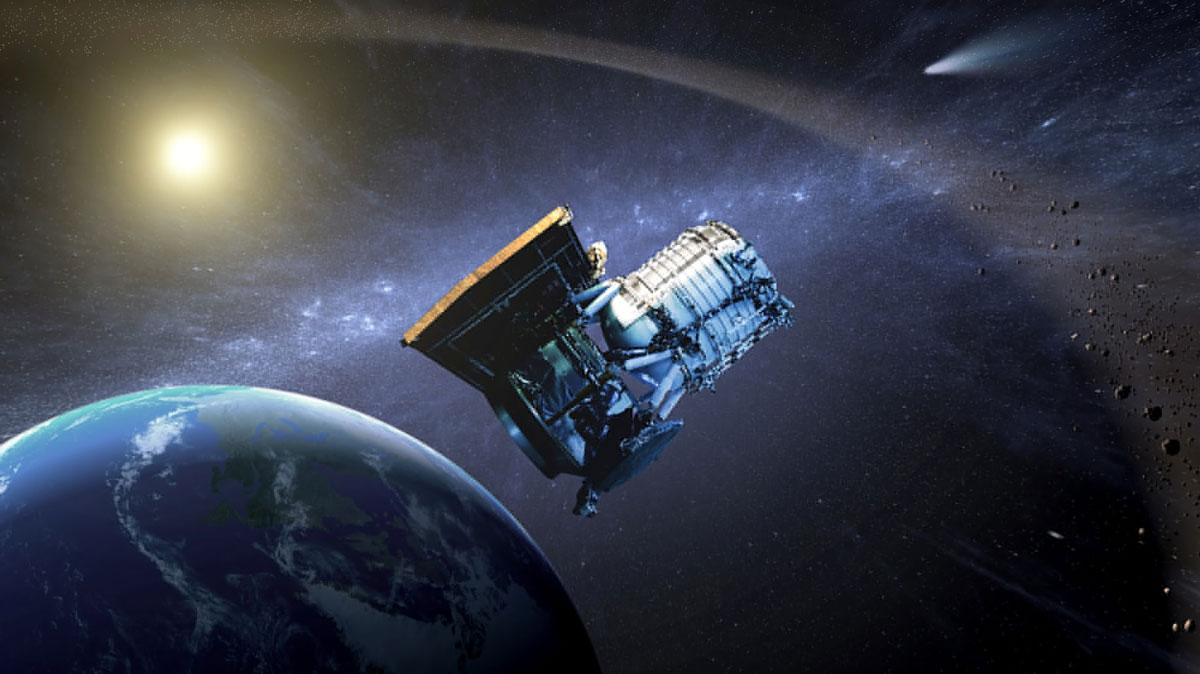 Astronomers identified 2016 WF9 as a relatively large near-earth object (NEO) because its diameter ranges between 0.5 and 1km.

“The asteroid is somewhat dark, and possibly a comet, but without the comet-like dust and gas cloud,” said JPL’s Bauer.

According to NEOWISE, “2016 WF9 could have cometary origins. This object illustrates that the boundary between asteroids and comets is a blurry one; perhaps over time this object has lost the majority of the volatiles that linger on or just under its surface.”

A celestial mechanical simulation of 2016 WF9‘s dynamics over a period of 100 million days (~274,000 years) found that it had roughly a 60% chance of originating from the outer solar system as a long-period comet.

NASA calculations estimate that the asteroid’s orbit brought it within 28 million kilometers of Earth in December 1944. It is expected to come much closer, within nine million kilometers, in February 2149. For comparison, the distance between the Earth and its moon is only 384,400 km. 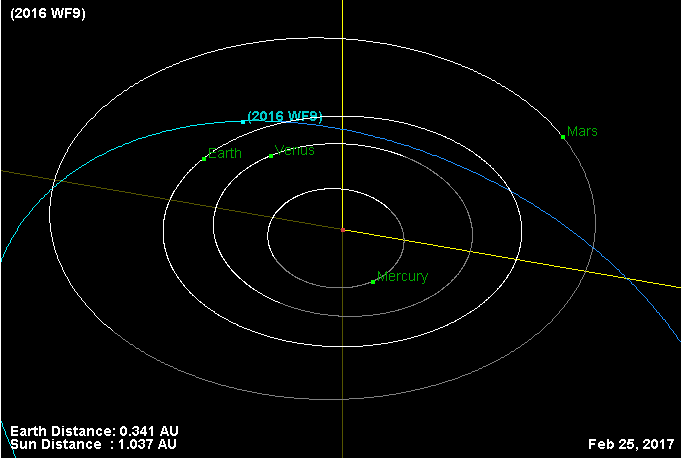 Astronomers know that 2016 WF9 is not on its own. It’s a member of the Apollo group of asteroids. As of November 2016, this group contained 8,180 members. This is, by far the largest group of NEOs, compared to the Aten, Amor and Atira asteroid groups.

Asteroids aren’t numbered until they have been observed at two or more oppositions. Nearly 1,500 Apollo asteroids are large enough and might get close enough to Earth to be known as PHOs.

The February 15, 2013 Siläbe/Chelyabinsk meteor that exploded over the city of Siläbe in the southern Urals region of the Muslim country of Bashkortostan was an Apollo class asteroid. An estimated 1,000 people were injured due to flying glass from broken windows.