Oil | The Oil Zapper was developed by TERI after six years of extensive research.
aaa

It took just three days, after a cargo vessel collided with a tanker, for the oil to coat and destroy the beautiful mangrove trees, in some areas of Sundarbans region of the Muslim country Bangladesh.

Tens of thousands of gallons of oil had spilled into the rivers and creeks of Sundarbans, threatening the rare biodiversity of the region including tigers and dolphins.

The delta is a UNESCO World Heritage Site that encompasses approximately 3,850 meter square (m2), with roughly one-third lying in India and two-thirds in Bangladesh, as per actual dimensions of the area.

So for a science and environment journalist sitting in a talk given to us by  Dr. Banwari Lal, director of environment and industrial biotechnology of the Energy and Resources Institute (TERI) of India during the 15th Delhi Sustainable Development Summit 2015, it was a eureka moment of excitement.

He spoke about the Oil Zapper–what’s that one wondered and then one realizes that man’s mind can also be harnessed for positive solutions for our human mistakes on this planet.

Going back into the history of his work Lal explained that it was around the time when the Kuwait war literally destroyed Kuwait, the entire region had become a mass of black oil lakes.

The soil was toxic and polluted by the crude oil spills and crude oil is thick like honey he explained. That was when the Kuwait government floated tenders and asked to view proposals to do the clean up.

They finally signed an agreement with the Kuwait Oil Company (KOC) in 2012 to clean up which was definitely a backslapping moment for the team.

The Oil Zapper was developed by TERI after six years of extensive research. It zaps crude, sludge, and contains four natural occurring bacterial species. None of them is pathogenic to any living species.

The uncertainty he said was would the microbes not only clean up but restore the land to its former clean position.

The shelf life of these microbes is 4 degrees centigrade (°C) for six months, 30°C for two months, 42°C for twenty days, and 45°C for seven months.

“Bacteria is everywhere, our body is a zoo of bacteria!” explained Lal, “so we needed to figure which bacteria we needed to culture and for which bacteria oil was a special food. Only those that grew in the oil we saved while the rest died. We also needed to be sure of the degradation, so we separated the live ones and fed them oil. It’s a process like a coach selects only the fastest runners for his team.”

Crude has hundreds of hydrocarbon compounds and oil has four major ones. So we selected species to degrade only one fraction and selected different species so they wouldn’t fight. Making a cocktail of these four bacteria we found that they decimated the oil we fed them.

“The Oil ministry wanted to test our findings on the ground, in the field. There weren’t grants forthcoming, as no one was sure of our findings. Finally, the Oil and Natural Gas Corporation Ltd. (ONGC) of India and the Indian Oil Corporation Ltd. (Indian Oil) let us test the waste oil that was being stored in pits and how many more pits could they make. They gave us one pit and asked us to clean it up. Then we mass produced the bacteria and made it in powder form and applied it to the pit. In five days the pit was cleaned!” Lal informed proudly.

In fact the oil wells in farmers’ fields had destroyed the fields and they were happy just living off the compensation, said Lal.

With this Oil Zapper we have created large numbers of job opportunities and ONGC seeing the end product gave us a grant to continue our research. 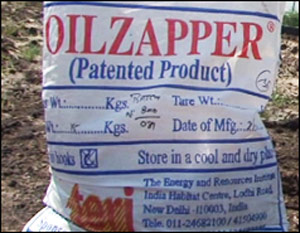 Another important innovation created by Lal and his team was the Microbial Enhanced Oil Recovery (MEOR) and the Prevention of Wax Deposition in Oil Well Tubings (PDB).

“Just like the human body has cholesterol deposit in the arteries of the heart, crude oil which contains wax deposits it on the pipes through which it is pumped out,” explained Lal.

If this problem was allowed to continue, the oil wells would have to be shutdown. It isn’t possible to put a scraper down and push the wax down.

Thus with a research grant, Lal and his team solved the problem by making a coating of the bacteria which would degrade the wax.

The bacteria form a kind of wax according to Lal and these bacteria degrade the wax and clean the oil well tubing. Instead of having to clean the tubes regularly, with this innovation the tubes are cleaned only once a year as explained by Lal.

Every week his team cleans up two to three wells now and this has generated great job opportunity and benefits to the locals.

Thousands of packets of the bacteria are shipped to the various sites that Lal and his team handle and “one packet contains more than the population of humans on this earth!” compared Lal, making the connection in our heads easily.

Of course the Indian professor explained research is ongoing as there isn’t one recipe to fit all. Different climatic conditions require different bacteria.

But what is amazing is that once the bacteria eat up the oil, they become protein and completely mix with the soil, hence completely restoring the area’s soil.

Moreover, Lal showed they can reuse the recovered oil which they collected to run the machines they need for their work.

An amazing innovation where science meets nature’s needs and steps in to restore what man himself has caused and what was earlier considered destroyed forever.