"Coconut products are a blessing in our town, this is one of Allah’s mercies for Mombasa people," said Rashid. (Image credit: Abdullahi Jamaa)
aaa

This article is from the Science page’s archive; it was firstly published in an earlier date.

The weather is whimsical in coastal Mombasa; the sun is biting leaving behind a very tense and humid atmosphere that makes many faces beading with sweats.

But for most people, the remedy for the never-ending thirst in this Indian Ocean neighborhood is drinking fresh coconut water, also known as coconut juice, to cool d 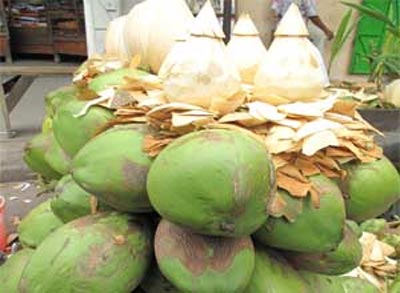 The isotonic solution has been proven to have the same ‘salt’ concentration as the normal cells of the body and this is the reason doctors gave for its quick way in replacing lost fluid easily. (Image credit: Abdullahi Jamaa).

own their bodies in a city where room temperatures always fluctuate above normal range.

“Coconut products are a blessing in our town, this is one of Allah’s mercies for Mombasa people,” Hamisi Rashid, a coconut water vendor, tells Aboutislam.net on a sunny Wednesday.

Rashid, 24, has been in this line of business for the past four years and he knows everything about coconut like the back of his hand.

His strategic highway stop on the island where he serves fresh coconut water on daily basis is a stomping ground for many people, men and women alike.

“Many coastal people take this essential water to quench their thirst because evaporation from the nearby sea results in high humidity most times of the year. When you take normal water the thirst does no go away easily,” he says.

In his daily activity, the enterprising young man whacks the tip of a coconut fruit and the knife he has been using to cut the apex of the crop for years, left a mark in his shirt.

Rashid understands some reasons why the coastal communities here drink the juice of this widespread coastal tree. For some, he says, the tree is the apple of their eyes.

“I understand that people here believe that the juice is a treatment for kidney problems. It removes kidney stones and purifies the urine, they say. Most of my customers are elderly people who are commonly sick with kidney problems.”

One of his frequent customers, Omar Mohamed, says his personal doctor advised him to frequently take the juice following a kidney operation three years ago.

“I am following the advice of my doctor but I also know that a lot has been said about the value of coconut water and I can feel personally that it is working wonders,” Omar said.

Coconut is the fruit of coconut palms, botanically known as Cocos Nucifera. The liquid inside the unripe green fruit is the coconut water. Till this day it is being used as both food and medicine.

This water has long been a popular drink especially for coastal communities throughout the world; from Africa to Asia, Americas to Europe wherever it is abundant and readily available fresh from tropical trees.

While for many around the world it is no more than an ordinary beverage, for some it is arguably the very reason to smile back with renewed hope of living after devastating diseases and illnesses. In recent years scientists across the world have been making important breakthroughs to ascertain the truth about this watery medication.

“With all the books that have been written on the subject of hydration, endurance race nutrition plus numerous articles in peer reviewed journals and magazines, it’s funny to think the answer comes from a ’big nut,’ that is really a fruit,” writes Dr. Ryan Hamlin, a North Carolina Chiropractic, in his personal blog about food, nutrition, sports and health.

The fact that coconut water has medicinal value has really changed the health perception of many people and the market for the juice has been picking up over the past few years in the international food and drinks industry.

“With ambitious scientific researches highlighting the value of coconut water, many people are coming to accept its positive effect on our health,” says Musa Saidi, a local nutritionist in Mombasa.

In fact, many multinational companies are now packaging the juice as the insatiable demand for its refreshment and health effects becomes popular in many countries of the world.

In helping to meet demands for the product in domestic retail markets, international bodies like the United Nations Food and Agriculture Organization (FAO) have taken important steps to boost the sale of quality bottled coconut water by small scale farmers.

In order to understand the medicinal value of coconut water, AboutIslam.net interviewed the founder and director of the Coconut Research Center, an American certified nutritionist and naturopathic physician, Dr. Bruce Fife, who is also considered the world’s leading authority on the health aspects of coconut and related products.

According to Fife, who is also the author of Coconut Water for Health and Healing, the most common problems it treats are dehydration and heatstroke.

The isotonic solution has been proven to have the same ‘salt’ concentration as the normal cells of the body and this is the reason doctors gave for its quick way in replacing lost fluid easily.

“Whenever someone is sick, coconut water is usually part of the treatment to nourish the patient back to health. Interestingly, modern medical science is now confirming the effectiveness of coconut water for many of these conditions,” says Fife.

Because of the nutritional content of coconut water, Fife says that fluids and electrolytes are absorbed quicker and more efficiently into the bloodstream than with other beverages and fluids.

The website of Coconut Research Center describes it as ‘The Tree of Life’ where communities have learned its importance as an effective medicine for thousands of years.

Fife further explained that the fruit contains a variety of nutrients including vitamins, minerals, antioxidants, amino acids, enzymes, growth factors, and other Phytonutrients. 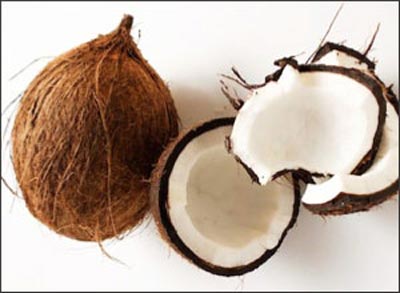 In one of his recent research articles titled “Coconut Water: A Natural Health Tonic,” Fife explained the composition of coconut water.

“It contains more essential electrolytes, less sugar, and does not have any of the chemical additives found in commercial sports drinks.”

Doctors also say that coconut water has long been known for its therapeutic effects on the urinary and reproductive systems. It is reported to clear-up bladder infections, remove kidney stones, and improve sexual vitality.

It also has the ability to improve the health of diabetics. Patients suffering for the disease which affects an estimated 285 million people, corresponding to 6.4% of the world’s adult population, can certainly enjoy the astounding impact of coconut, according to health experts.

“If diabetes is something you deal with personally or know someone who does, this should grab your attention. Coconut Water may help to maintain fluids while decreasing blood sugar spikes in comparison to sugary sports drinks and sodas,” wrote Hamlin.

And yet for those who want to remain young and energetic the isotonic solution has some more brilliant answers as studies have also shown that drinking coconut juices comes with some anti-ageing effects.

“It is the richest natural dietary source of cytokinins. Researchers have suggested the possibility that consuming a rich source of cytokinins, such as coconut water, may produce an anti-aging effect on the body, reducing risk of developing degenerative and age-related diseases,” Fife said.

Some studies claim that coconut water has the power to help in avoiding conditions that may result in more deadly disease like cancer.

In the general scheme of things, many medical researches seem to point to the health benefits of coconut water in its treatment of countless diseases, its effects on improving health of patients succumbing to deadly diseases, and its potential strength to advance the world of medicine.