4.     Islam does not Tolerate other Faiths and Beliefs

Historically, Islam has always respected and upheld the principle of freedom of religion.  The Quran and other principle texts including the traditions of Prophet Muhammad (peace be upon him) preach tolerance towards other religions and non-believers.  Non-Muslims living under Muslim rule are allowed to practice their religion and even have their own courts.

The root of the word Islam (sa-la-ma) is the same root that is shared with the Arabic word meaning peace and security – salam.  In essence, Islam means, submission to the will of God and encompasses the peace and security that comes from living life according to God’s will.

Throughout the ages God sent prophets and messengers to guide and teach their own people.   The main message of all the prophets had always been that there is only One True God and He alone is to be worshipped.   These prophets start with Adam and include Noah, Abraham, Moses, David, Solomon, John the Baptist, and Jesus, peace be upon them all.   God says in the Holy Quran:

{We did not send before you (O Muhammad) any messenger but We revealed to him: ‘none has the right to be worshipped except I, therefore worship Me.’} (Quran 21:25)

However, the true message of these prophets was either lost or got corrupted over time.   Even the most recent books, the Torah and the Gospel were adulterated and hence they lost their credibility to guide the people to the right path.   Therefore 600 years after Jesus, God revived the lost message of previous prophets by sending the Prophet Muhammad with His final revelation, the Holy Quran, to all of mankind.  God Almighty says in the Quran:

{We have not sent you (O Muhammad) but to all mankind as a giver of good news and as a warner, but most people do not know.} (Quran 34:28)

{Whoever seeks a religion other than Islam, it will never be accepted of him, and in the Hereafter he will be one of the losers.} (Quran 3:85) 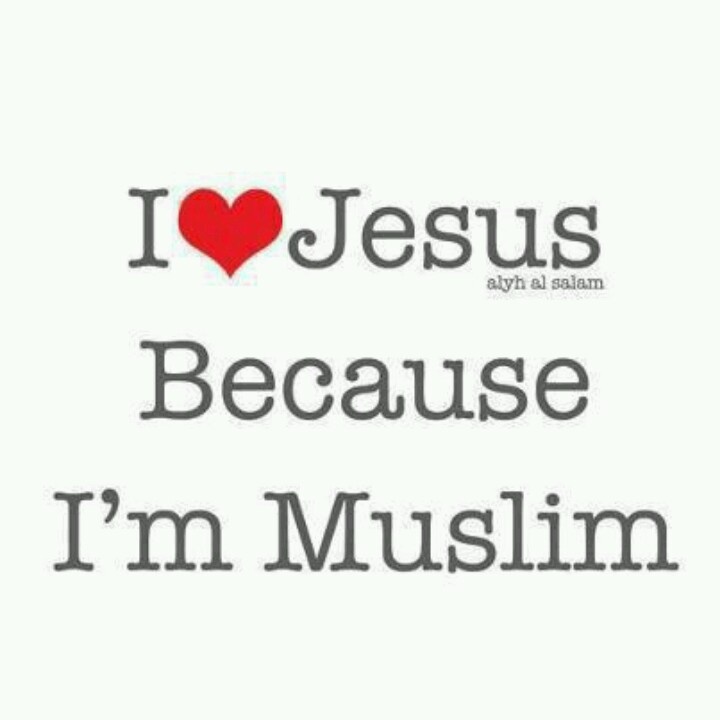 Muslims love all of the prophets; to reject one is to reject the creed of Islam.   In other words,  Muslims believe in, love, and respect Jesus, who is known in Arabic as Eesa.   The difference is that Muslims understand his role according to the Quran, and the traditions and sayings of Prophet Muhammad.  They do not believe that Jesus is God, nor the son of God and they do not believe in the concept of Trinity.

Three chapters of the Quran feature the life of Jesus, his mother Mary and their family, and each one reveals details of Jesus’ life that are not found in the Bible.  Muslims believe he was born a miraculous birth without a father to virgin Mary and never claimed to be the son of God or said that he should be worshipped.   Muslims also believe that Jesus will return to earth in the last days.

This claim was made for the first time by Prophet Muhammad’s opponents.  They were desperate to protect their interests that were being over shadowed by Islam and were trying to spread doubt about the Quran’s divine authorship.

The Quran was revealed to Prophet Muhammad, by the angel Gabriel, over a period of 23 years. God Himself addresses the assertion in the Quran itself.

{And when Our clear verses are recited to them, the disbelievers say of the truth (this Quran), when it reaches them: ‘This is plain magic!’ Or they say: ‘He (Muhammad) has fabricated it.’…} (Quran 46:7–8)

In addition to this Prophet Muhammad was an unlettered man, that is he was unable to read or write. God also mentioned this in the Quran.

{Neither did you O Muhammad read any book before it (this Quran) nor did you write any book…} (Quran 29: 48)

The Quran is filled with astonishing facts, so in order to prove that Prophet Muhammad did not write the Quran we ask how a seventh-century CE could man could know things that have only recently been accepted as scientific truths.   How could he have known how rain clouds and hailstones form, or that the universe is expanding? How was he able to describe in great detail the different stages of an embryo’s development without modern inventions such as the ultrasound machine?

The Muslim community lead by Prophet Muhammad did not have a symbol.  Caravans and armies used flags for identification purposes but it was a solid colour usually black or green.  Muslims do not have a symbol representing Islam the way the cross represents Christianity or the Star of David represents Judaism.

The Crescent moon symbol has historically been associated with the Turks and before Islam it was a feature on their coins.  The crescent moon and star became affiliated with the Muslim world when the Turks conquered Constantinople (Istanbul) in 1453 CE.  They chose to take the city’s existing flag and symbol and make it the symbol of the Ottoman Empire.  Since that time the crescent has been adopted by many predominantly Muslim countries and wrongly become known as symbol of the Islamic faith.

Deluded people sometimes refer to Allah as a modern interpretation of an ancient moon god.  This is categorically untrue.  Allah is one of the Names of God and is referred to by this  name by all Arabic speaking people including significant numbers of Christians and Jews.  Allah is in no way associated with moon worship or moon gods.

There is scant information about the religion of the Arabs before Prophet Abraham but there is little doubt that the Arabs wrongly worshipped idols, heavenly bodies, trees, and stones.   The most popular were deities known as Manat, al-Lat, and al-Uzza, however there is no evidence linking them with moon gods or the moon.

The Arabic word for war is not jihad.  The use of the words ‘holy war’ by uniformed people might have its basis in the Christian use of the term during the Holy Crusades.   The term Jihad is the Arabic word that means to struggle, or to strive.   It is often described as being of several levels.  Firstly, an internal struggle against one’s self in an effort to become closer to God.  Secondly it is a struggle to build a Muslim community based on social justice and human rights.  Thirdly it is a military or armed struggle.

The armed struggle can be defensive or offensive.  The defensive jihad is fought when Muslim lands are invaded and the lives of people, their wealth and honour are threatened.   So the Muslims fight back the invading enemy in self defence.   In the offensive jihad those people are fought who oppose the establishment of Islamic rule and from Islam reaching the people.

Islam is a mercy for all of mankind and came to bring people out from the worship of stones and humans to the worship of One True God, from the oppression and injustices of culture, people and nations to the equality and justice of Islam.   Once Islam has been made accessible to people, there is no compulsion in accepting it – it is up to the people.