Then the time came when preaching had to be accompanied with physical action.  Abraham planned a bold and decisive blow at idolatry.

The Quranic account is slightly different than what is mentioned in Judeo-Christian traditions, as they say for Abraham to have destroyed his father’s personal idols.[1]  The Quran tells that he destroyed the idols of his people, kept at a religious altar.  Abraham had hinted at a plan involving the idols:

And, by God, I shall circumvent your idols after you have gone away and turned your backs. (Quran 21:57)

It was time for a religious festival, perhaps dedicated to Sin, for which they left the town.  Abraham was invited to attend the festivities, but he excused himself:

So, when his peers left without him, it became his opportunity.  As the temple was deserted, Abraham made his way there and approached the gold-plated wooden idols, which had had elaborate meals left in front of them by the priests.  Abraham mocked them in disbelief:

“Then turned he to their gods and said: ‘Will you not eat?  What ails you that you speak not?’”

After all, what could have deluded man to worship gods of his own carving?

“Then he attacked them, striking with his right hand.”

The Quran tells us:

He reduced them to fragments, all except the chief of them.

When the temple priests returned, they were shocked to see the sacrilege, the destruction of the temple.  They were wondering who could have done this to their idols when someone mentioned the name of Abraham, explaining that he used to speak ill of them.  When they called him to their presence, it was for Abraham to show them their foolishness:

He said: ‘Worship you that which you yourselves do carve when God has created you and what you make?’ 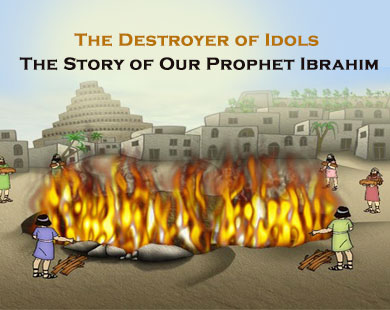 Their anger was mounting; in no mood for being preached to, they got straight to the point:

“Is it you who has done this to our gods, O Abraham?”

But Abraham had left the largest idol untouched for a reason:

“He said: ‘But this, their chief has done it.  So question them, if they can speak!’”

When Abraham so challenged them, they were cast into confusion.  They blamed each other for not guarding the idols and, refusing to meet his eyes, said:

“Indeed you know well these speak not!”

So Abraham pressed his case.

He said: ‘Worship you then instead of God that which cannot profit you at all, nor harm you?  Fie on you and all that you worship instead of God!  Have you then no sense?’

The accusers had become the accused.  They were accused of logical inconsistency, and so had no answer for Abraham.  Because Abraham’s reasoning was unanswerable, their response was rage and fury, and they condemned Abraham to be burned alive,

“Build for him a building and fling him in the red hot fire.”

The townspeople all helped in gathering wood for the fire, until it was the largest fire they had ever seen.  The young Abraham submitted to the fate chosen for him by the Lord of the Worlds.  He did not loose faith, rather the trial made him stronger.  Abraham did not flinch in the face of a fiery death even at this tender age; rather his last words before entering it were:

God is sufficient for me and He is the best disposer of affairs. (Al-Bukhari)

Here again is an example of Abraham proving true to the trials he faced.  His belief in the True God was tested here, and he proved that he was even prepared to surrender his existence to the call of God.  His belief was evidenced by his action.

God had not willed that this be the fate of Abraham, for he had a great mission ahead of him.  He was to be the father of some of the greatest prophets known to humanity.  God saved Abraham as a sign for him and his people as well.

We (God) said: ‘O fire, be coolness and peace for Abraham.’  And they wished to set a snare for him, but We made them the greater losers.

Thus did Abraham escape the fire, unharmed.  They tried to seek revenge for their gods, but they and their idols were in the end humiliated.