Ibn Taymiyyah wrote a large number of books; he wrote more than three hundred books. He had a vast knowledge and wrote many classificatory books and literary works.
aaa

One day, in the ancient city of Damascus a father was planning to go for a picnic with his family told everybody to get ready, but his son suddenly disappeared, so they had to go out without him. When they came back at the end of the day, they blamed him for not going out with them. He said, pointing to a book in his hand:

“You did not benefit anything from your trip, whereas I memorized all this book in your absence.”

He was known for his physiognomy, sharp memory and wittedness which amazed the people of Damascus and made them admire him more and more. Though he was young, his fame reached the neighboring territories. Once, one of the scholars of Aleppo visited Damascus. The scholars and dignitaries of the city went to welcome him. He told them:

“I heard in other territories of a boy who is quick in memorizing everything. I came here to see him.”

They led the man to the small school where the boy used to go to memorize the Quran. The scholar sat for a while until the boy passed with a big board in his hand. The scholar called him, so he went to him.

The scholar took the board from him and said to him:

“Sit here son, and I’ll relate to you some Prophetic narrations to write.” He dictated for him some, then he asked him to read them.

The boy started reading from the board. Then the Shaykh said to him:

The young boy then started recounting the narrations from his memory exactly like he was reading them from the board. The scholar told him:

He cited more of the Prophet’s narrations and asked him to repeat them. The boy did the same again; he read it from the board and then from his memory. The scholar stood up saying:

“Should this boy live long, he will have a great position [become a great scholar]. We’ve never seen anyone like him before.”

This boy was later to be the tortured scholar, Ahmad Ibn Taymiyyah who acquired his knowledge from the best scholars of his time. He studied the Hanbali school and no one surpassed him in it. He also studied the main books of the Prophet’s narrations and tradition such as the authentic narrations reported by Al-Bukhari, Muslim and others.

Ibn Taymiyyah was a devoted person who very much observed the acts of worship. He never let anything distract him from worshipping Allah. He used to spend his night alone, imploring his Lord, continuously reciting the Quran and performing prayers, mentioning and invoking Allah, and observing the optional late night prayer.

Ibn Taymiyyah wrote a large number of books; he wrote more than three hundred books. He had a vast knowledge and wrote many classificatory books and literary works. He used to write up to four notebooks a day. One day, he managed to write the “Ar-Resalah Al-Hamawiyyah” (The Hamawi Treatise) which is made up of seventy medium sized pages. He wrote it between the time of Dhuhr and ‘Asr prayers. He wrote all his books during the seven years he spent in prison, except the book of Al-Eemaan, (The Faith) which he wrote in Egypt.

Ibn Taymiyyah was keen to do every kind of good deeds. Every week, he used to visit those who were ill especially those in the hospital. He was known for his asceticism and benevolence. He loved to give whatever he had whether it was little or much. Even when he had very little, he gave it in charity. He used to donate whatever he had. If he had nothing to give, he used to take off some of his clothes and give them to the poor. 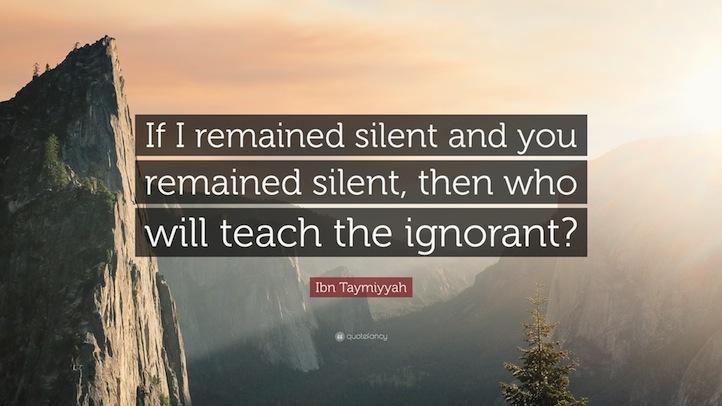 Despite his poverty, he never accepted any donation from a king or prince. He didn’t save any money for himself; neither had he saved any furniture nor food.

Ibn Taymiyyah was famous for his courage, valor, and brave initiatives. Whenever he went out for Jihad (struggling in the Cause of Allah) with the Muslims, he used to be in the front line, encouraging the warriors and arousing their determination and enthusiasm. He took part in conquest of ‘Akkah and showed much bravery that proved his strong faith and love for participating in Jihad.

When Qazaan, a Tartar king, took a number of Muslims as captives, Ibn Taymiyyah, may Allah have mercy on him, went to him, rebuked him for this act and requested him to set the Muslim captives free and the king did.

Ibn Taymiyyah had a difficult life full of continuous trials, calamities, and tests. No sooner did one calamity end then a new one emerged. As soon as he is released from one prison, he is again locked up in another.

Towards the end of his life, some people plotted against him because of his opinion about prohibiting people from visiting the graves of the Prophets (peace be upon them) and righteous people. So they spread a rumor among the people that he belittled the Prophets (peace be upon them). Accordingly, the judges of the four schools of Egypt ordered that he be imprisoned. So he was locked up in Damascus citadel.

In that citadel, Allah inspired him with the understanding of many meanings of the Quran and the basics of knowledge that many scholars would have wished to have.

During his captivity in the citadel, he used to say: “If I gave as much gold as that which would fill this citadel, I wouldn’t have been grateful enough for this grace of being imprisoned.”

When he was reminded of the people who had hurt and caused his imprisonment, he said: “I can never reward them for the good they brought to me.”

Ibn Taymiyyah remained in jail in that citadel for about two years till he died in 728 A.H. At the time of his funeral prayer in the mosque, the soldiers surrounded the funeral to protect it from the overwhelming crowds. The number of people kept increasing till they filled up all the alleys, streets and markets. May Allah have mercy on this great scholar.